Michael Woolaway. But you may know him by a different name, Woolie. See, Woolie is one of Dues Ex Machina’s best builders, bar none. His creations have a character to them that is easily recognizable, making for a trademark style. It’s not to say all his builds are the same. Instead, it’s more like a handcrafted signature, detailed right into the machine. That’s how I knew from the second I saw it, this MV Augusta was definitely a Woolie built machine.

Being the US Motorcycle Design Director at a shop as prolific as Dues Ex Machina is no easy task. To excel at said job is an even greater hurdle, one that Woolie leaps over with ease. His creative niche has seen him build bikes for all sorts of Hollywood A-list actors, as well as projects purely for passion. So it seems like natural progression for a company known for making beautiful bikes straight from the factory to contact someone with Woolie’s talents to build something remarkable.

MV Augusta is one such brand. The Italian manufacturer has been building machines that are drop-dead gorgeous since, well forever. While their machines are always jaw-droppingly beautifully they also have a tendency to run like a scolded pack of cats. They say you can have cheap, fast, beautiful but you can only pick too. Well, MV played that game and they definitely didn’t pick cheap. The brand has always charged a premium for their machines because frankly they are engineered to a higher quality. There was a time when this was directly reflected by their performance in GP racing. And in that time they also had one of the greatest riders to ever live, riding their machines.

Giacomo Agostini is still regarded as the very best to ever throw a leg over a motorcycle. And for good reason. The man has 15 world championships to his name. The Italian has built a legacy on records that have yet to be beaten. And while he likely could have done this on any machine, there is no doubting that being onboard an MV Agusta in the 60’s definitely helped. So it’s only fitting that MV would want to celebrate their racing success, and in doing so they would want to celebrate the man that brought it to them time and time again. And that is where Woolie and his crew come into view.

MV Agusta contacted Dues Customs with a proposal. MV wanted a bike that celebrated their racing history, and it didn’t need to be street legal in the process. So the company sent over a brand new Brutale 800 RR and unleashed Woolie to do his thing. Create some art out of metal. And Woolie did just that. First, they had to tear the MV down before they could rebuild it. Since this was a ‘track’ bike all of the street legal accessories like lights and license plates could hit the dirt. Once all of those components were gone it was time to give the MV a new look.

Naturally deleting all the unnecessary components gave the Brutale a much sleeker appearance as well as a lighter footprint. Up front where a headlight would reside now sits a blank number plate, ready for some race stickers. Then you have a tail section that makes a MotoGP bike look bulbous. To make this possible Dues has constructed an entirely new subframe, built exclusively from chro-moly steel. The tail section is unique by design, giving the MV a look that will not be soon forgotten. Once you enter the cockpit you’ll find a drastically reshaped gas tank, and a gauge built by Scitsu.

Speaking of that hand formed tank, really take a second and soak it in. Forming an all aluminum tank is no easy task, and yet Dues has become some of the best in the world at it. But even this one was originally too difficult for Woolies master skill level. After scrapping his first design Woolie got hard at work building the second tank, the one you see here now. Woolie had to break the tank into several separate pieces to manage its construction, and even that process was trying. Part of the reason this particular tank was so hard to customize comes from the double curve on the top of the tank, something well worth it in Woolies eyes.

The trend continues down the motorcycle with Woolie equipping the MV with a set of aluminum radiator covers for good measure. Then the exhaust hits you. Not only does it sound incredible, but it also serves as an homage to the racing bikes of Giacomo Agostini’s heyday. That’s how this Brutale came to be known as the ‘Ago TT’ a pure tribute to the great racer. The megaphone mufflers are from Cone Engineering as well as tubing from SPD tubing. Woolie then chopped, cut, and welded an all new system in place for the mighty triple. Because this project is commissioned by MV Agusta they reflashed the ECU themselves to match the new go fast goodies.

Because this bike will never see the rigors of street use Woolie had Pirelli racing slicks fitted for maximum grip on the track. Once the tires were installed it was time to think about a suspension upgrade. The Marzocchi 43mm forks up front come standard on the Brutale RR, and frankly are some of the best on the market. Woolie made a smart move by not replacing them. The same can not be said for out back. Sure the stock rear shock is a decent unit, but Woolie saw the opportunity to improve on its design. With new geometry from the custom subframe, the ‘Ago TT’ required a custom rear shock. Öhlins was happy to supply a one-off custom rear shock for the ‘Ago TT,’ something the company rarely does.

Once you factor in the upgraded brakes, controls and rear-sets you have a bike that lives up to its racing heritage. Woolie had nothing but glowing remarks for how the ‘Ago TT’ handled on track, saying, “It feels like a Grand Prix bike, laser-straight and very responsive,” says Woolie “While testing it on the track, I didn’t want to go back to the pits.” Coming from someone who attends the track on a regular basis, that is one hell of a compliment. 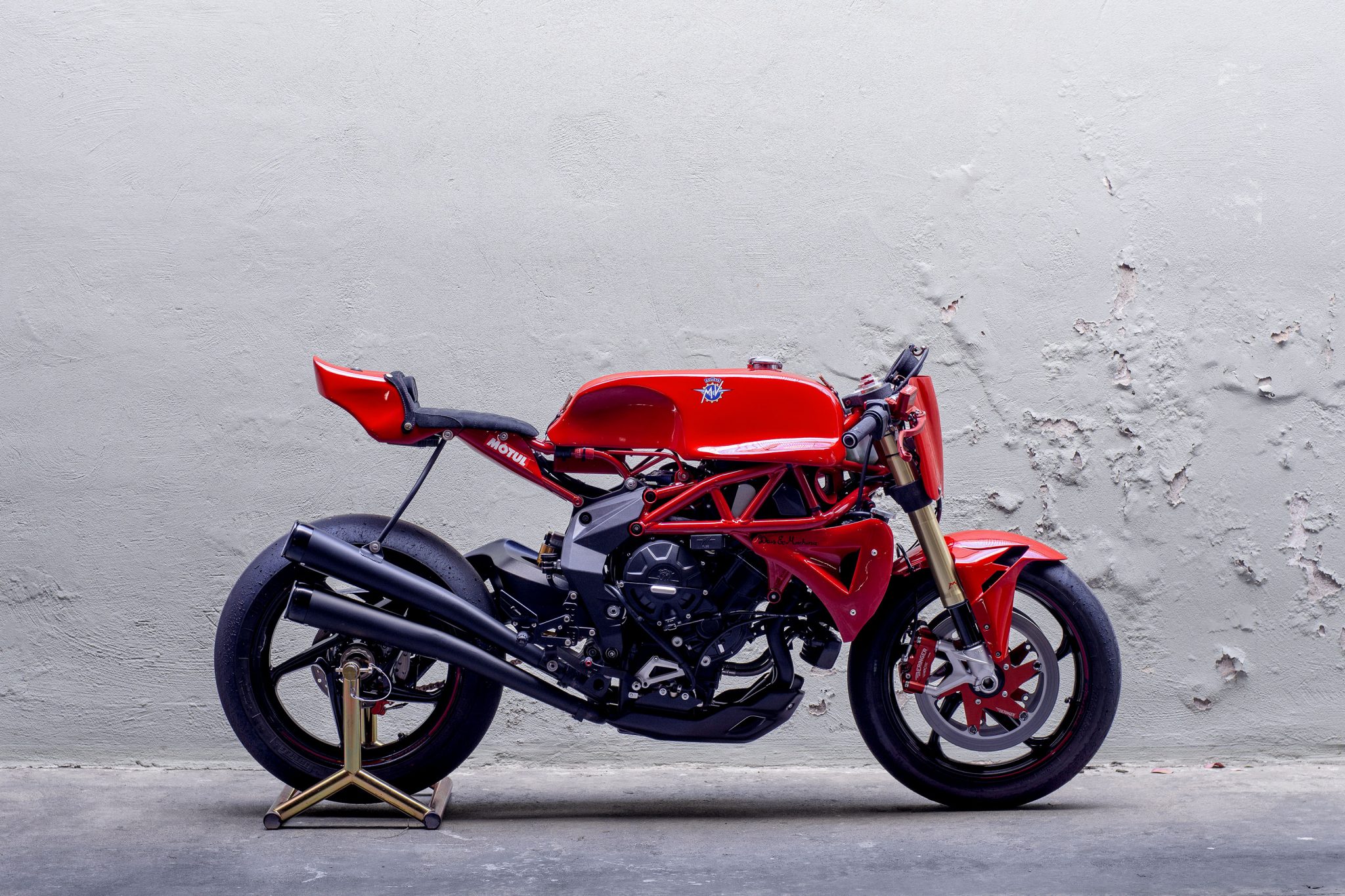 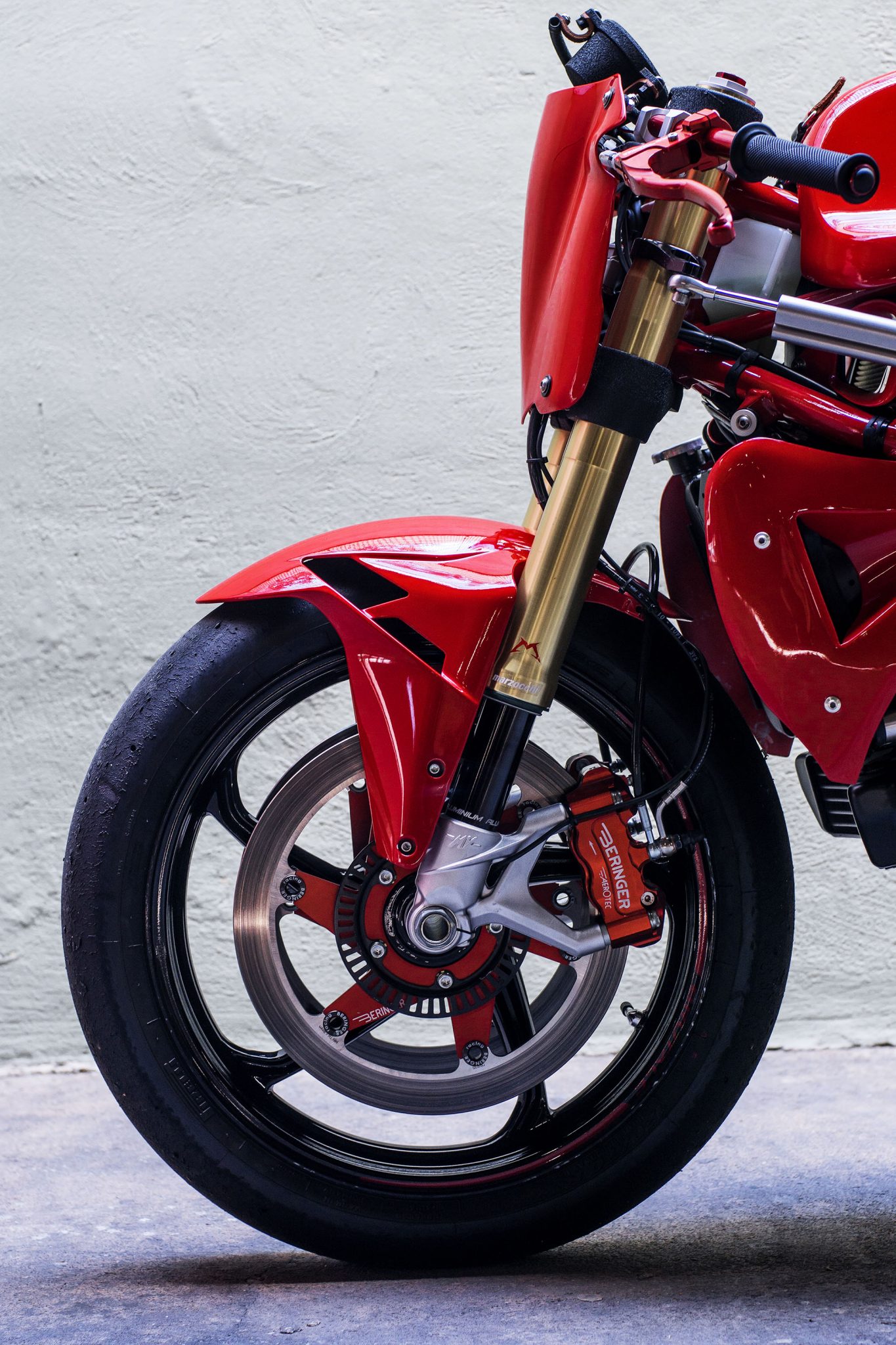 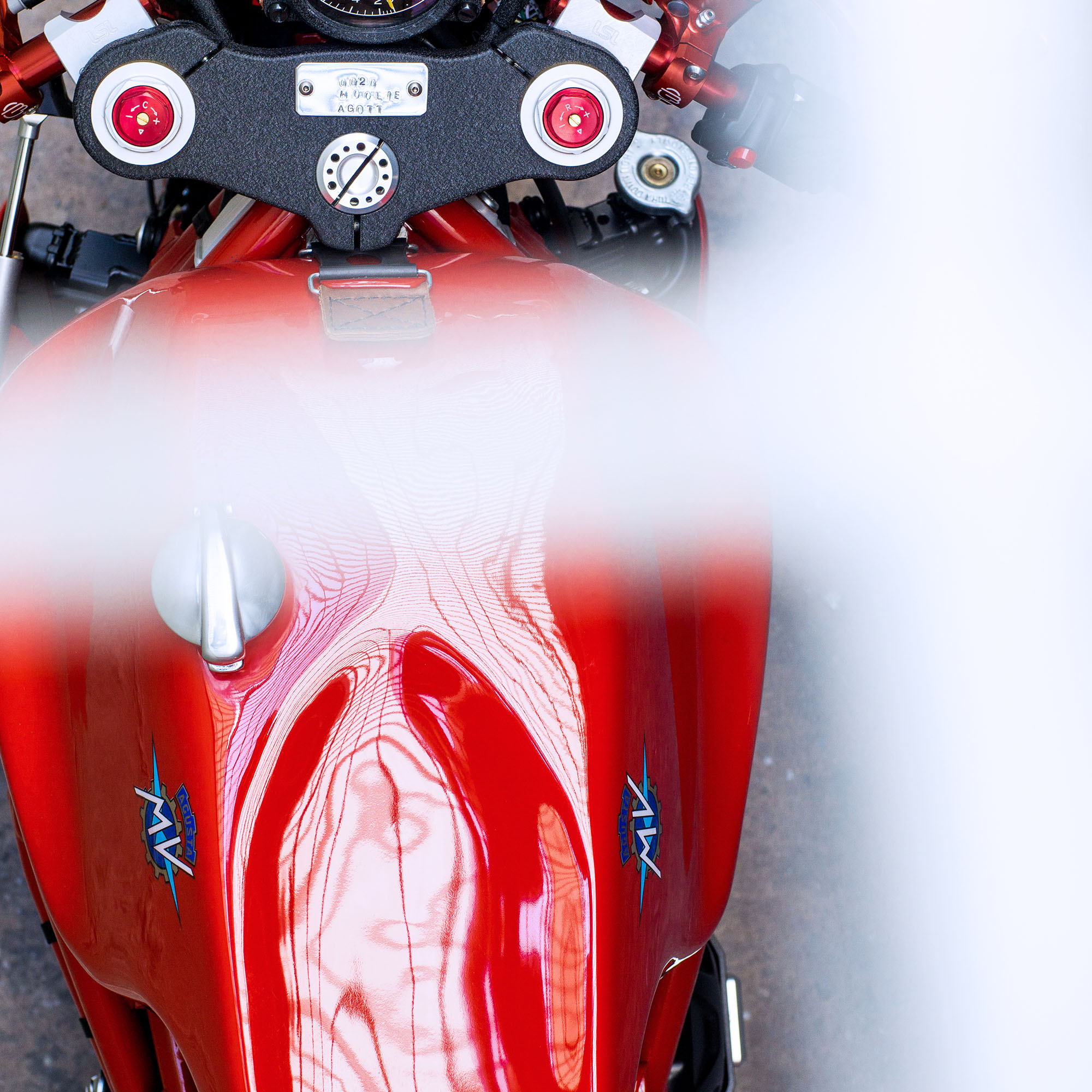 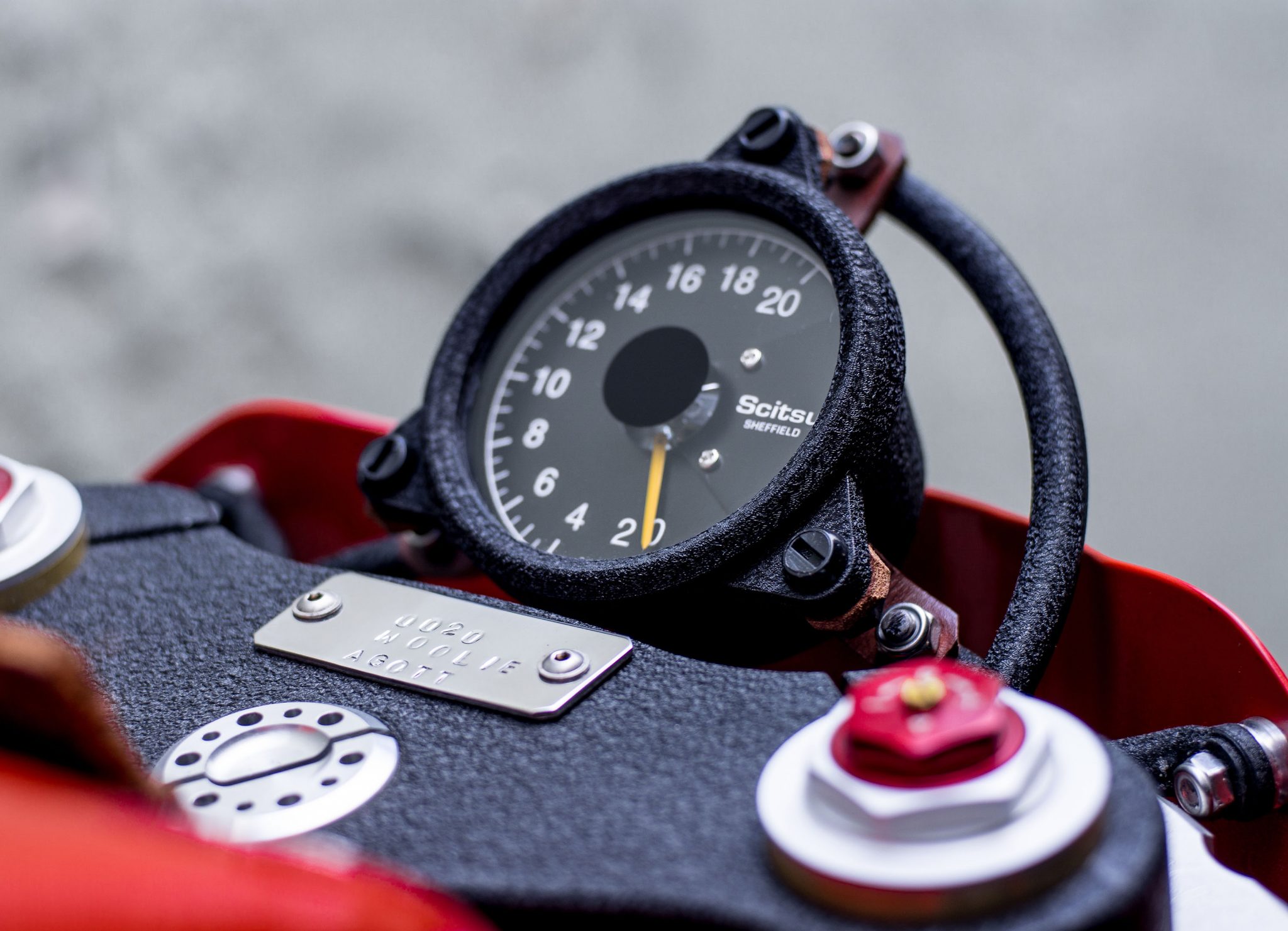 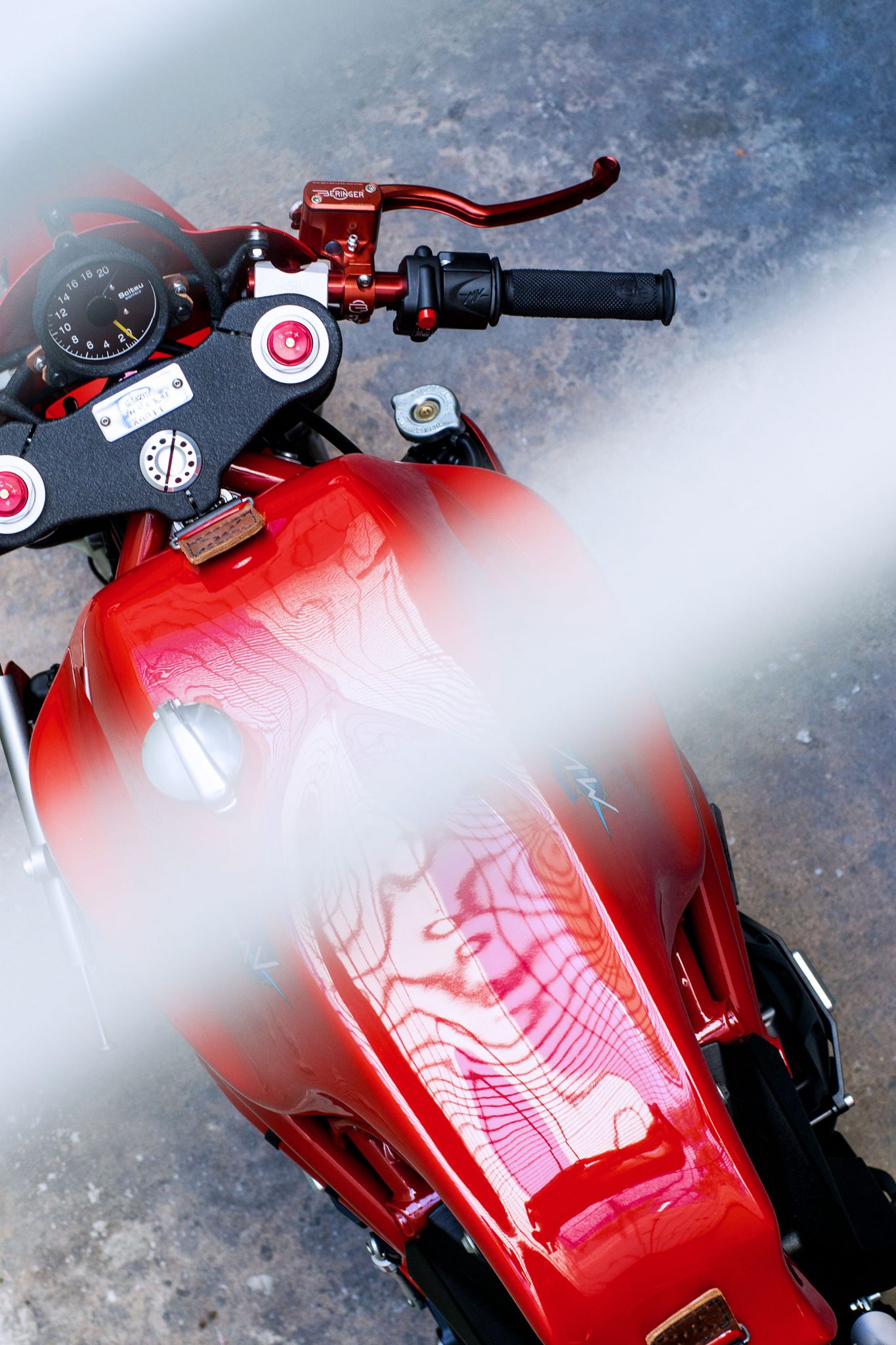 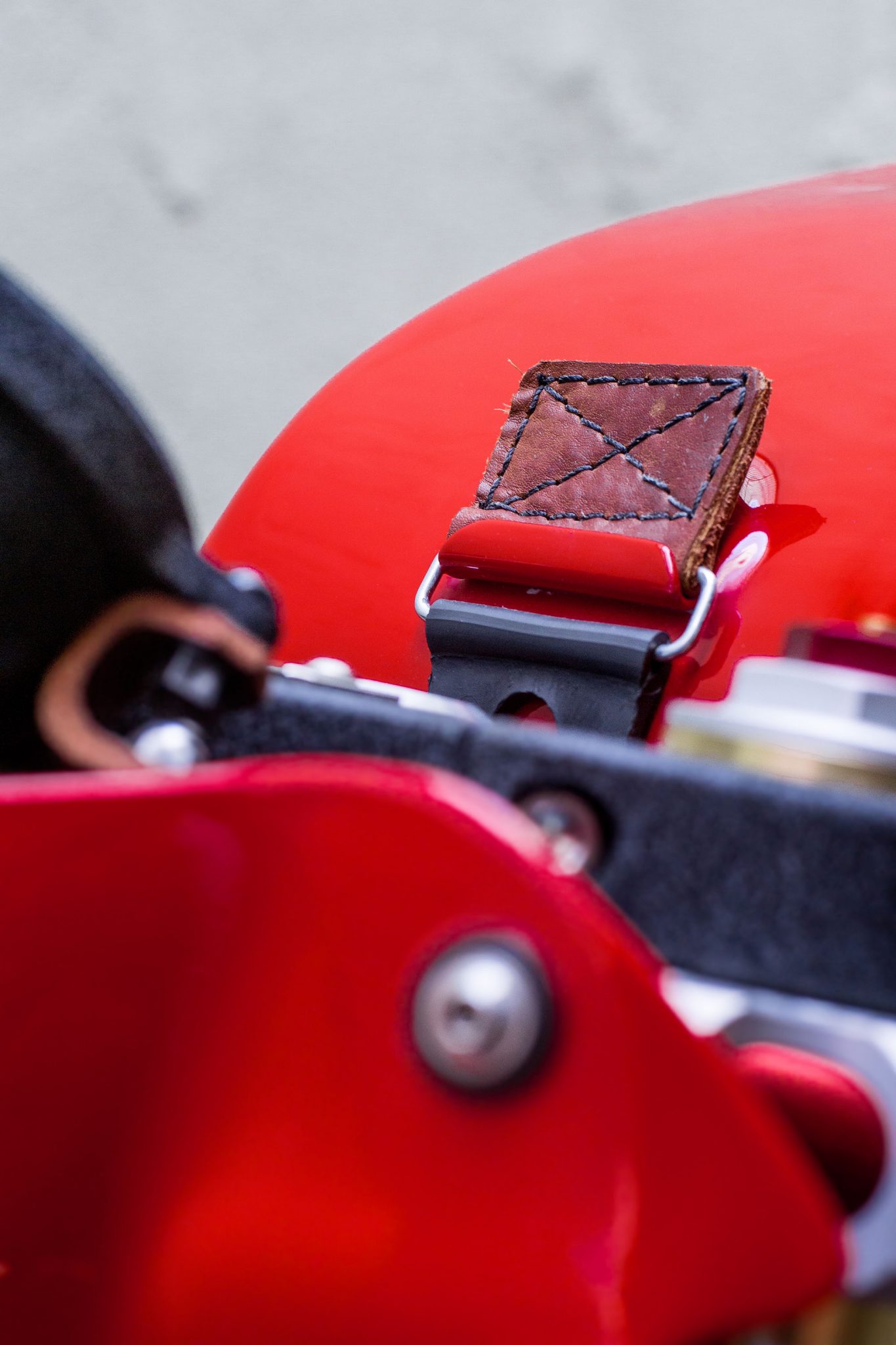 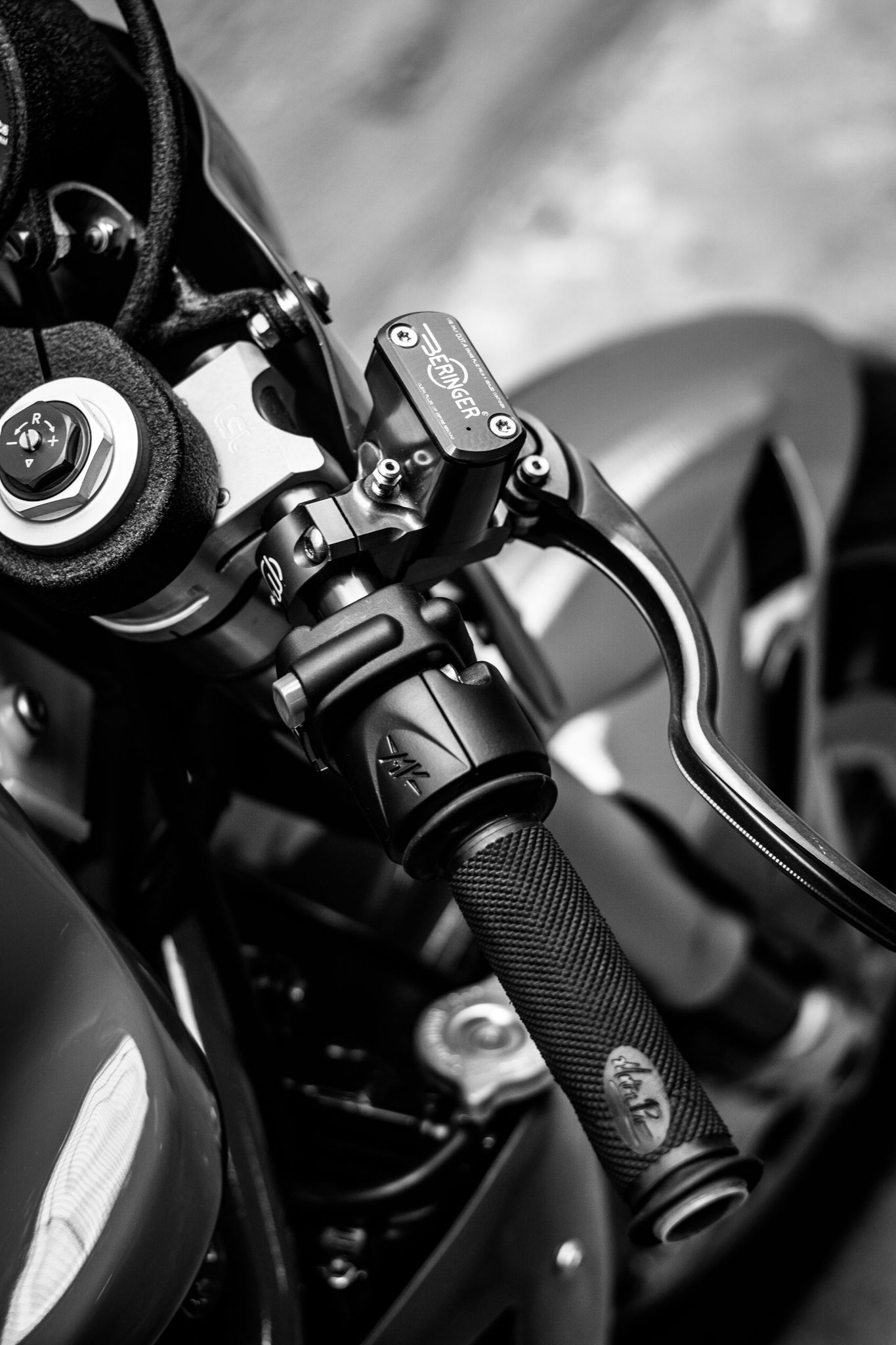 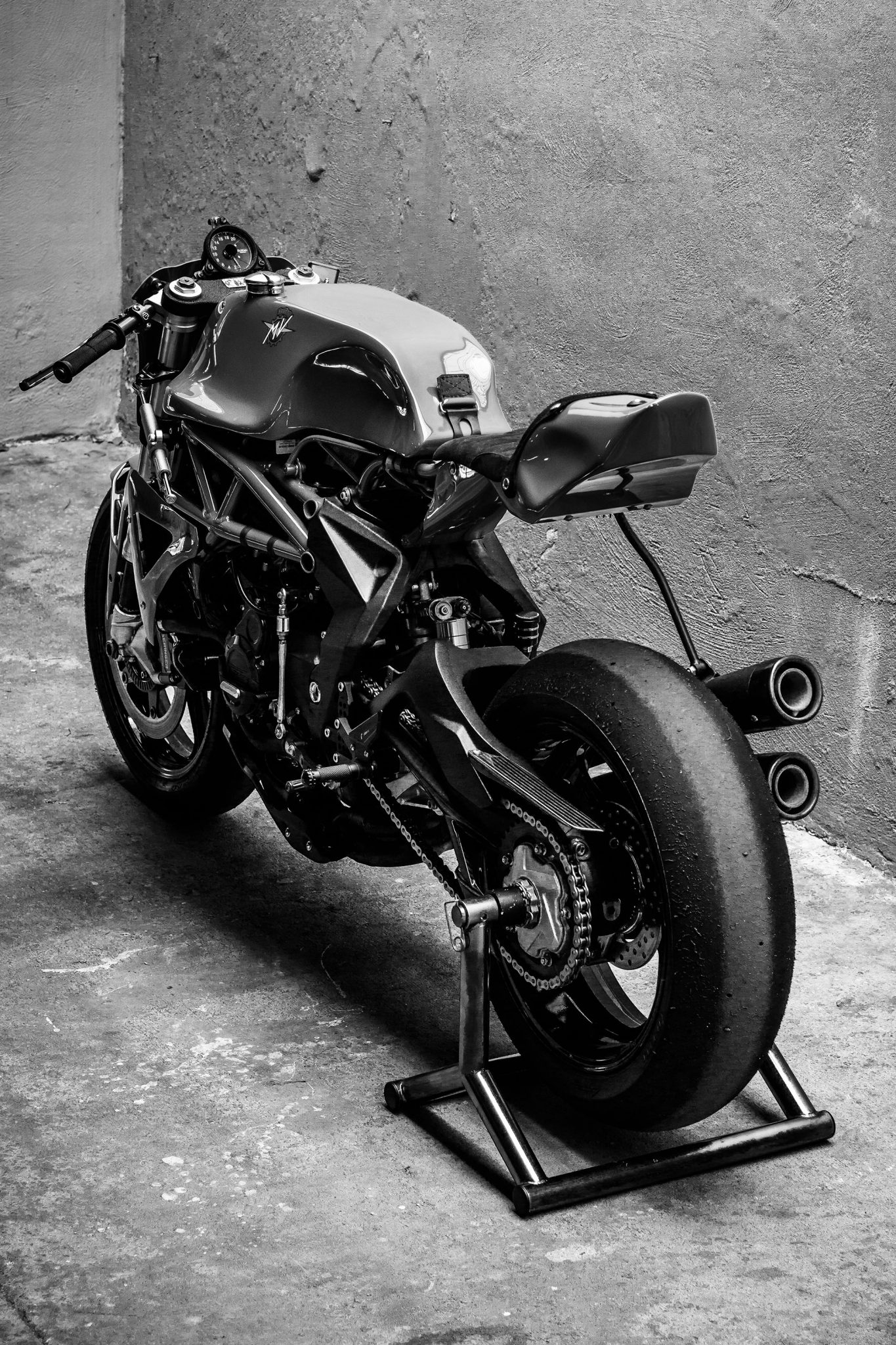 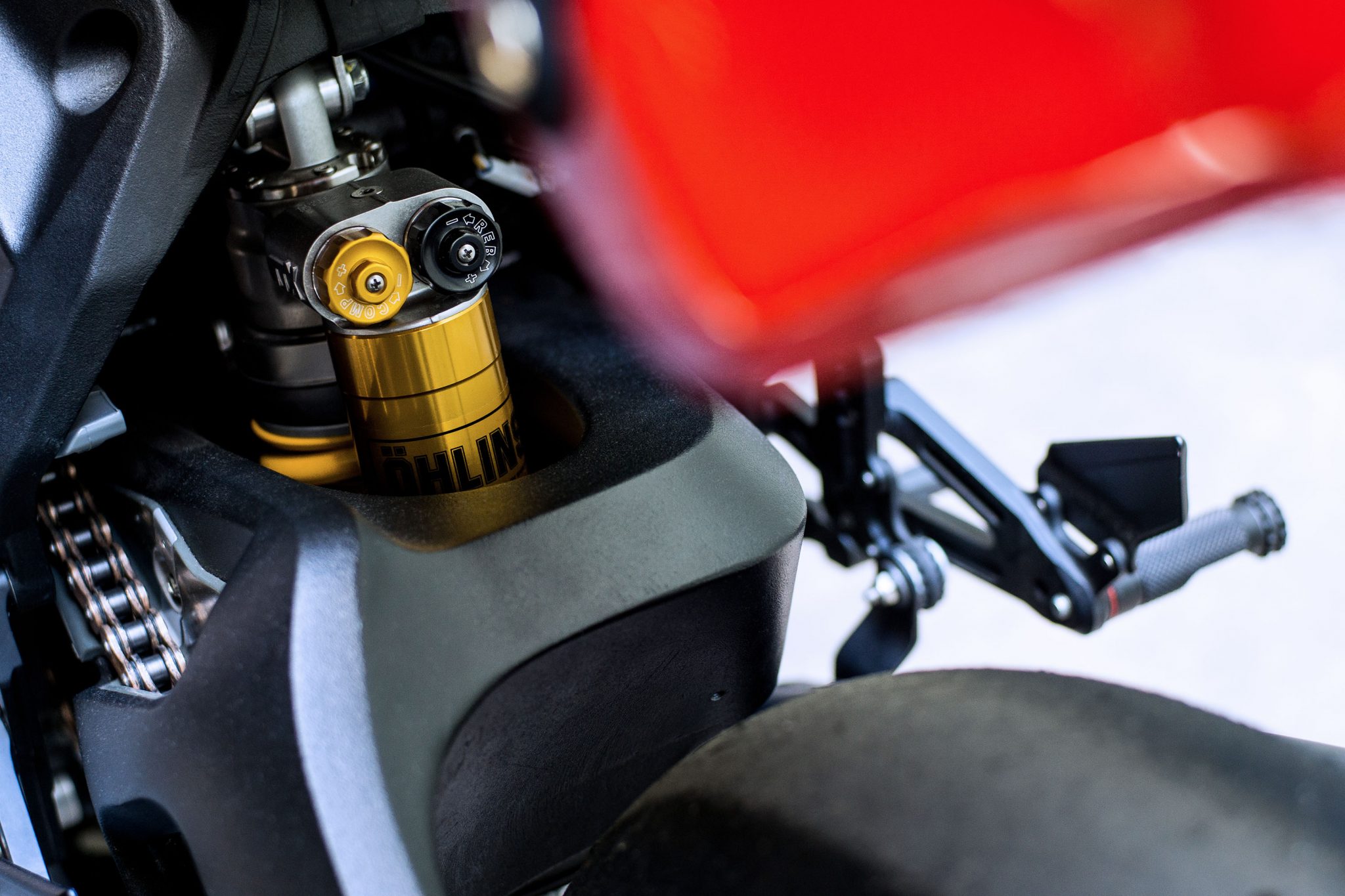 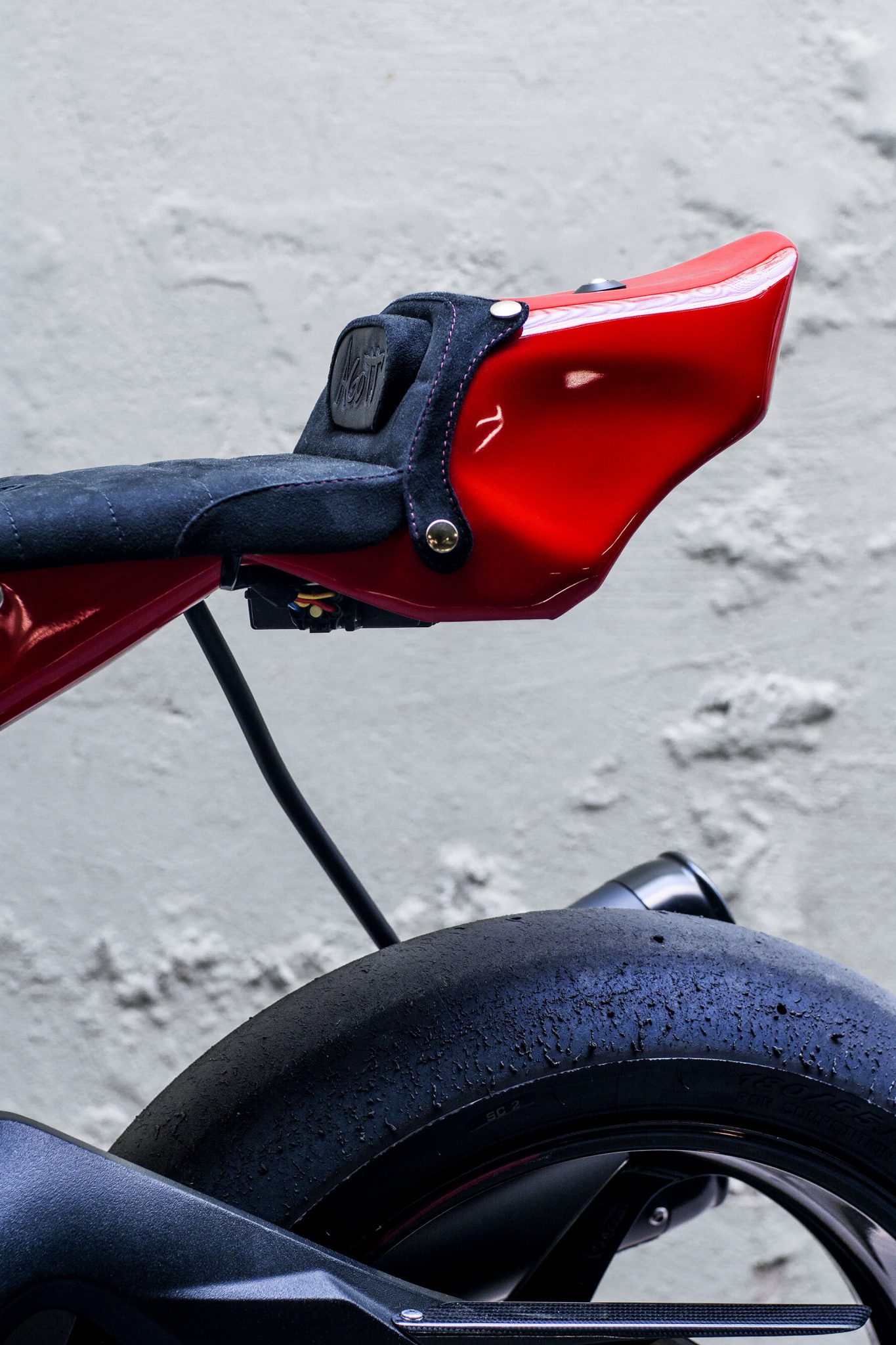 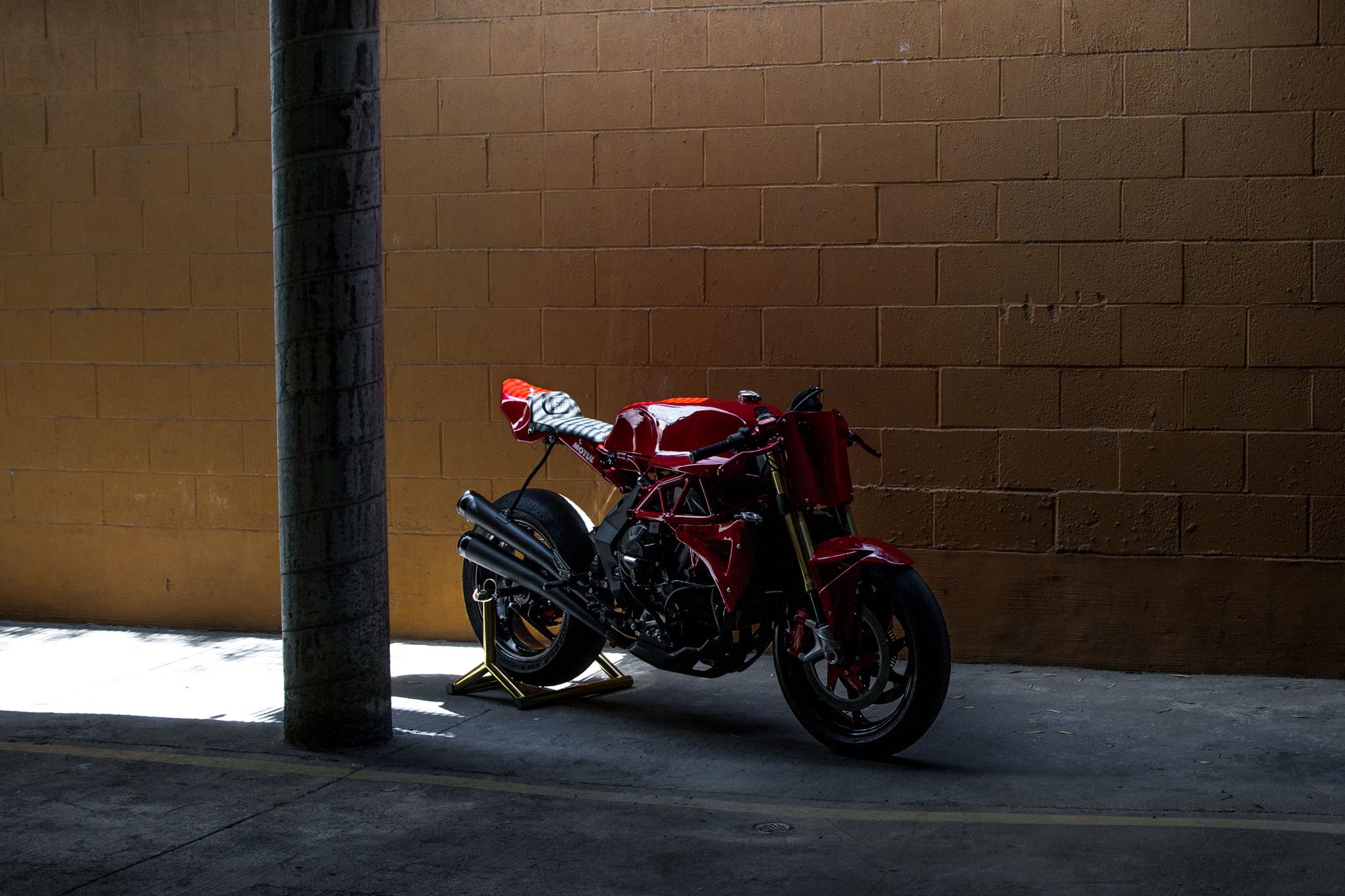 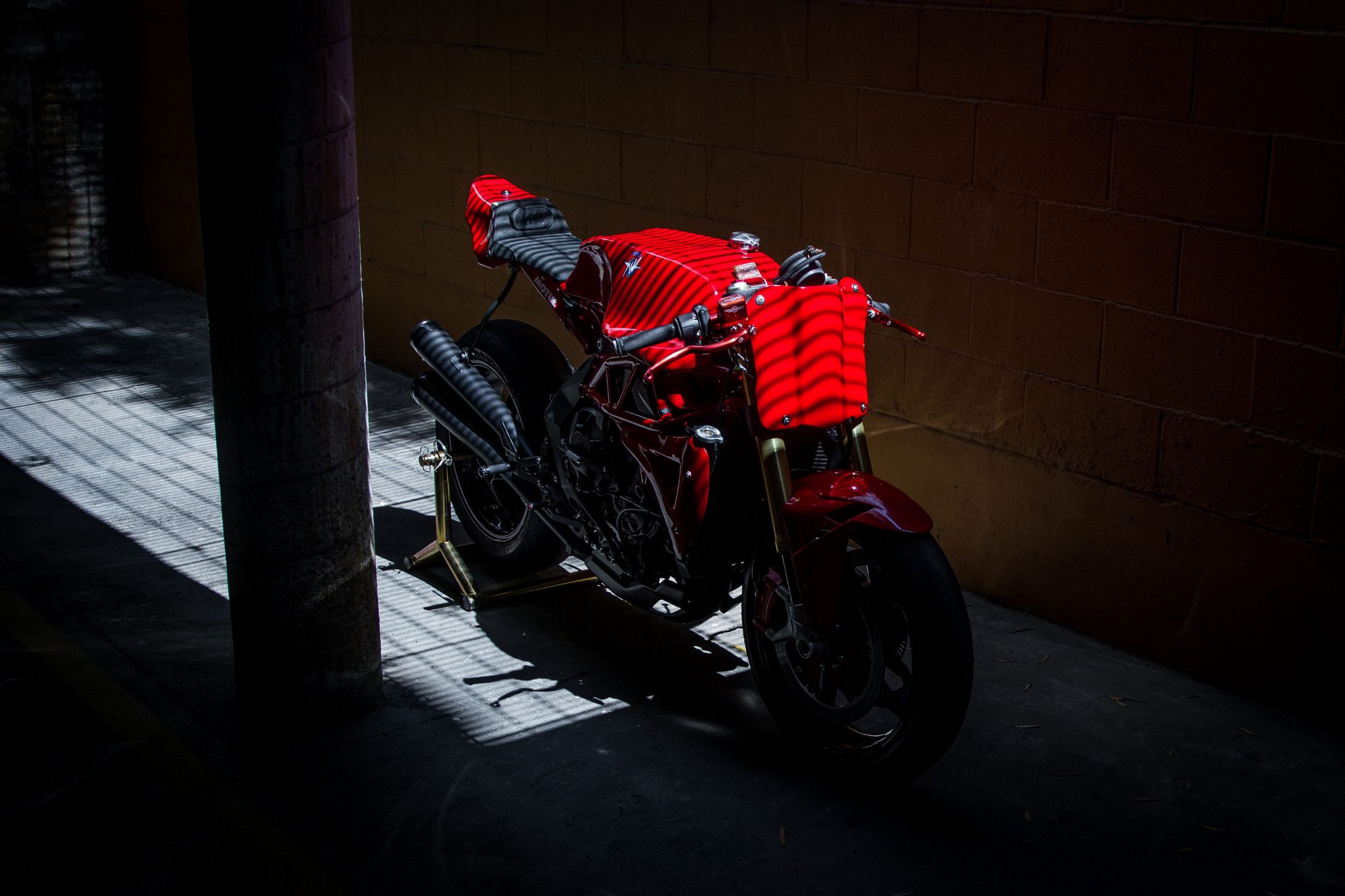 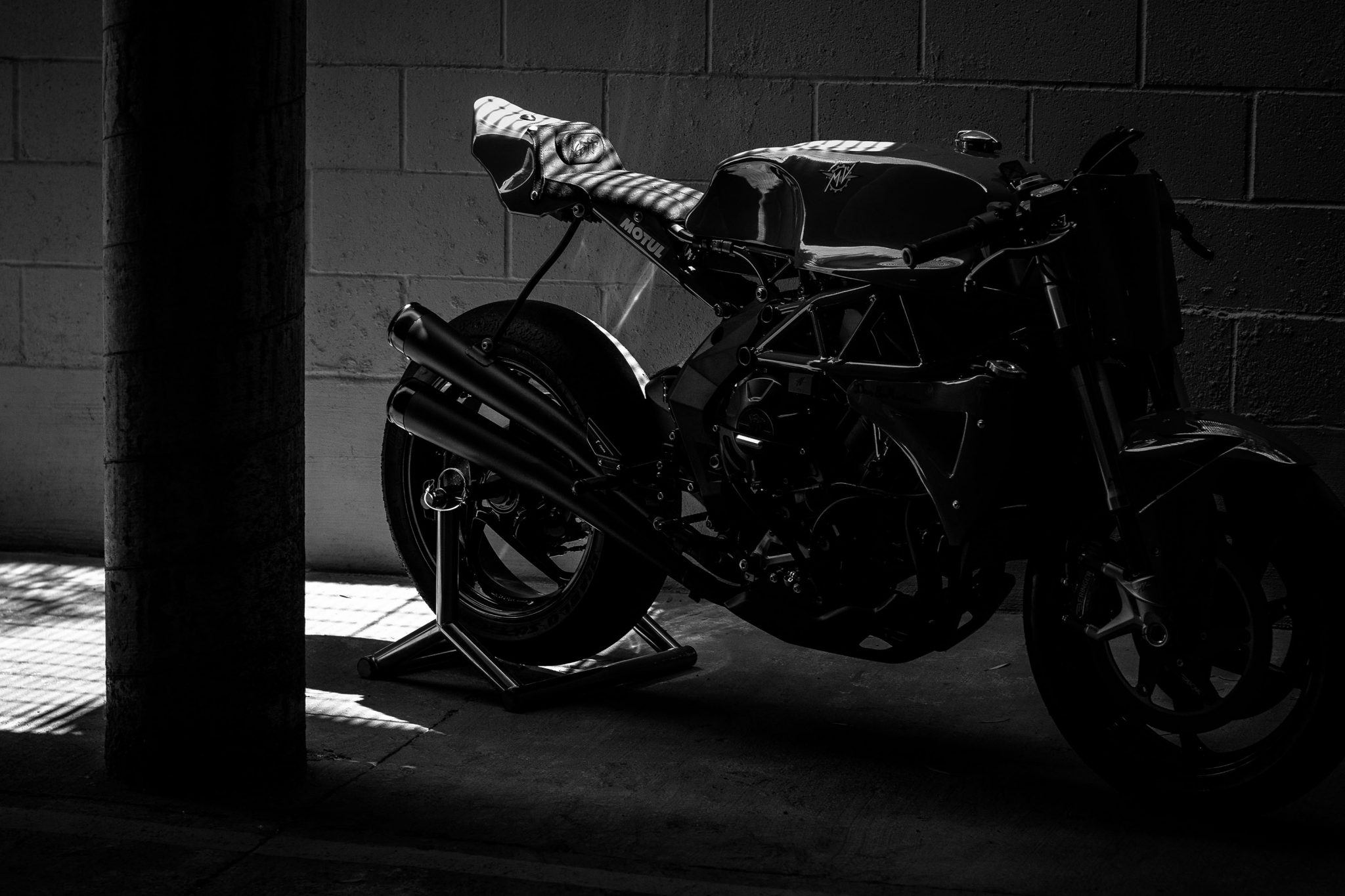