Snowmobiling is one of the greater joys in life. If you’ve been then you know exactly what I’m talking about, and if you haven’t been please listen to me and go find someone with experience to take you. I’ve been snowmobiling over 25 years of my life and let me tell you, yesterday I experienced a first. I rode a brand new sled of the same model year. That sled happens to be the all-new 2016 Polaris 800 Pro-RMK 800 with a 155″ track and the new patented raised AXYS RMK Chassis and let me tell you, it’s gonna be very difficult to find the words to describe how amazing that sled is. 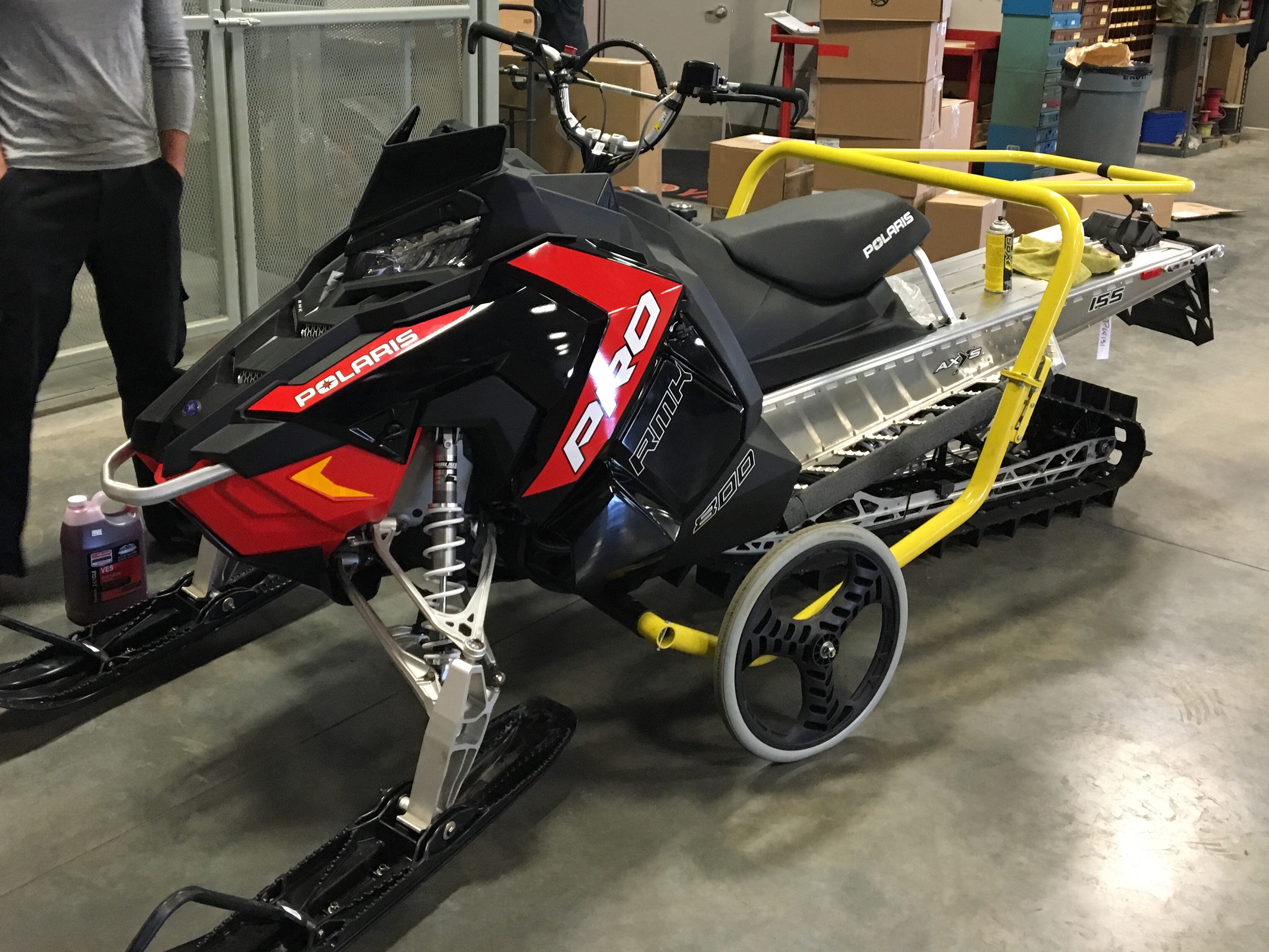 Within the first 30 seconds of riding it, I immediately knew why it had received mountain sled of the year accolades from multiple snowmobile publications and why people have said things like ” this new AXYS platform will change snowmobiling”. The way this thing got up on top of the snow in almost any situation was literally mind blowing. I remember the first time I grabbed a handful of throttle, it kinda scared me a little bit, but the good kind of scared. The ferocity of that power when the Low Inertia Quick Drive kicks in is like nothing you’ve ever experienced on the snow. Normally when you ride a snowmobile it takes a second to get the clutch drive system to kick in before you start to move but on this sled its like your moving before you can even pull the throttle all the way. It was intimidating at first but after 5 minutes riding it you become so comfortable it’s almost like you’ve been riding it for years. This sled literally makes you a better rider within the first 30 minutes of riding it. There were multiple times that I was in a situation where I would’ve needed to turn back down the hill on previous sleds, but all I needed to do was give it a little more throttle, that I seemed to always have, and that track just sunk down in the snow and somehow found traction and just kept going up the hill like it was no big deal. 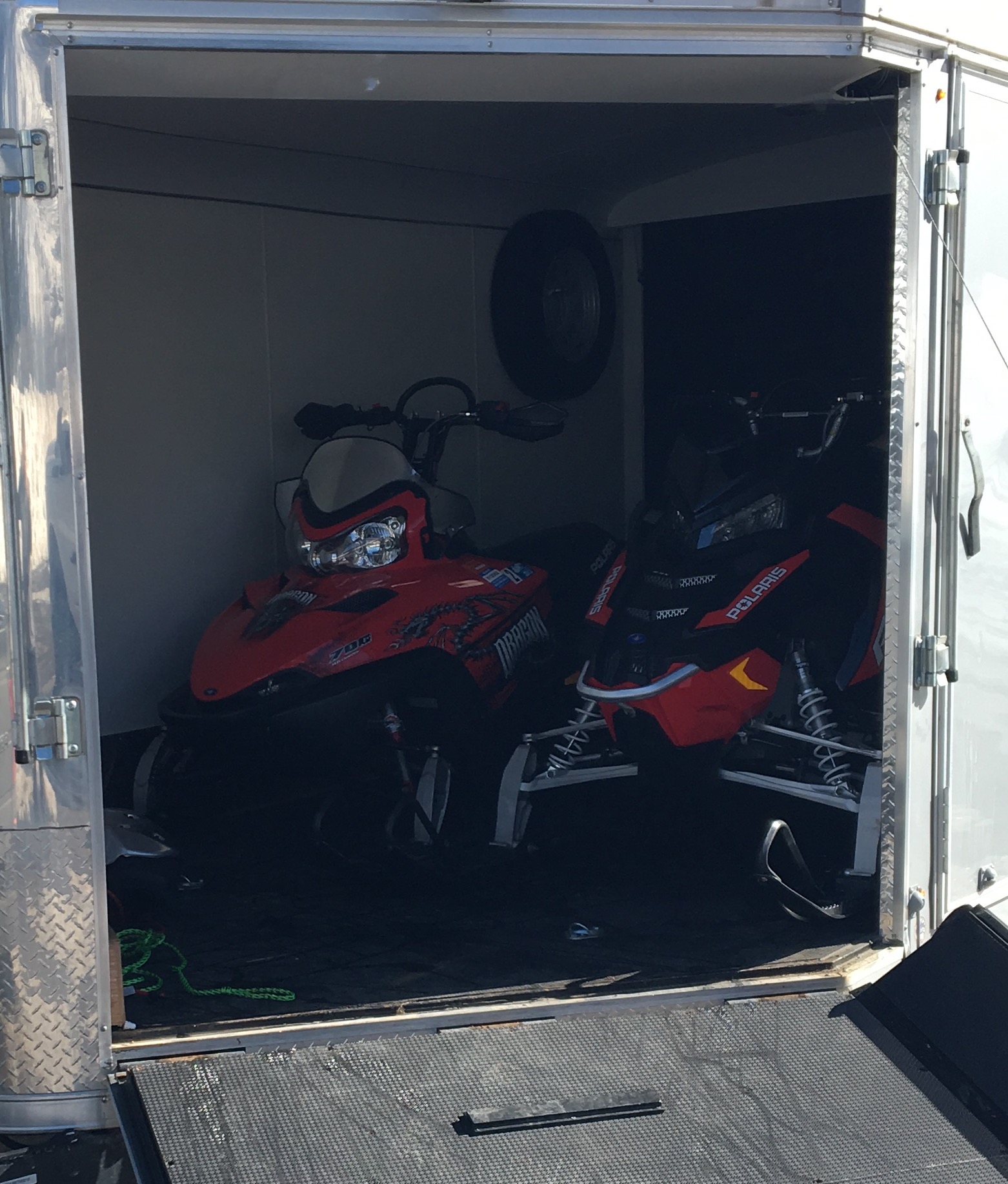 Now as much as I wish it was, this beautiful sled is not mine. But that’s not important. What is important though is that the owner of the sled has only been riding a couple years, yet after a few hours on his brand new 800 Pro-RMK this guy looked like a regular Chris Burandt out there. It was amazing how quickly he had the confidence to throw this thing around and climb hills that I’m not sure he would have even attempted to climb on his old sled, which is no slouch in a 2009 Polaris 800 Dragon RMK. One hill in particular was like a 2 part hill where you had to go up half at one angle and then flip it over to the other side to get up the second half. Now with 25 years riding experience I was scouting that line trying to figure out how I wanted to hit but before I could do anything this guy on his new sled goes flying up the hill like he was born on the thing.

This particular example of the Pro-RMK had been piped and had a skid plate put on the underbelly but other than that it was bone stock. Now considering that the stock Pro weighed in at just 408lbs and has an estimated 165-170Hp and the pipe that he put on it was said to reduce the weight by 14lbs and add 9Hp. So what you’re left with is 175-180Hp with only 394lbs to carry which in the game of power to weight ratio is amazing. How about almost double what it is on the Bugatti Veyron SS (Veryon 0.297 hp per 1 lb, pro RMK 0.444 hp per 1 lb @ just 175hp).

Bottom line: The 2016 Polaris 800 Pro-RMK is the lightest mountain sled in the industry, it has the most advanced “uplifting” chassis ever created, and has a rocket ship for an engine that seems to have an endless power band with torque available at any RPM range.

It changed my life! It was absolutely, positively, the best sled I’ve ever ridden and I can’t wait until I can buy my own. Until then, I will keep you informed as to how amazing this particular sled is. The next time out we should finish the “break in” period and then we’ll really be able to open her up. Oh did I forget to mention this was only the break-in day we really haven’t put her through the paces yet. Damn whats that gonna be like? I sure cant wait to find out.