More often than not when something is ‘shed built’ it’s either a very mildly modified production motorcycle, usually just incorporating purchased parts configured just the right way, or it’s a full custom and the shed in question is actually a fully functional garage run by a staff for that very purpose. But just like his build, nothing is typical about this Northern English man. Not much is known about the builder of the Brute, other than his name is Shaun and his hobby is building motorcycles in a shed less than 400 square feet in size. And the results are nothing less than remarkable. 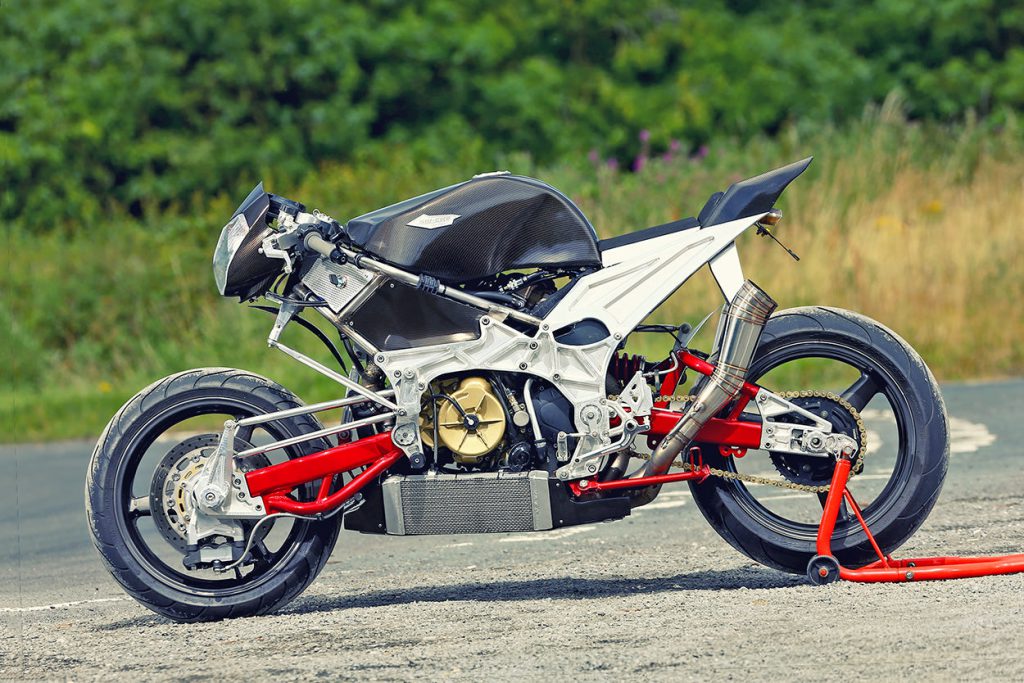 I believe Shaun is the type of person that prefers the road less traveled. Actually, after seeing this build I am starting to think if Shaun had the option of the road less traveled or no road at all, he would choose the latter. The reason I say that is because Shaun didn’t just ‘build’ a motorcycle with parts specifically designed for something he had laying around, something most builders do. No, Shaun built almost the entire bike from the ground up, manufacturing majority of the parts in his own shed, with his own hands and tools. Tools he built or restored himself mind you.

His motivation was simple, he had never ridden a hub-steered bike and because of their rarity, he couldn’t get one to try out. So as he put it, “I’d read quite a bit about them, and wanted to see for myself what it was all about… and I like making stuff.” Well, okay then. And his timeline? 3 years or so; with an 18 month lay off so he could move. That is absolutely astounding.

So the Brute is special, but how special is it? The answer is extremely. The Brute is built around a second generation Aprilia RSV1000R engine, one that has been heavily reworked. It has a first generation wiring harness, allowing for better tuning. It also has Yamaha R1 wheels with custom hubs. Other than that and a few minor parts dashed in here and there everything else has been built by Shaun himself. His mantra, “make as many of the parts as I can myself. If I can’t make it, then redesign it or make a tool so I can.”

All of this made for a truly incredible final product. Hub steering bikes in themselves are fairly rare, but none are built in anything less than a professional facility that is run by a team of engineers that get paid to make things work. The Brute is on another level for something designed by an Englishman on a whim. 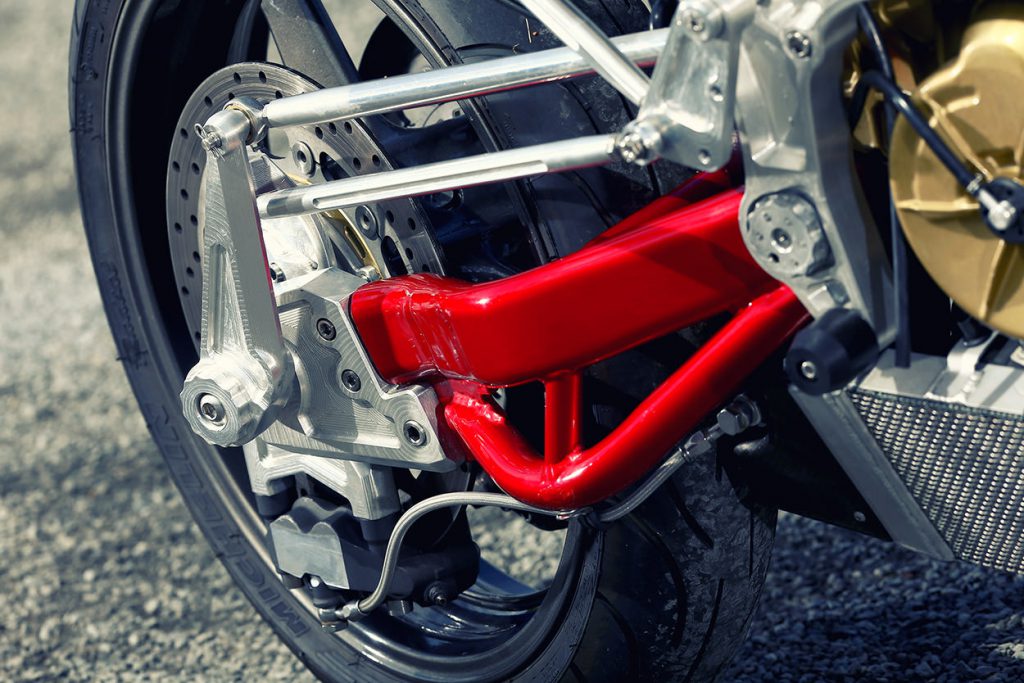 The attention to detail is what makes it stand out the most. The frame is constructed from a combination of 6082 T6 aluminum for the main frame and a superalloy called Inconel for the top tube, allowing Shaun to modify it without worrying about paint.

The swingarms are made from oval t45 tubing, with billet 7075 axle boxes at the ends. He even made 3 different axle box setups that change the overall wheelbase and weight distribution; a distinct way to change the bikes handling characteristics. Although they weren’t built by Shaun himself the shocks are a one-off custom set built specifically for the Brute by Mike Capon of M Shocks. The brakes are Brembo units upgraded from the original R1’s Tokico setup, a nice upgrade overshadowed by the rest of the build. 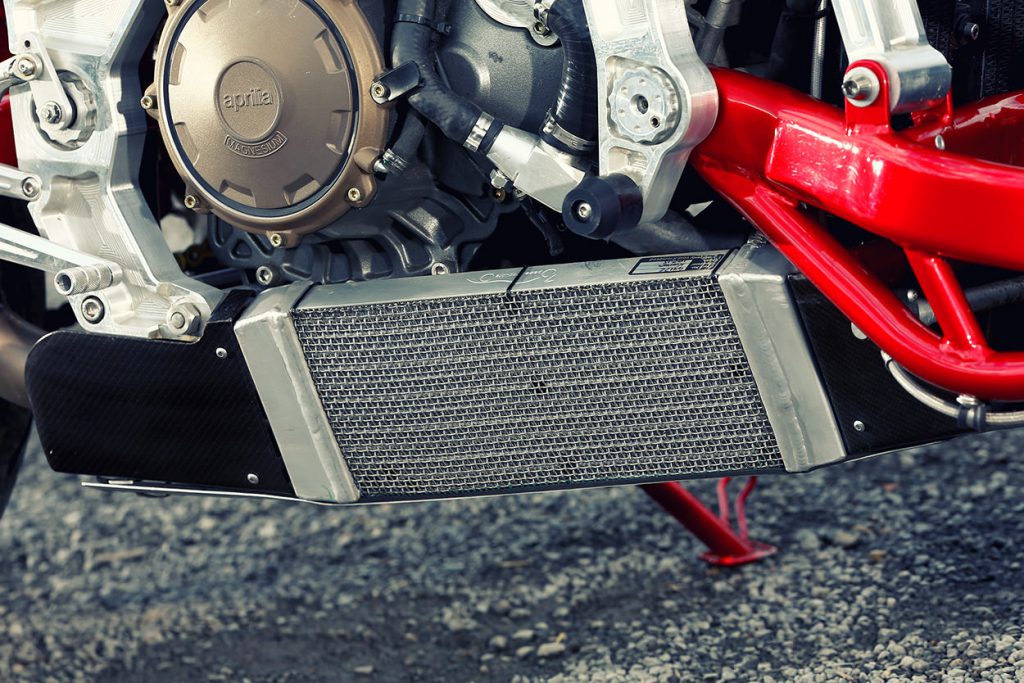 By far one of my favorite features is the custom cooling system that was built to keep the 998cc v-twin in check. Pace Performance supplied the radiator cores, while everything else including the water pump housing was hand fabricated then tucked under each side of the bike by Shaun. Combined with the raw welded exhaust it gives the brute an exceptionally mean look, letting you know it’s ready to perform as well as it looks.

However, the true test is how the Brute rides. With a weight of 393 pounds and an undisclosed horsepower rating north of 139hp(stock RSV hp), the Brute shapes up to be one great riding motorcycle. Performance Bikes tested the Brute last year and had glowing reviews, stating ‘It’s the best special we’ve ever tested.’ Shaun even seems to be impressed with his creation’s ride quality, claiming his test ride turned from a toe down excursion to a 12-mile ride on main roads. That’s always a great sign for a shakedown run.

So can the mystery man from England do any wrong? Well if I had to nitpick anything it would have to be the bodywork. It is all fabricated out of aluminum, with a faux carbon finish. The brute also sports a naked look, with just a universal headlight unit out front. I would love to see Shaun either collaborate with someone or build his own carbon bodywork, utilizing a 3/4 fairing of some sorts. But that’s just my personal taste.

Overall the Brute is still a stunning piece of work, eclipsed only by its own origin. Shed builds don’t get any better than this. Good work Shaun, keep it up.