The bike that started it all, the CB750. Back in 1969 the first CB750 hit the streets, changing the course of motorcycling history from then on. We can easily trace modern day motorcycle lineage back to this single design, making it one of the most famous motorcycles in the world. Sounds like the perfect recipe for a restomod to me.

Before ’69 the motorcycling market was dominated exclusively by twins. While inline engines were being used in racing, their cost of production kept them out of the world market. But then Honda came along. With a new approach to R&D, and a massively efficient assembly line, Honda was able to do what no one else could. Their inline-4 took everyone by surprise for a slew of reasons. One of the biggest being the fact that it was so affordable. There was no real downside to the CB750 and the resulting sales reflected that fact.

The original 750cc engine was a single overhead-cam design with two valves per cylinder. Honda’s racing bikes were light years ahead of this famed CB when it came to technology, yet even still the CB wowed with its overall performance. Even some 48 years later the original single-cam CB engines are still well sought after. While part of that is because of their legend status, the other part is due to character, and that engine had loads of it.

A single-cam CB750 might possibly make the best noise to ever come from a motorcycle. If you have heard a properly tuned one you know exactly what I am talking about. From there the CB750 is a visual specimen. Bone stock they look incredible, no doubt inspiring the current generation of retro machines. It’s one of the few machines that holds all the keys to perfection straight from the factory. It has become a staple for every shop worth their salt to build some type of cafe racer, bobber, tracker or hybrid from the grandad of motorcycling. But Rawhide Cycles saw the opportunity for a new approach, and that is where Sweet Jane comes into picture.

Sweet Jane was the bi-product of a separate CB build that Rawhide Cycles had produced last year. Sweet Jane’s owners name is Tom, and he lives a fair 800 miles from Rawhides headquarters in Nampa, Idaho. Although they could have been on separate sides of the globe, Tom didn’t care. He wanted a Rawhide Cycles build. Tom actually called to purchase Rawhides ‘Golden Goose’ build, but came up just a little late. From there Tom and Rawhide Cycles started talking, eventually deciding on what would become ‘Sweet Jane.’

Starting life as a 1975 CB750, ‘Sweet Jane’ was built with an image in mind. “Everything on the bike was intended to be period correct in appearance. We wanted to build a CB750 restomod that could potentially have existed in 1975.” To manage that Rawhide had the bike taken down to the frame, rebuilding everything in the process of the build. And I mean everything. Every washer and bolt has either been replaced or re-finished.’Sweet Jane’ now has the appearance that it just rolled off the showroom floor in 1975. Many of the parts used are period correct from other Honda models, with a dash of custom bits in there for taste.

Visually ‘Sweet Jane’ looks quite a bit different than a standard CB, but it’s almost hard to distinguish why. A combination of small changes have made a massive impact to the entire package. Most notable of which is the smaller gas thank. No, it isn’t hand formed. It’s a unit from a CB200, available in 1975. That’s how good Japanese styling was back then. The tank took minor modifications to fit onto the new, larger frame. To keep with the trend Rawhide kept the stock CB750 side panels, with a little tweaking of course. Then came the headlight. Donated from a ’67 Honda CL77, the headlight serves as your driving torch while also housing the speedo. Two birds, meet this one stone. Other notable donations came when a CB400F gave up some handlebars, while all the controls came off a ’65 Superhawk. From there we are finally able to venture out of the past and into the future.

Rawhide has their finger on the pulse of what is hot and what is not. ‘Sweet Jane’ is the perfect example of that. So they upgraded the things that really matter to a more modern spec. First, came new controls and bar end mirrors. Then a custom built seat, one with extra girth to accommodate Tom’s height. From there Rawhide elected to have the suspension dropped by 1.5-inches. This gave ‘Sweet Jane’ a great stance while retaining the CB’s rideability. The thing is, ‘Sweet Jane’ has a secret. From the outside all you see is a beautiful vintage bike, tastefully modified. But from the inside ‘Sweet Jane’ is set to breathe fire.

While Rawhide had the bike apart for the rebuild they elected to casually throw a big bore kit into the mix. Now sitting at 836cc, the CB has some extra bang for the buck. Paired with a set of WebCam Racing street profile camshafts ‘Sweet Jane’ is hiding an ace up her sleeve. They then proceeded to go through every other part in the engine, bringing everything back to like new condition. Hell, they even rebuilt the transmission. Once complete Rawhide hand bent a set of four-into-four exhaust with baffles built into the tips, a stylish touch to an already perfect bike.

It’s safe to say Tom was a very happy man with how well ‘Sweet Jane’ came out. And best of all, he didn’t have to risk missing out on the purchase. Rawhide Cycles has a way with colors. The ‘Oriental Blue Kandy’ with green micro flakes from House of Kolor is no exception. With the popularity of the CB platform, it’s a wonder it has taken this long for a true restomod to come about. Regardless, ‘Sweet Jane’ was well worth the wait. 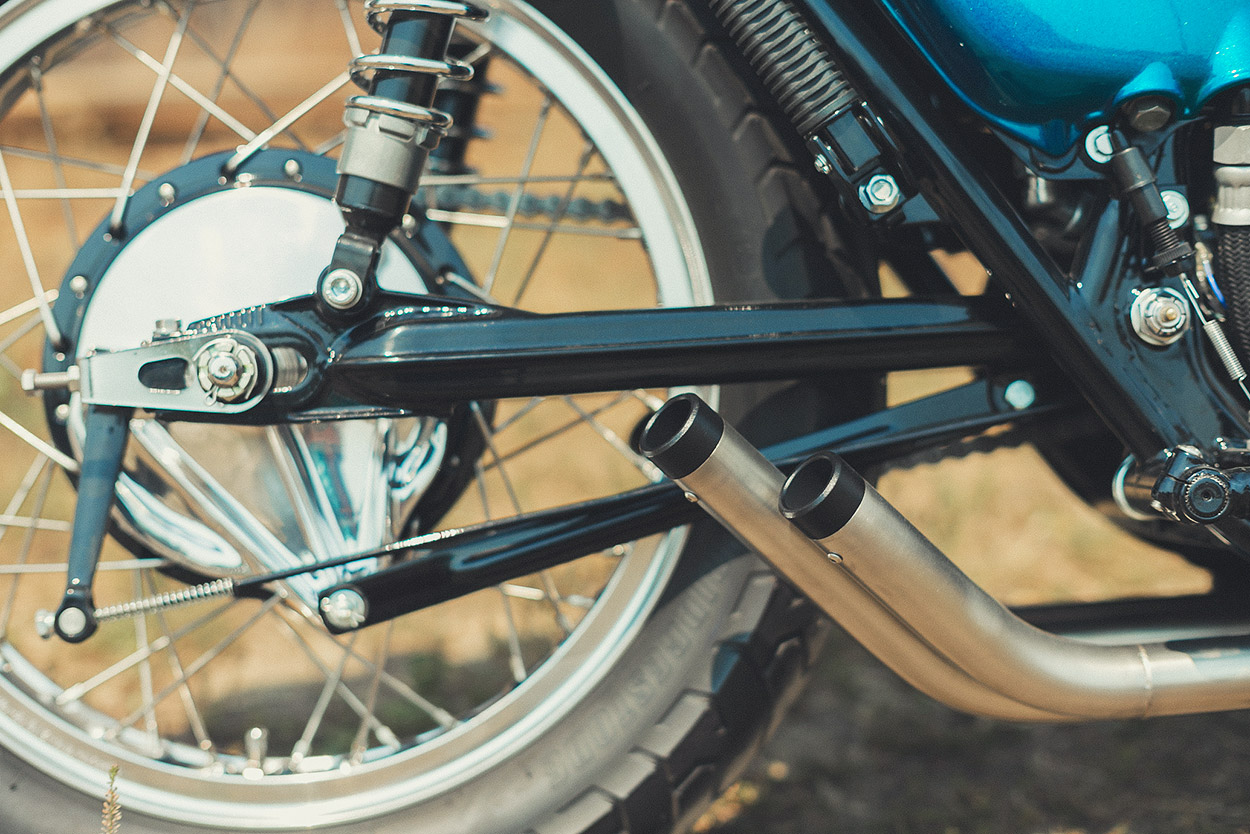 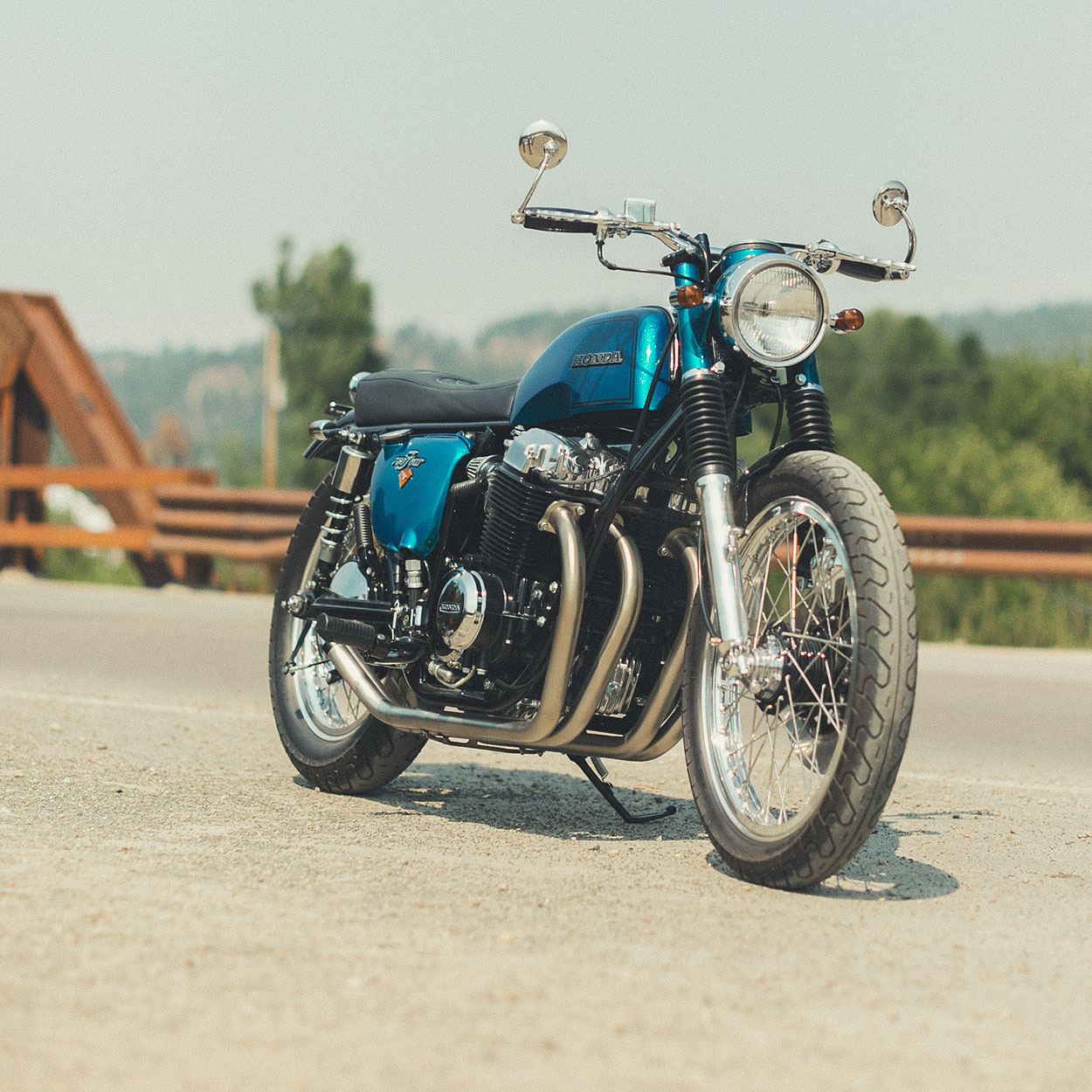 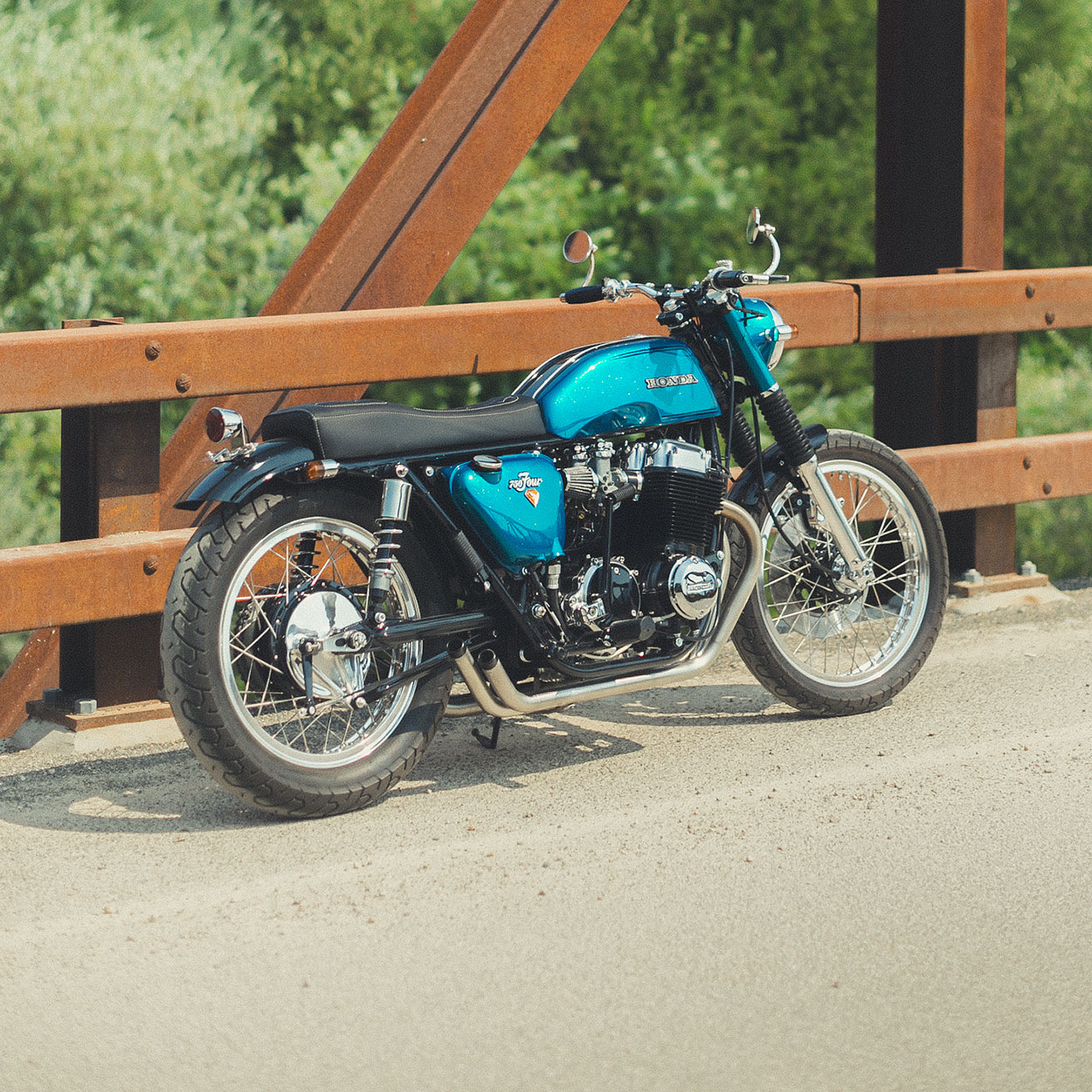