American racing is a beauty of simplicity. You either go left or you go straight. The classic king of American motorcycle racing is easily Flat Track, birthing a subculture of street going trackers. Unfortunately, Harley never got that memo, leaving us without a street-bred steed. Mule Motorcycles is here to right that wrong.

Flat track bikes on the street seems like a terrible idea at first. But then you really start to think about it, and it becomes more apparent why it’s so popular. The upright seating position makes it comfortable, and the chassis and tire setup is designed to handle slick clay, making easy work of any other terrain. It’s a wonder that it hasn’t been exploited by the factories like every other niche custom. Even still Mule Motorcycles has taken a Sportster 1200 from lethargic to superstar with a swift Tracker kick, and we love it.

The 1200cc Sportster engine is, and I hate to admit it, a fairly decent engine. While it is a great joke setup, the 1200cc V-twin makes enough power to be useful, while remaining reliable enough for most any rider. Sure, it’s an overly complicated mess at times, but that is only if it’s not kept up from day one. Mule’s Sporty was sourced with just 240 miles on the clock, making it perfect for this build.

The project was a collaborative effort between shop owner Richard Pollock and a former employee Mel Cary. Mel was at one point in time Richard’s right-hand man. The two have built many bikes together, making this a special collaboration. Mel approached Pollock when he knew what he wanted his next bike to be, a tracker build to conquer them all. While they worked in Mule’s shop, Richard explained his lack of involvement, “Mel did all the work with only some suggestions, experience and spare parts coming from me. After building more than 60 Sportster-based street trackers, I think it’s fair to say that I have a pretty good idea of what works and what doesn’t.”

The first step was ditching the absolutely atrocious stock Sportster suspension. In fact, Mel removed just about everything, leaving the bare bones frame and engine package. From there they equipped a set of forks off a Ducati 996, and a custom set of Penske shocks, ones rarely seen on a motorcycle. “The pair of Penske remote reservoir twin shocks you see are pretty rare on motorcycles. This set was sourced off a formula car from a customer in Switzerland about ten years ago,” says Richard.

The wheels became the next attraction, making the tracker a rolling machine. 19″ Morris HD wheels were widened by Kosman Specialties and then powder coated in a dark bronze. Both the wheels and shocks were sourced by Richard a while back, where they then sat within Mule’s storage, waiting for the perfect project. Richard knew Mel would build a bike that was worthy, letting his parts go to help the cause. With a set of Brembo rotors added, the tracker finally had a rolling chassis. All that was left was the actual aesthetics.

While most builds encompass some type of handcrafted tank and tail section, Mel simply fell in love with a unit from Storz Performance Motorcycle Accessories. And you can’t blame him, the seat and tank match beautifully. However, they did bend their own handlebars for the bike, giving the cockpit a custom feel. From there a Joker headlight bracket gave the tracker some street cred, while Rizoma took cake of the rest of the controls. For performance Mule simply built a custom exhaust, re-jetted the carb and called it a day. The powerplant was fresh, no need to try and fix what isn’t broken.

The project was finalized with paint from David Tovar at Superbike Paint in San Diego. The rich black makes for a beautiful contrast with the dark bronze wheels, as well as the all the polished bits. This isn’t the first Ducati front end I’ve seen on a Harley-Davidson, but I’m starting to think this is the only way to go. Mule’s tracker is a beautiful example of what a street tracker should look like, it’s just a shame it won’t be up for sale. Harley-Davidson take note, this is the bike you should be making instead of another Softail. 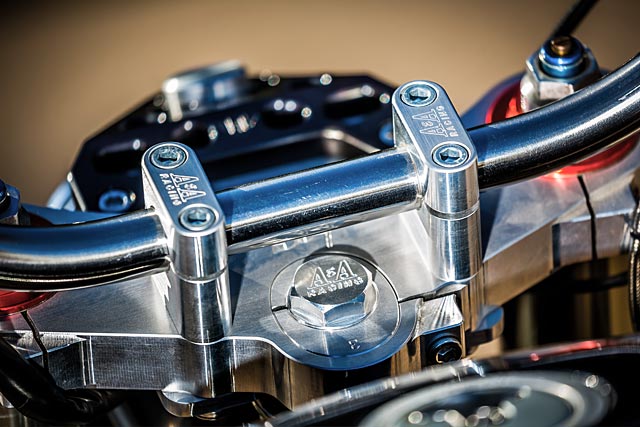 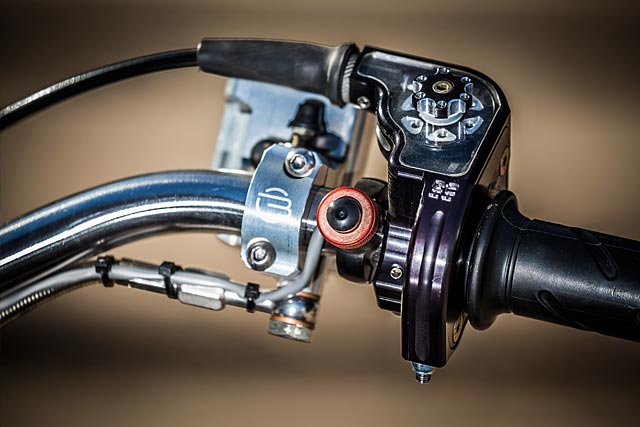 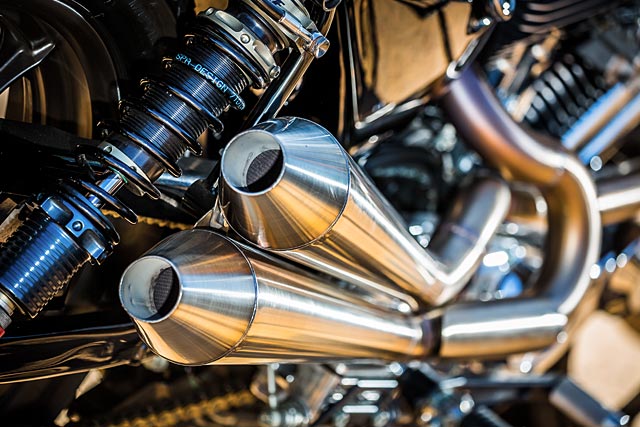 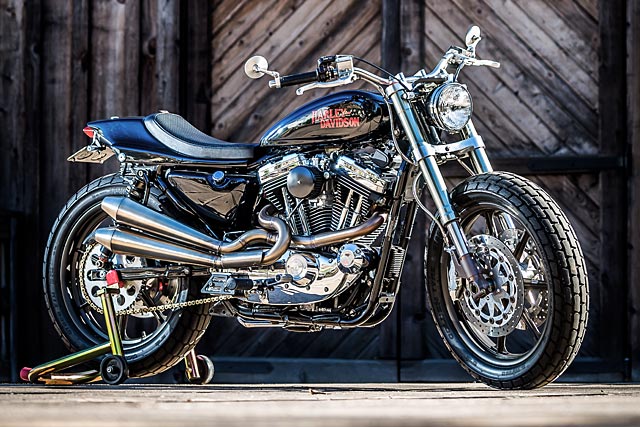 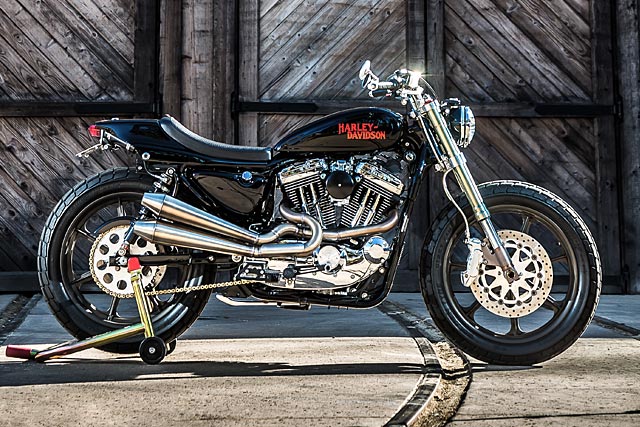