It’s always fascinating to look back and see all of the designs of what people think ‘the future’ will be. The Suzuki Katana is one of those bikes, completely groundbreaking when it came to style. But that was 1980. Now the Katana looks less futuristic and more abstract the faster time goes by. But there is no denying its history, which makes it a perfect candidate for a beautiful restomod.

The restomod game is full of vintage Ducati’s with very few other brands sprinkled in. Yet I can honestly say I don’t know the last time someone has done a restomod of a Suzuki, let alone a Katana. What ACP Customs has done to the dated Katana is spectacular. They have left the unmistakable bodywork and changed almost everything else on the bike. It’s Katana 2.0. But as always, let’s bring you up to speed on what makes the Katana such a special bike.

The Katana wasn’t originally an in-house project, like almost every other motorcycle to come out of Japan. Instead, the project was commissioned by the manager of marketing for Suzuki Germany. This naturally led to a German team being elected to design what would become the Katana. The team in question was newly formed Target Design, which was run by ex-BMW Styling Chief, Hans Muth. Once Target Design was hired, Muth reached out and hired two other designers from BWM, Georg Kasten and Jan Fellstrom.

Muth is the brains behind many beloved BMW’s, but now he was given full reign of the new ED2 project for Suzuki. With a unique sense of freedom, the Germans brought the future to the 1980 motorcycle scene. When the now dubbed Katana hit showroom floors it was so radically different it was met with a mixed bag of reviews. Some loved it, some were not totally convinced. One of those markets was America. Apparently US Suzuki declined to bring any Katanas over the first year for two reasons. The first, its image. It was too radical and the people in charge weren’t sure it would sell in a US Market. The second, and possibly more important reason, was the fact that AMA superbike regulations regulated the engine size to under 1000cc. With the Katanas 1100cc engine it wasn’t able to compete and therefore would make sales even harder. America would eventually get a special 1000cc Katana for one year, and then the 1100cc Katana we all know showed up in 1983.

The Katana was groundbreaking in style and rider positioning. When almost every production bike had upswept handlebars the Katana had clipons. It is arguably the first version of a factory superbike, although the frame and suspension were lackluster at best. It was at the top of the heap until Suzuki shocked the world with its GSXR design in 1984. The GSXR was a true factory road racer, and it was better than the Katana in every conceivable way. After that the Katana was an afterthought, rarely credited for being the motorcycle that brought even the idea of a street going superbikes to the world. And that’s what makes this ACP Customs Katana so special. They did away with the components that really held the mighty 1100cc bike back. Their Katana isn’t just a restomod, it’s a tribute to one of the most under-appreciated motorcycles to come from Japan.

So what did ACP Customs change? Where to start. The overall mechanics are there, but they have been what I call, highly revised. The frame features bracing to stiffen it up, a much-needed treatment for any motorcycle of this era. The bracing continues to the rear swingarm, which was done by Over Racing and finished in chrome. The suspension is all new as well: The front fork was swapped for an Ohlins USD unit, requiring a new set off triple trees in the process. The new rear piggyback shocks are Ohlins as well, giving the Katana a nice pop of gold. Add in a pair of one-off magnesium wheels and this Katana is a whole new bike.

The mighty engine has been bored to a 1200cc unit, with a Ward top-end oiling kit, Earl’s oil cooler, and Keihin flat-side FCR carbs. The engine also received a new hand welded titanium exhaust that was put together by Nitro Racing. With a full suite of electronics, the Katana’s engine was brought back into almost the 21st century. The engine is still an air and oil cooled mill from the 80’s, which gives it that iconic sound and smell we should all know and love.

ACP Customs did a great job of keeping the single most distinguishing factor intact for this Katana, and that’s the bodywork. Keeping those original lines is what makes this restomod so special. The Katana is finished in Porsche silver with period correct OEM decals. A beautiful touch to what I would consider the perfect build. As someone who grew up pre-dated by the Katana, I never appreciated how ahead of its time it really was, but with the new components underneath it has taken on a whole new look, one that is pretty impressive. Not bad for a 37-year-old motorcycle.

Regardless of what your thoughts of this restomod are, you can not deny the impact the mighty Katana 1100 had on motorcycling today. I know I didn’t respect this bike much before diving deep into what it took to produce it. I’m glad I did, and I’m glad the guys at Target Design were bold enough to design a bike so ahead of its time. If they didn’t we may not have had the bikes we do today. 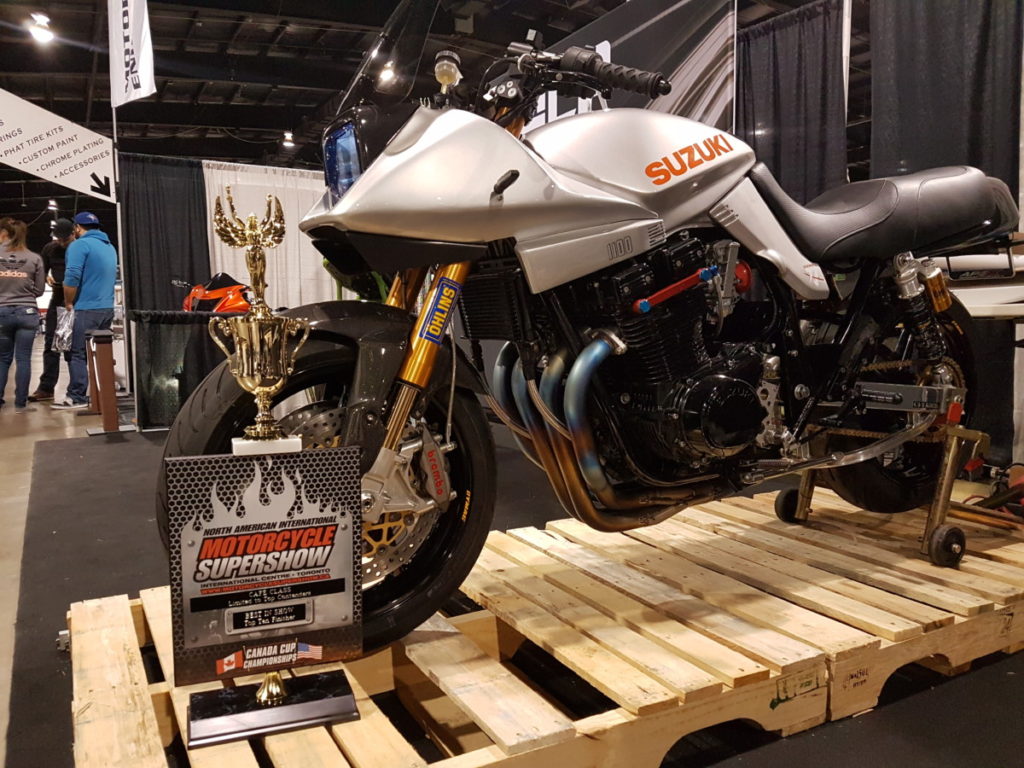 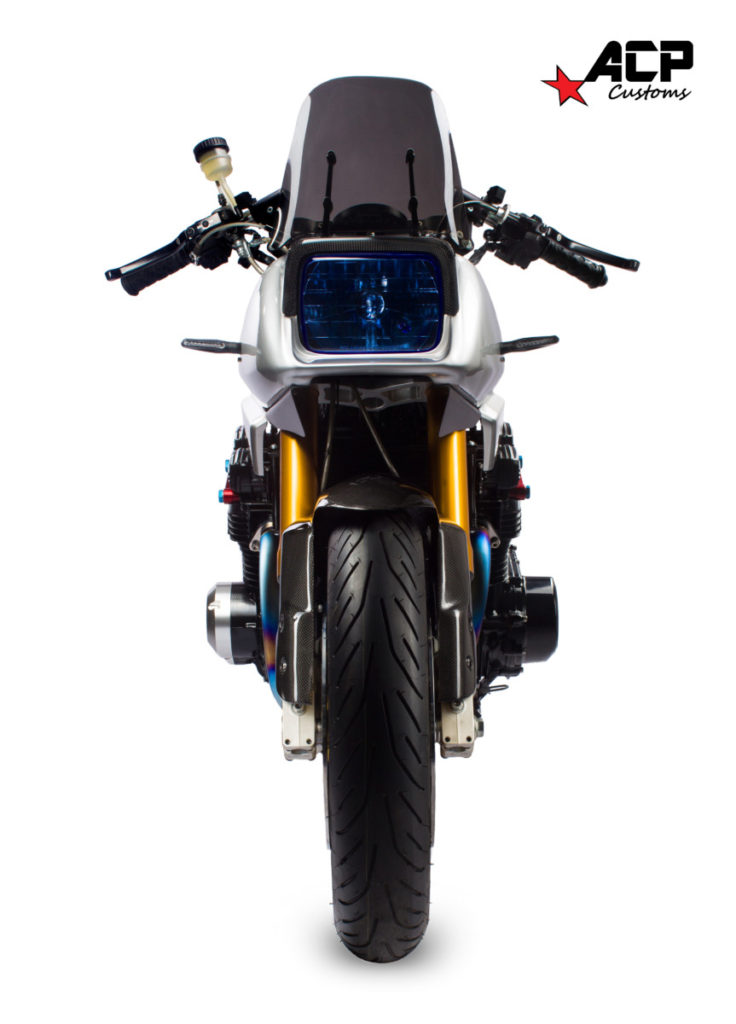 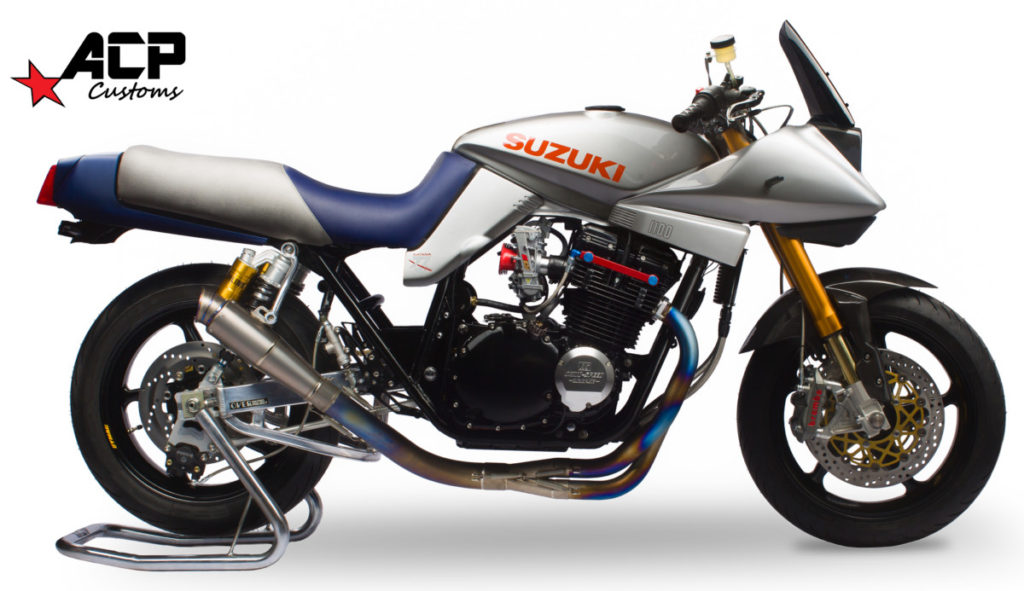 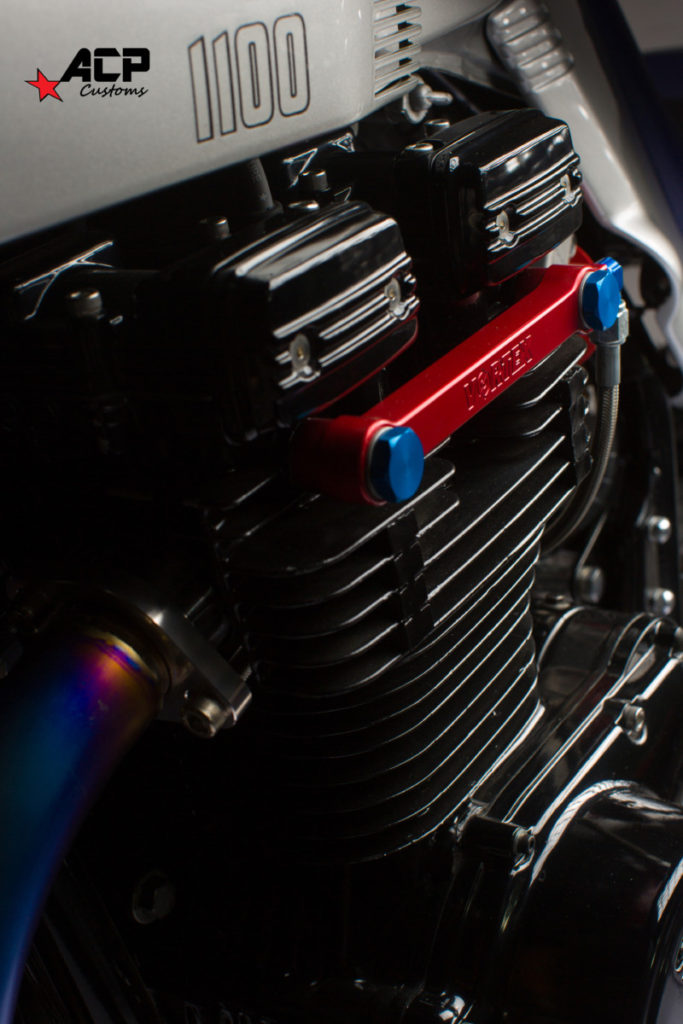 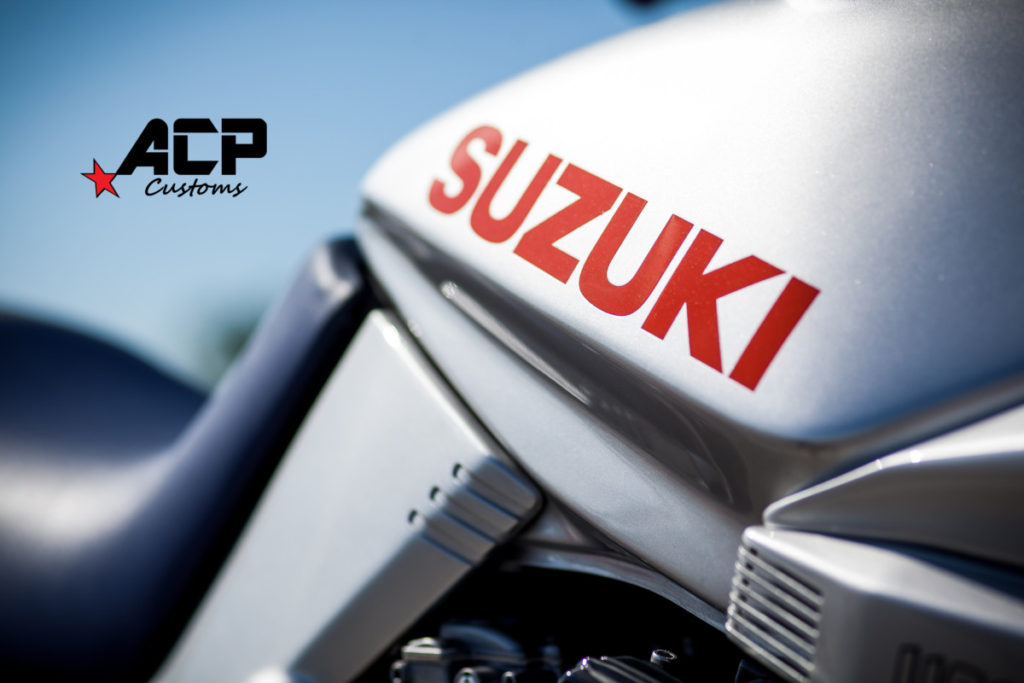 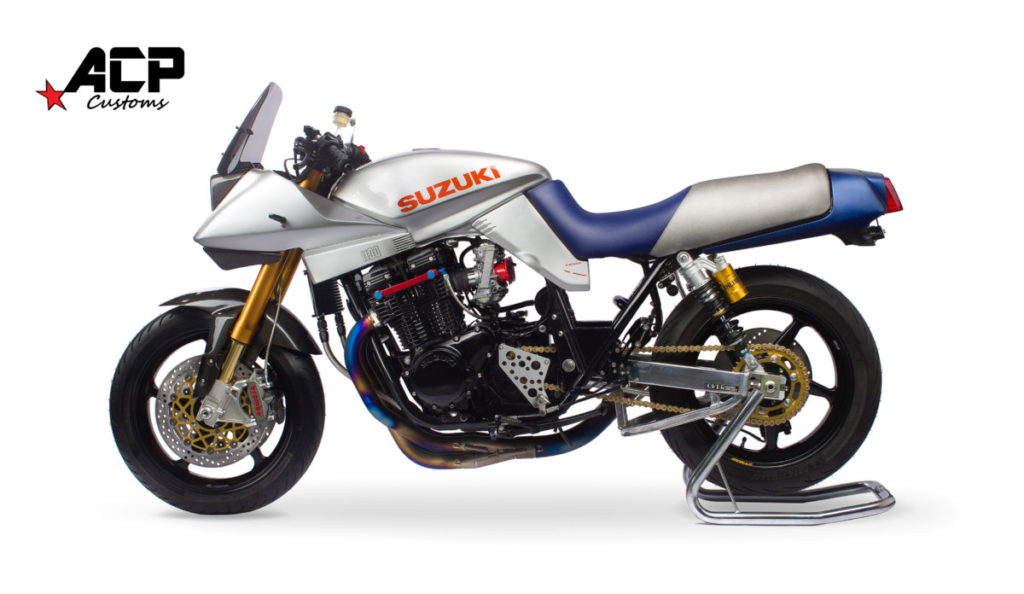 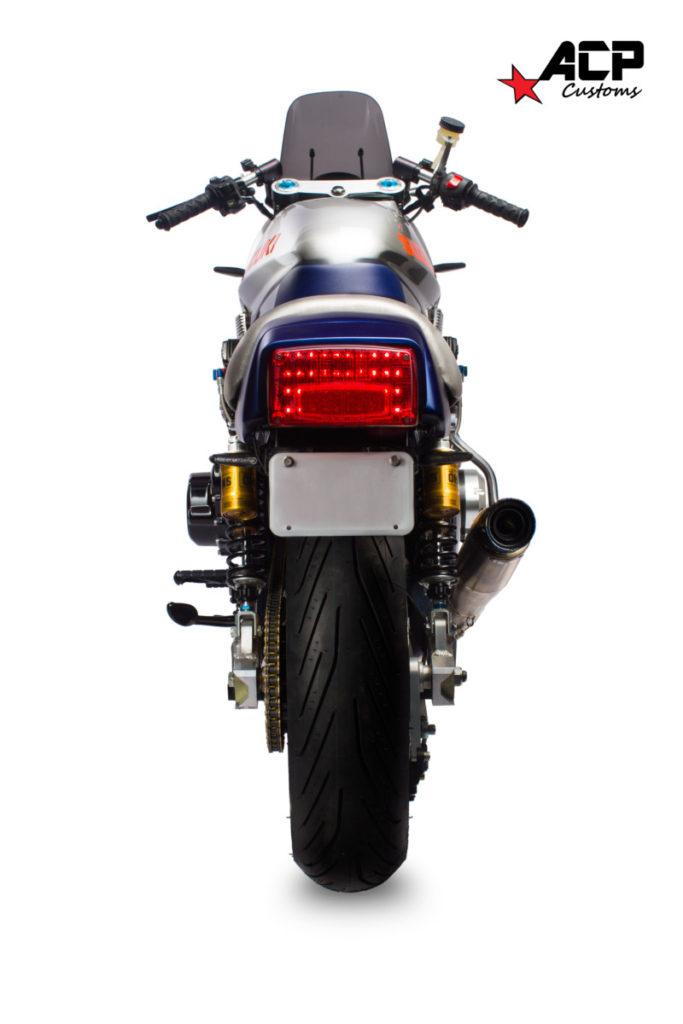 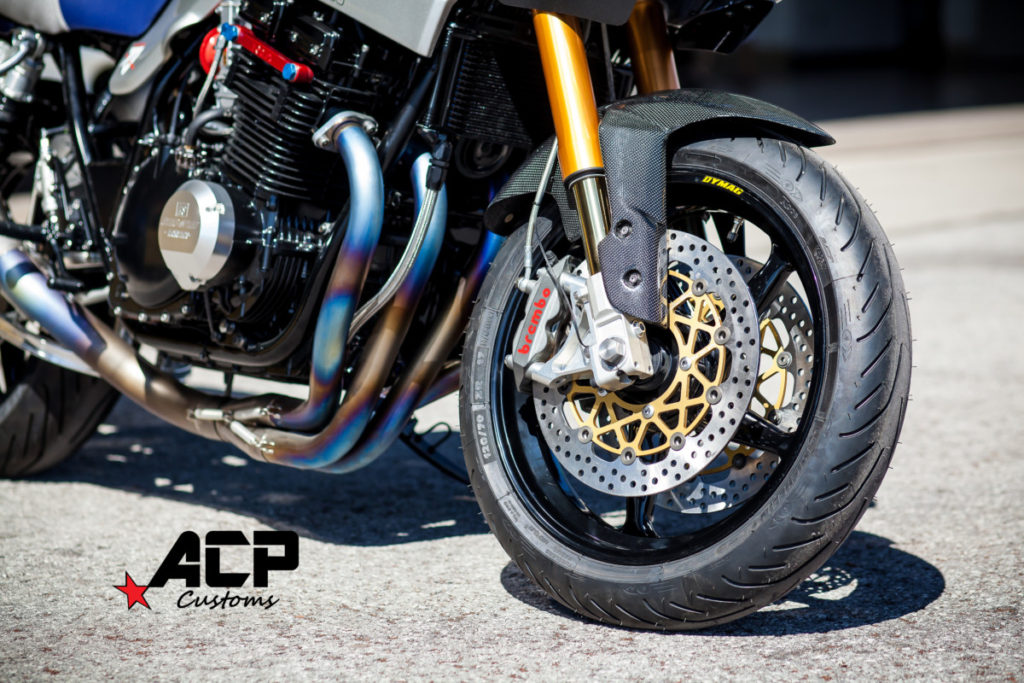 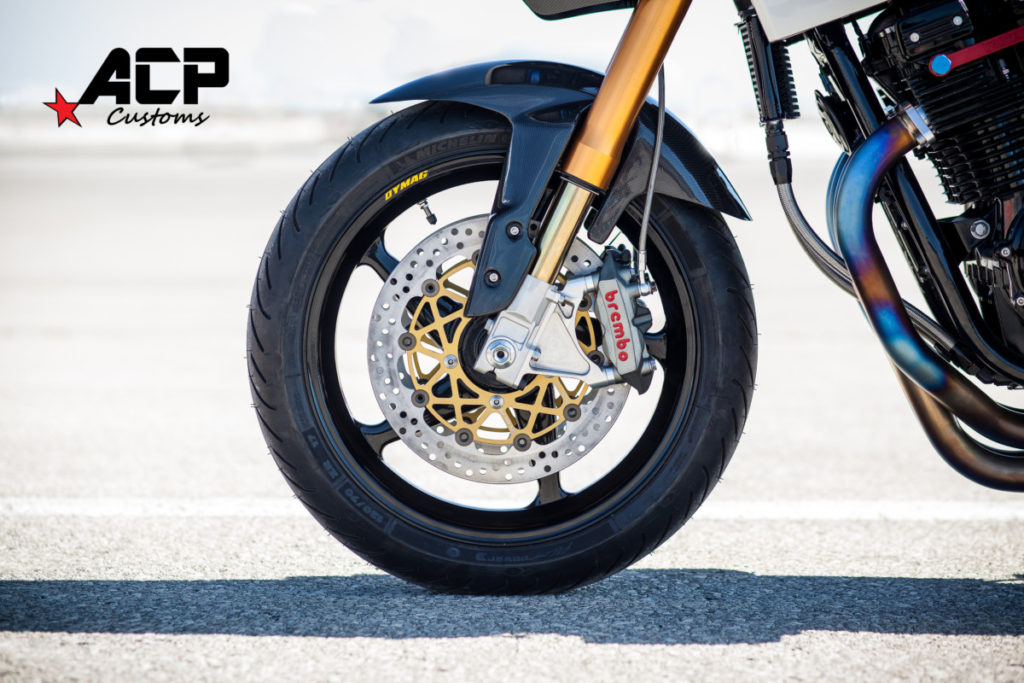 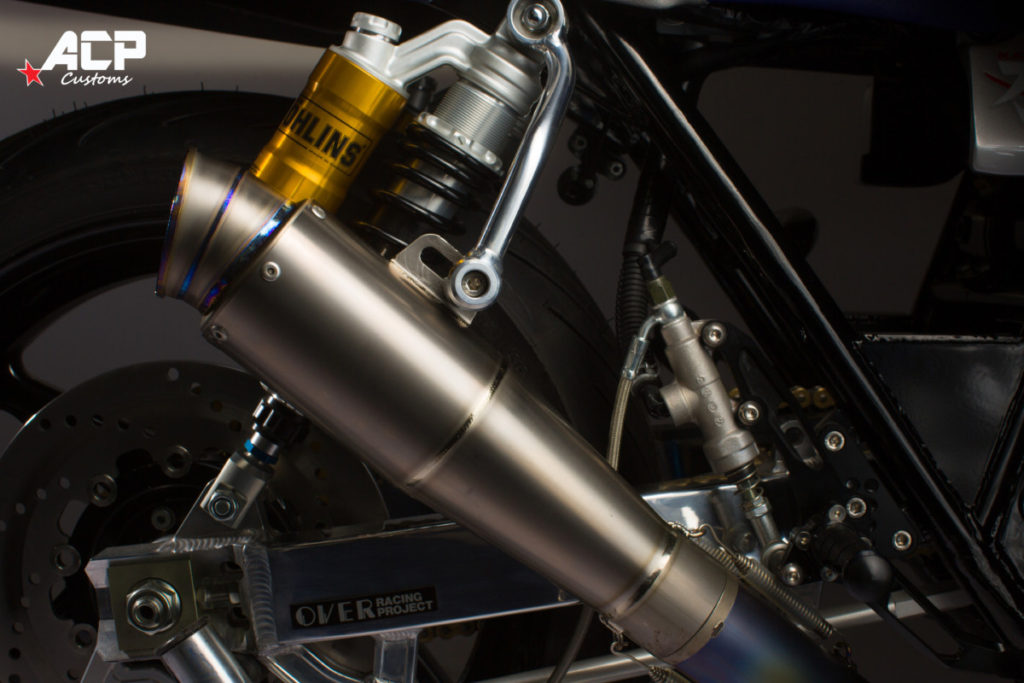 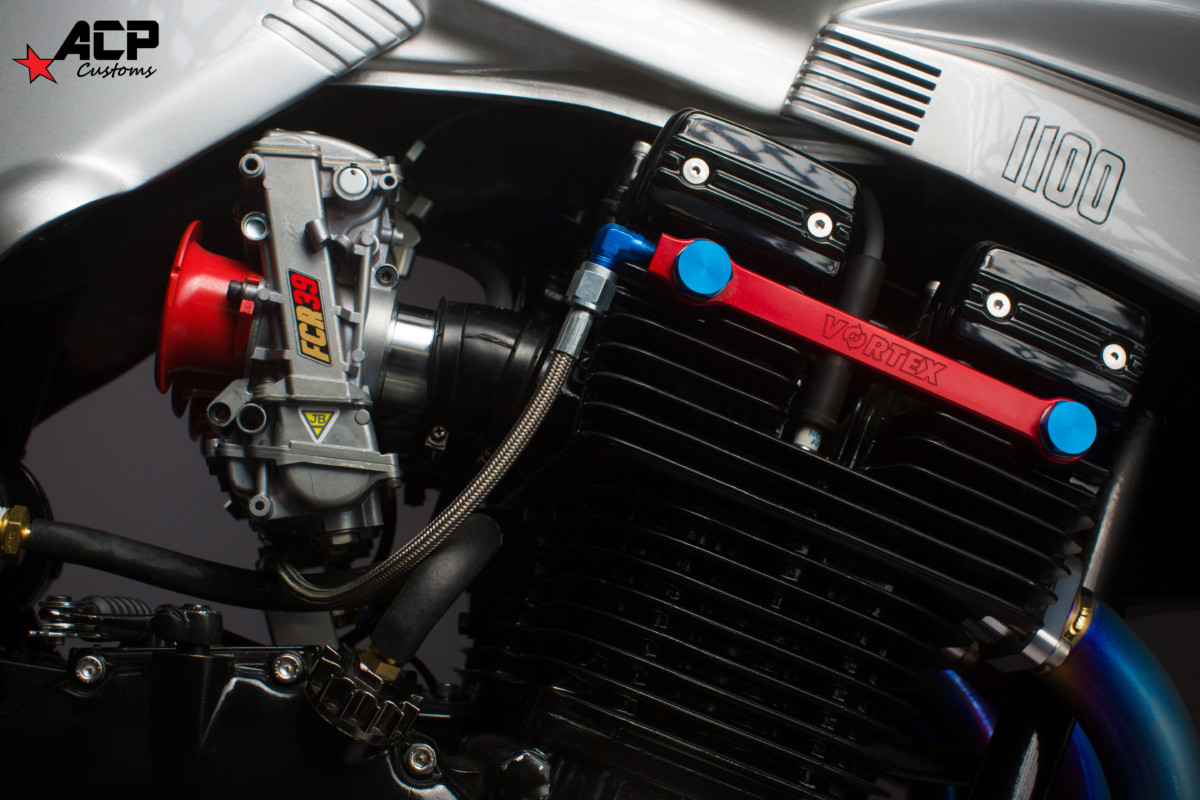