There is a love/hate relationship that comes with once a year events. Unlike MotoGP, Pikes Peak is a one and done event. That means we have to wait until next August to see it go down, but it doesn’t mean we have to stop talking about this year’s event. Bikes included.

Pikes Peak is an absolutely stunning event. 12-miles, 156 twists and turns, and a staggering 4,720ft in elevation gained. That is amazing. And the machines that are built to tackle such a monstrous mountain are just as impressive. We all know KTM and Chris Filmore won the overall in this years event, but that doesn’t mean they had the coolest machine. In fact, I would argue that the BOTT XR1R is the true winner based on style alone. Even still the XR1R isn’t just for show either, it finished 4th overall, and won its class.

The XR1R is based on the Buell’s XBRR race bike, an ultra-rare bike with only 56 units sold in 2007. That means the heart of the XR1R is an incredible 1340cc Vtwin with more titanium and magnesium than any Harley based engine. “It is an incredible engine, with brutal torque at low RPM and a sound that gives me goosebumps every time I warm it up,” says David Sánchez, the boss of Bottpower. The entire premise behind this machine was to make a package that was both fast and beautiful, something they well succeeded at.

“At the same time I wanted to keep using the air-cooled V-twin engine, which I love because of the aesthetics, the sound, and the character.” – David Sánchez

So Bottpower started with an XBRR, but what they really wanted was the engine. They ditched the entire frame, reusing only the rear swingarm, rear brake setup, and exhaust. Everything else went into the ‘not good enough’ bin. From there they team got to work, radically redesigning the bike, with Sánchez saying, “The idea was to build a bike with better performance, which meant looking for more power, less weight, and better components.” They managed this by producing a backbone designed frame. This new frame uses the engine as a stress-member, similar to how Ducati builds their machines. They have two versions of this frame, one from aluminum and one from Titanium. Unfortunately, Pikes Peaks rules don’t allow that wonderful Ti’ frame from being used.

With such a radical frame change comes other design issues. The backbone design doesn’t allow room for the stock airbox, which in turn means no room for the gas tank. Easiest solution? Move it all. The gas tank has been relocated just under the seat, giving the bike a lower center of gravity in the process. Where the tank would normally be is now all airbox, feeding that behemoth just below it. Bottpower even designed a couple of ram air intakes, which I’m sure are fully functional, but even if they weren’t they just look great. The XR1R is finished off with a carbon fiber belly pan and tail section, adding aesthetics while reducing weight.

The next major upgrade for the XR1R comes in the form of a new front end. Buell has always been so focused on new construction concepts that they sometimes overlook what works best. For the rest of the world that is all Öhlins and Brembo. While the shock is a standard Öhlins TTX unit, the forks are about as rare as it gets because they are built by CeraCustoms and use carbon fiber components with Öhlins TTX25 cartridges. The result is 2.2lbs of savings in the forks alone. Bottpower also ditched Buell’s ill-advised rim brake setup for a conventional Brembo system. And of course, they mated these to a set of Rotobox carbon fiber wheels.

Because of the rigorous demand Pikes Peak puts on these machines tuning was absolutely crucial. While I’m certain Bottpower could have managed this in-house, they had an ace up their sleeve when it came time for prep. “We worked with IDS, the company that designed the electronics of all the Buell and EBR bikes,” says Sánchez. “They designed a system to adjust the engine mapping depending on the altitude, and it worked great from the first day.” Go with the guys that built it, not a bad call. Combine that with AIM’s class-leading data acquisition system and you have a bike that can tackle any road in the world, even the legendary Pikes Peak.

For next year Bottpower is looking to make even more changes to the XR1R with hopes of serious glory. First is going to be the addition of a new electronics suite, one with traction and wheelie control. Then little things like a new exhaust and Brembo rear brakes. The whole goal is lighter and faster, something we all strive for. But the biggest change will be the pilot. Sánchez has announced they will be using Rennie Scaysbrook, this year’s second place overall finisher.

It will be exciting to see what the Bottpower team can do for next year, but I have no doubt that it will be a gorgeous run into the clouds. 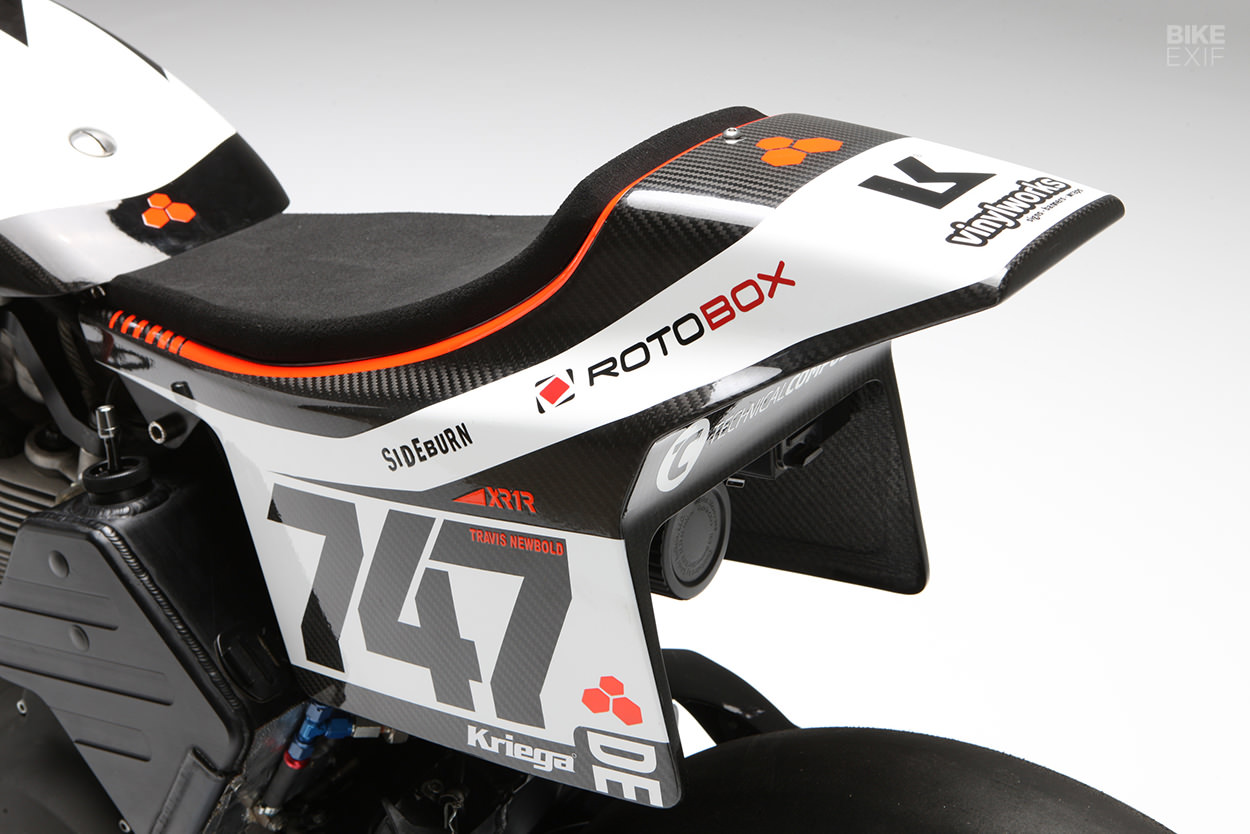 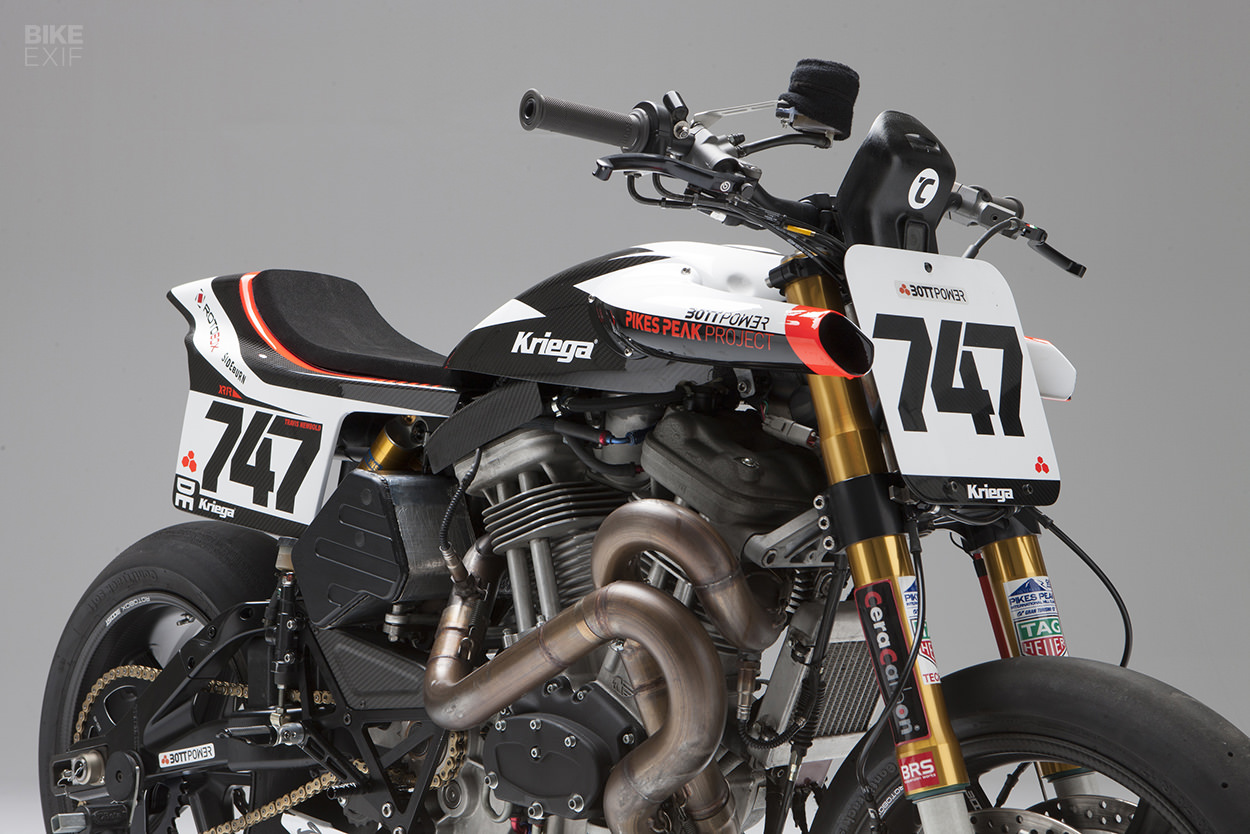 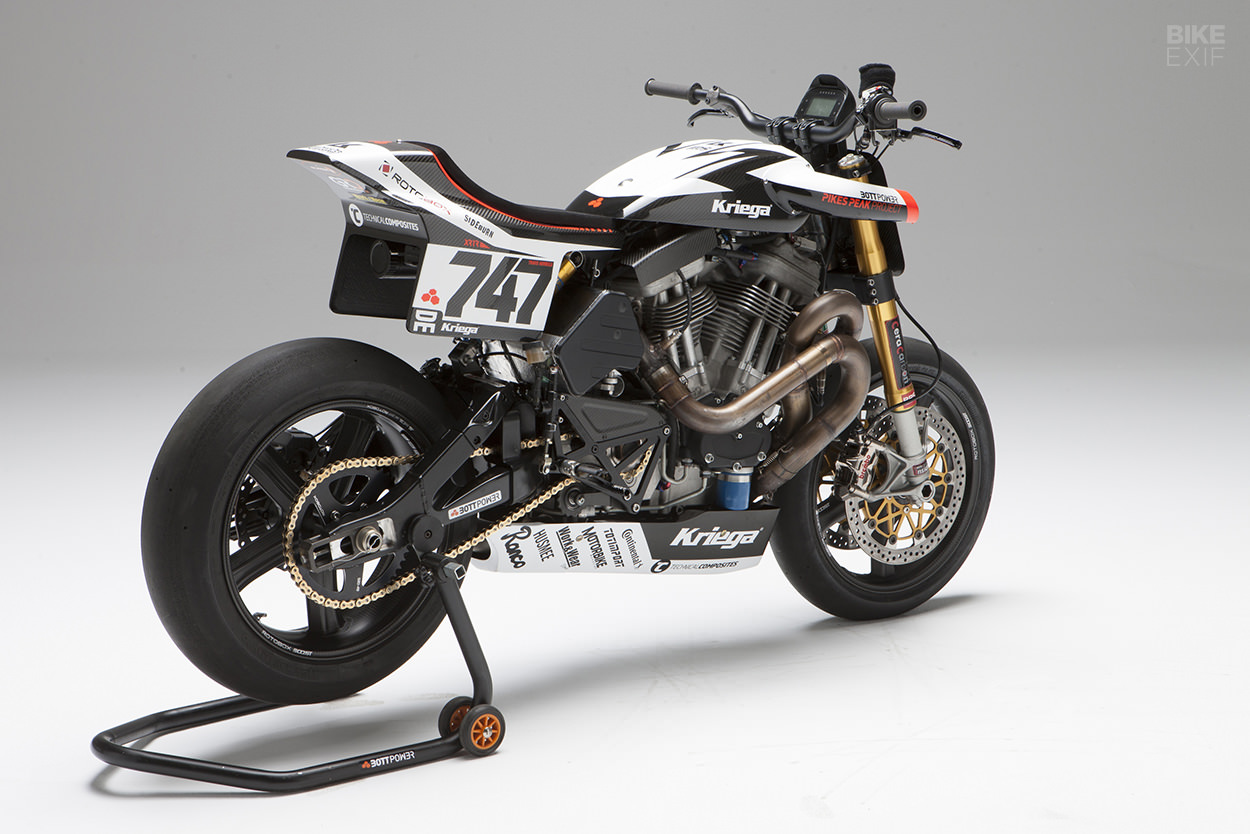 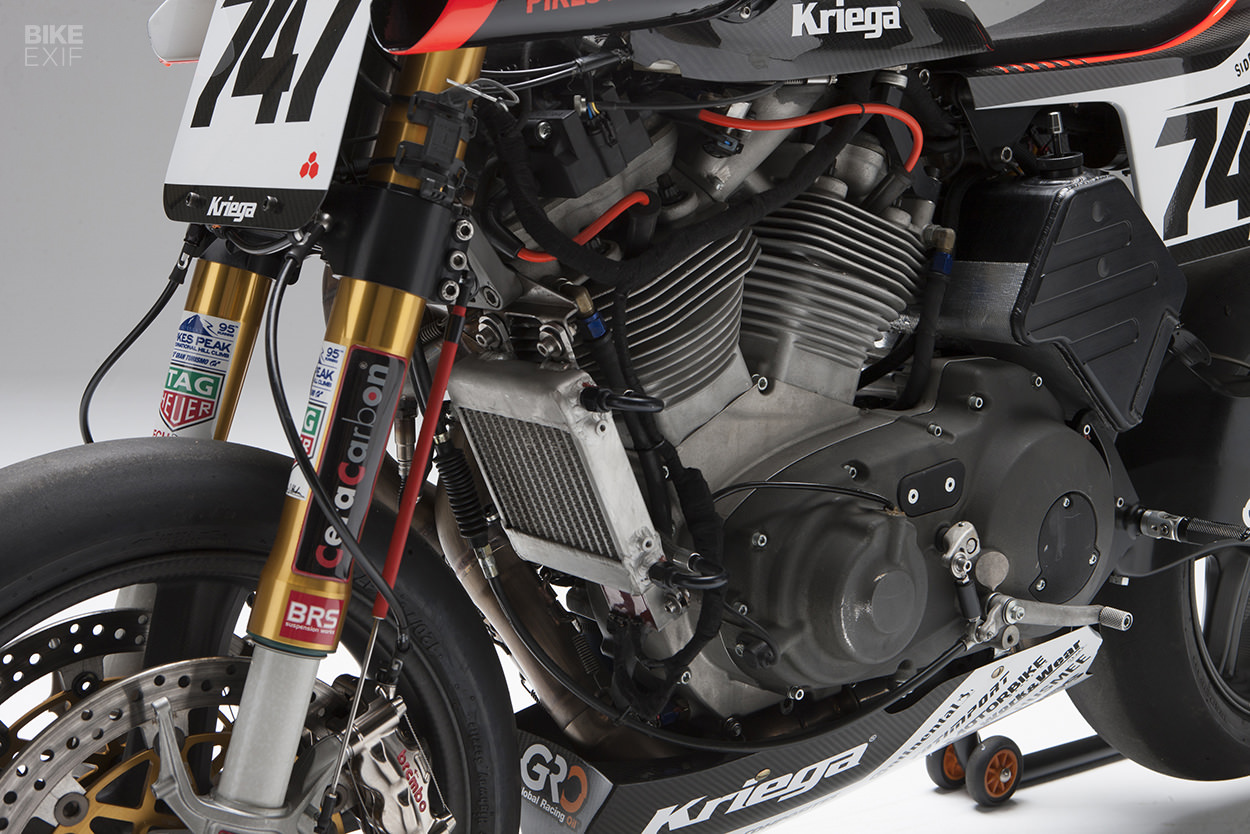 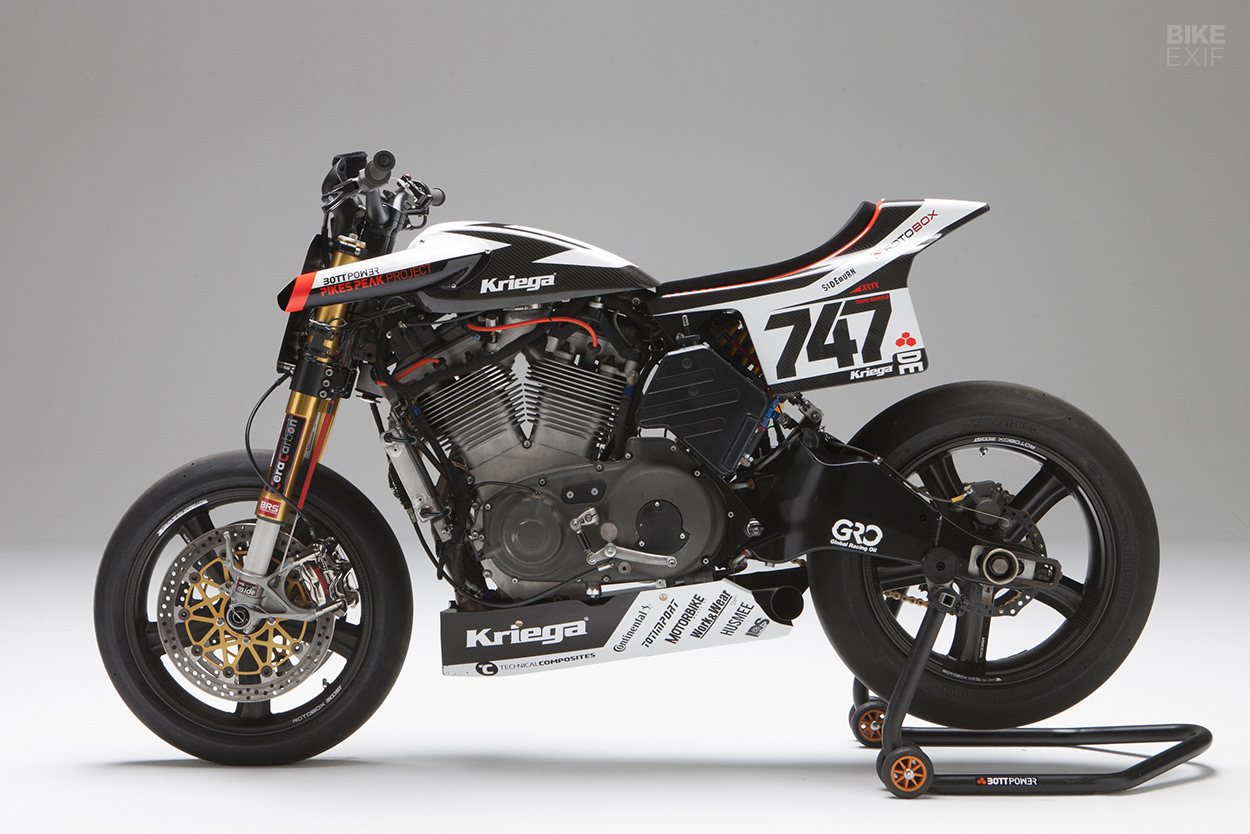