Does anyone here remember the ‘Boss Hoss’? A cruiser with a Chevrolet V8 crammed between your legs? Well, that was, in fact, a thing. They may even still be around, I don’t know, and I don’t really care because, in theory, a V8 motorcycle does sound awesome but in reality, it was trash. But now there is a V8 motorcycle that proves there’s always an exception to the rule.

That exception is the PGM V8, a missile called a motorcycle. It’s being billed as the most powerful production motorcycle in the world, and it actually looks the part. And yes, it is built in Australia. I don’t know what they put in the water out there, but the land ‘down undah’ sure knows how to build some seriously insane machines, and yet they keep a sense of functionality. I absolutely love it.

So what is the PGM V8? Well, I’m sure you can gather it’s a V8 motorcycle. But unlike the portly ‘Boss Hoss’ the PGM is sporting a transversely mounted 2-liter engine that produces an ungodly amount of horsepower. Remember when everyone lost their minds over the Kawasaki H2? Yeah, this thing makes that bike look like a chump. With 334hp on tap, the PGM even makes the H2R look like a slouch, outmuscling it by 24hp. More than that, the PGM produces 43lb-ft more of torque than the H2R, for a grand total of 158lb-ft. That’s some serious Austrailian muscle.

The engine is a 1996cc 90-degree V8 that PGM constructed themselves. The PGM engine has 40-valves, equalling 5 per cylinder. This, along with the general aesthetics of the engine, leads me to believe that the engine was constructed using Yamaha R1 parts. Don’t get it twisted, that doesn’t discredit the fine job PGM has done constructing this truly unique engine, it just happens to make for an interesting commentary on how they did it. The most fun part is that the V8 spins to an incredible 13,500RPM redline, with peak power hitting at a crisp 12,800RPM. That makes this the highest revving production V8 in history, how about them apples?

The PGM V8 is crammed into a well-packaged chassis, with a lot more sportbike heritage than one might first expect. Weighing a portly 533lbs soaking wet, the PGM sits well within the ballpark of all muscle bikes. It comes in a hair over the standard H2 and 57lbs heavier than slender H2R. The team at PGM had to get creative with its weight savings technics to achieve this, utilizing carbon fiber just about everywhere. PGM utilized the best suspension on the market to make this monster handle, equipping the bike with Ohlins FGRT301 forks and a TTX Mk2 rear shock. The overall chassis construction is impressive, keeping the wheelbase to just 60inches, even with that monstrous engine.

Styling leaves a lot to be desired, but let’s be honest, you don’t buy a V8 motorcycle for looks. But considering the package, you couldn’t ask for much more. The riding position is also slightly surprising, considering the insane power output. The handlebars are swept back, making for a more comfortable package than the all-out sportbikes. the PGM is equipped with dual, 4-2-1 titanium exhaust system, finish with Akropovic mufflers. It adds character to the entire bike, finishing off what makes this bike so amazing, the sound.

Nothing howls like the PGM V8, and I mean nothing. At low RPM’s you would be hard pressed to tell the difference from a standard liter-bike. But when it’s at full clip… I can’t even put it into words, so I won’t even try. Check this out:

Mother of god that sounds incredible. And don’t forget, you get to enjoy an absurd 334hp while listening to that glorious sound. I just can’t imagine riding a bike with that much power, but I am more than willing to try. Too bad the PGM V8 runs a steep price tag of $180,000 USD, putting it up in price with some of the most elite motorcycles in the world. Question is, would you own this, or 3 H2R’s and enough money left over to replace those inevitably spent tires? Yeah, I’d pick the V8 also… 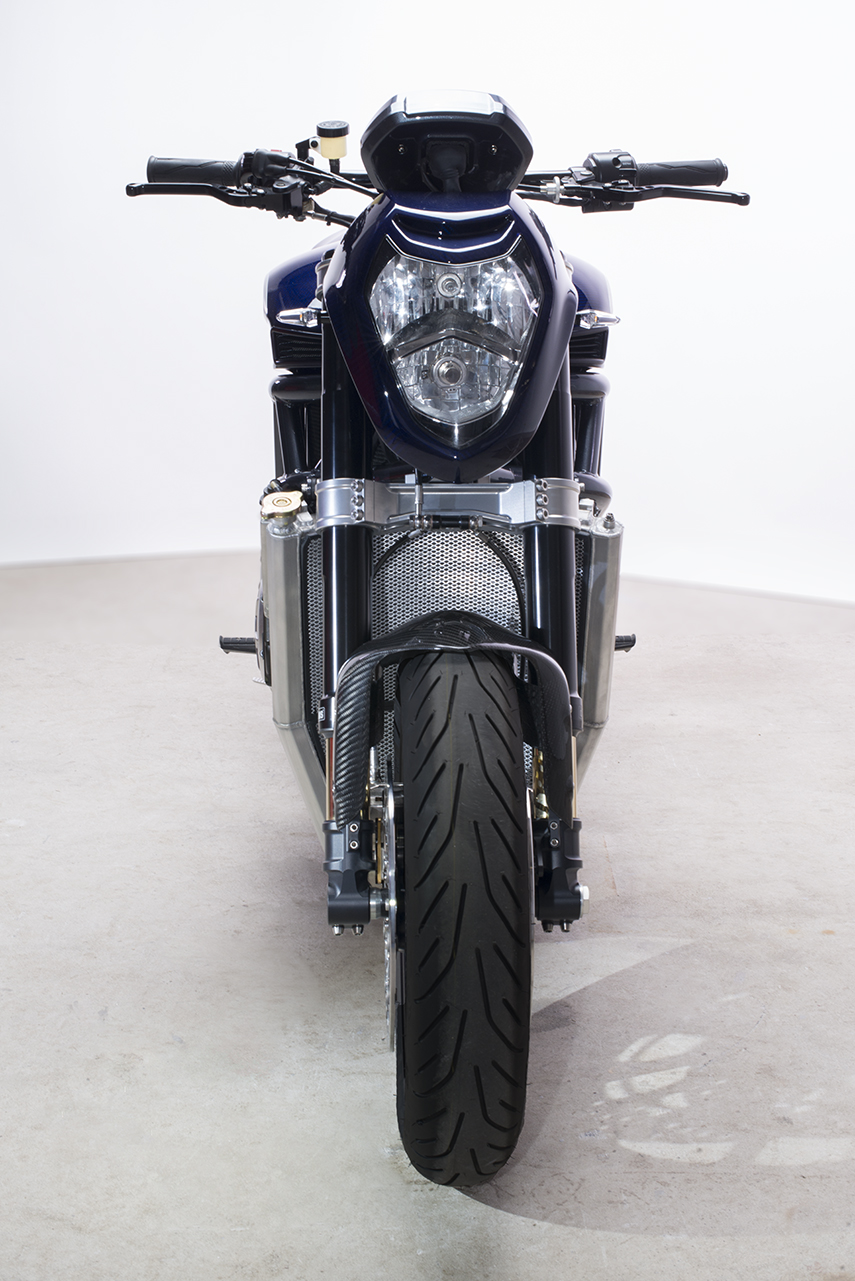 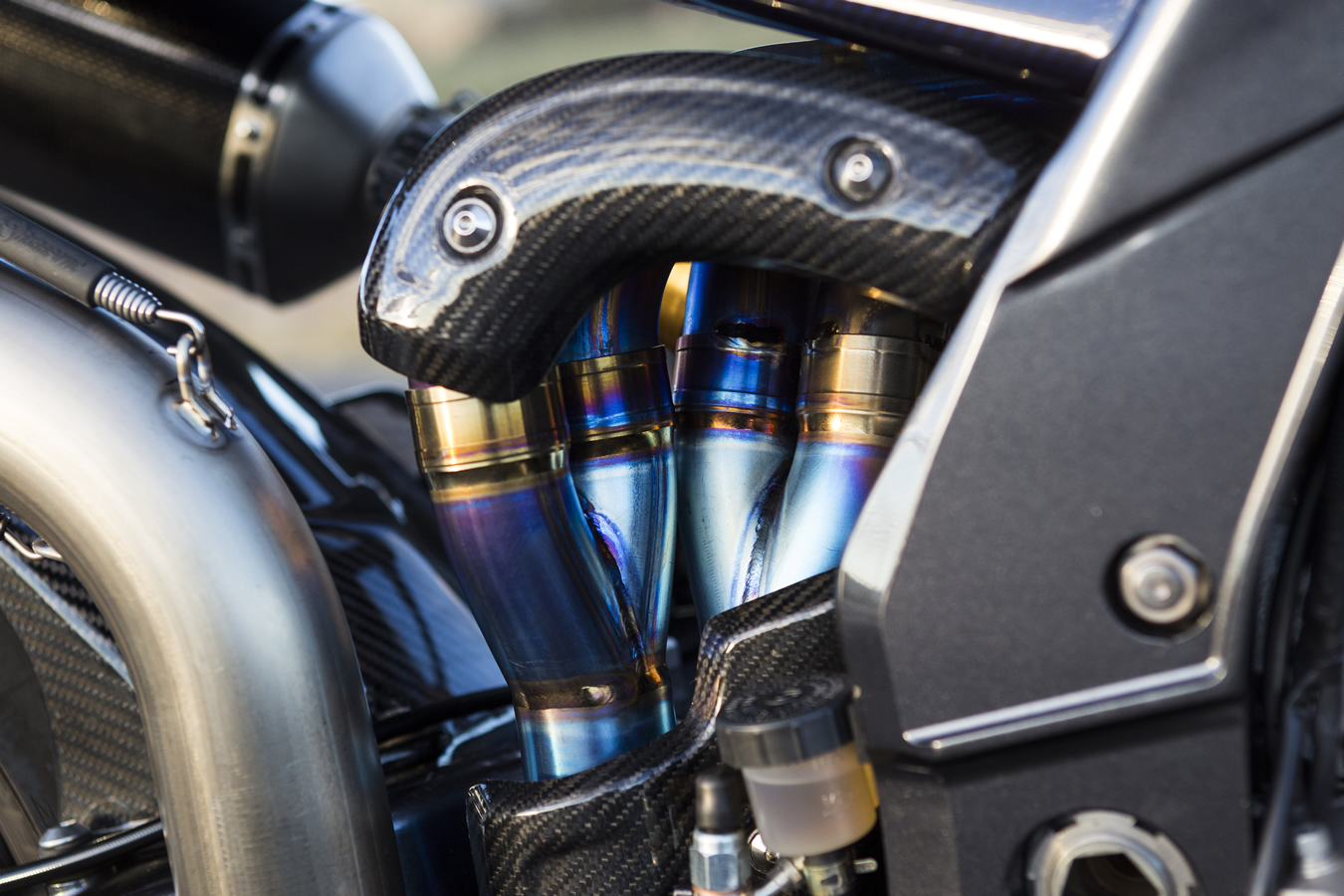 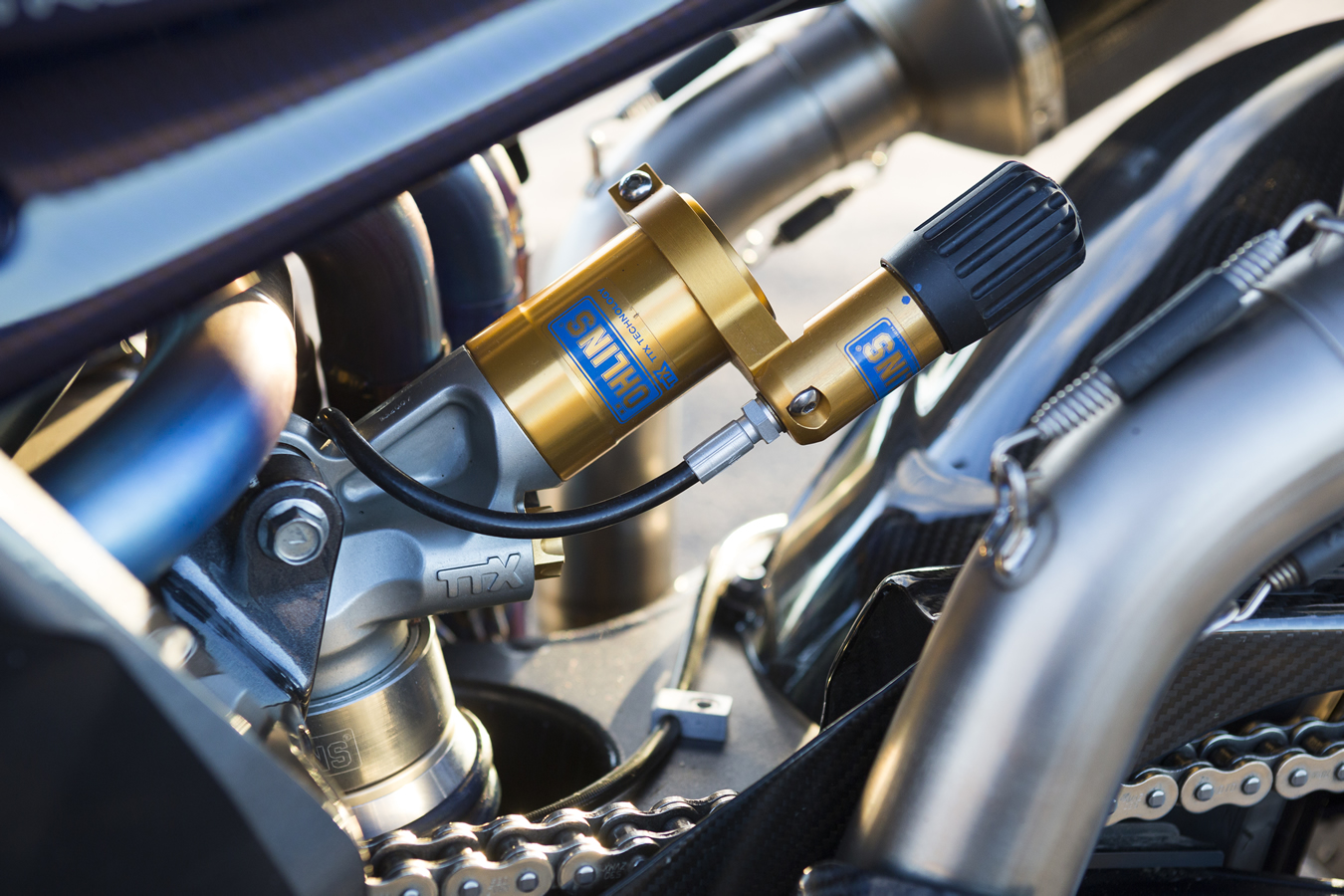 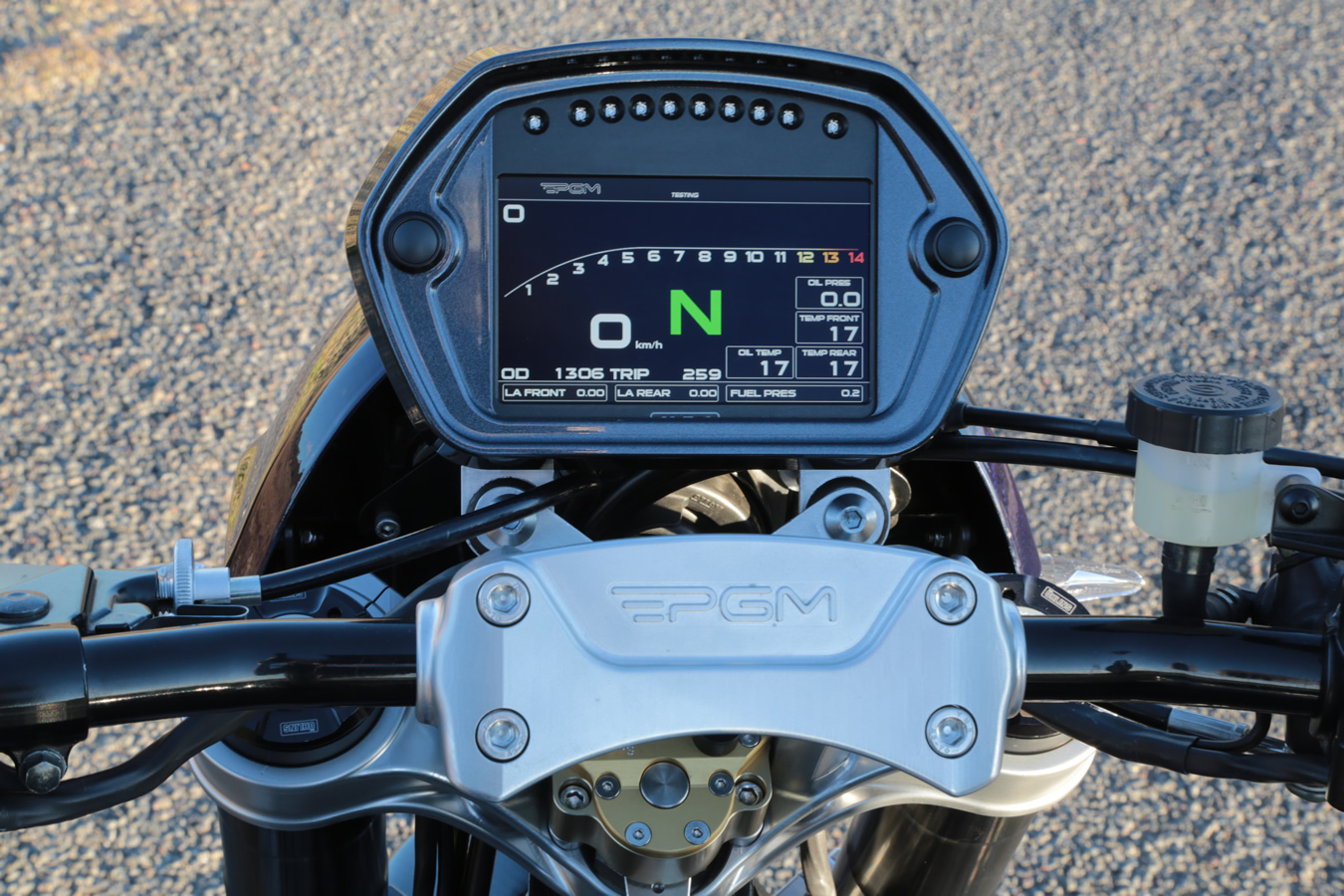 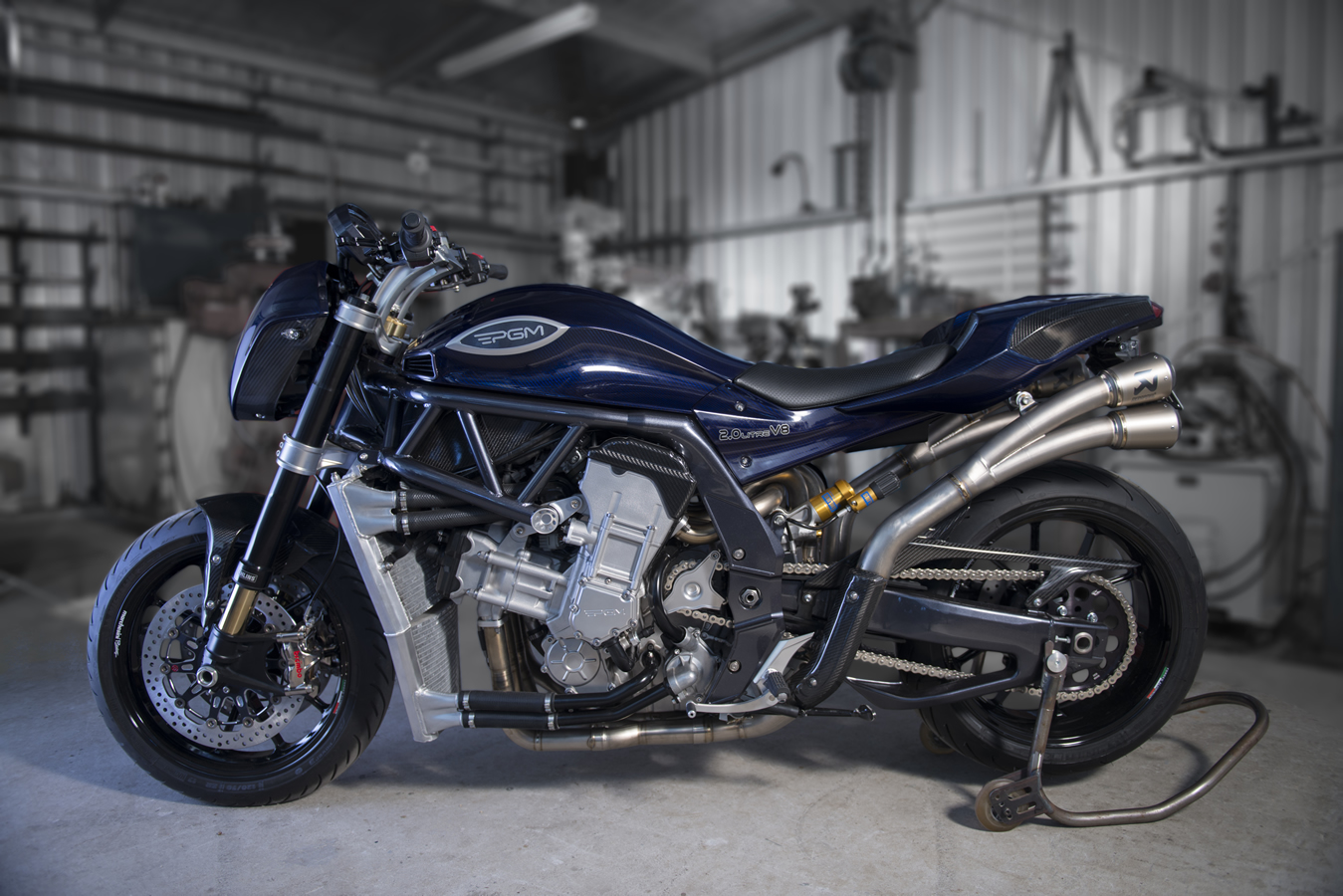 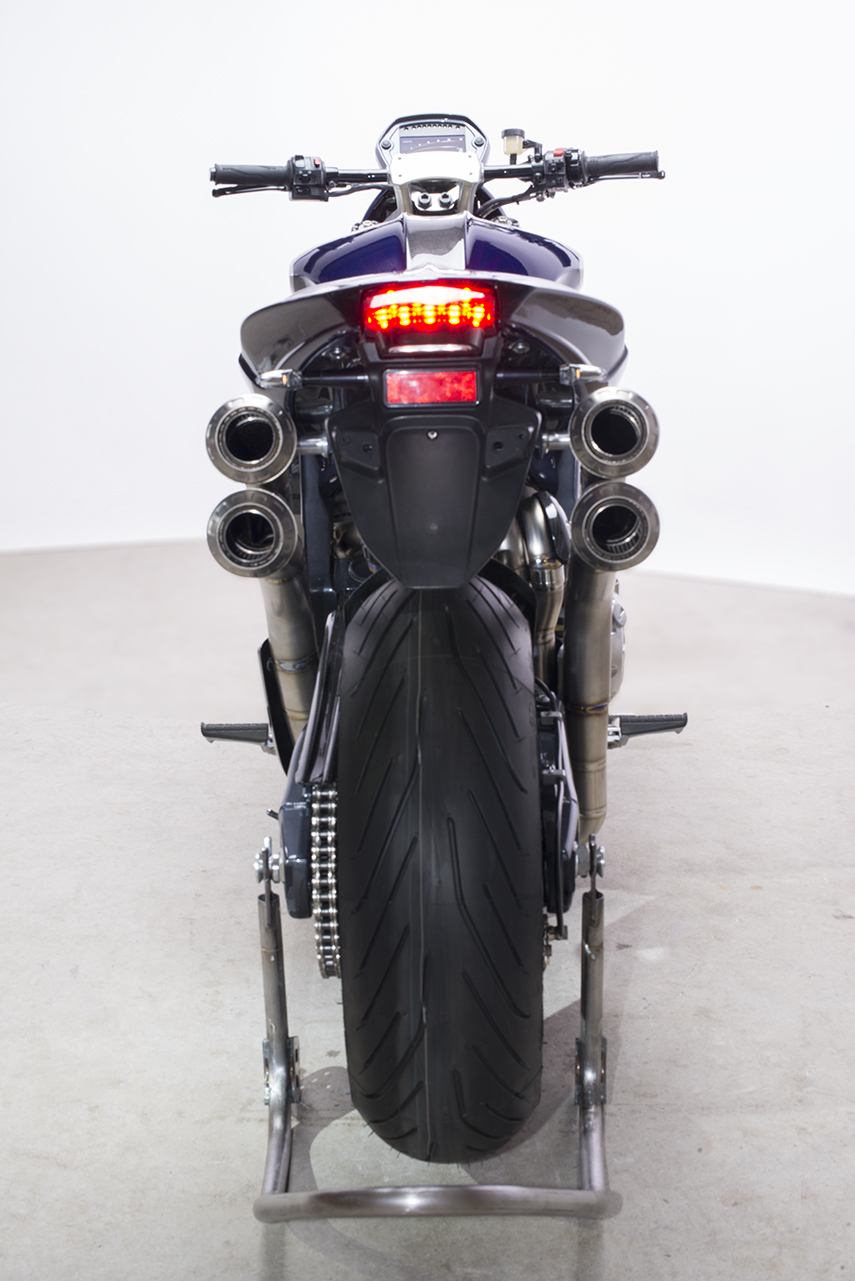 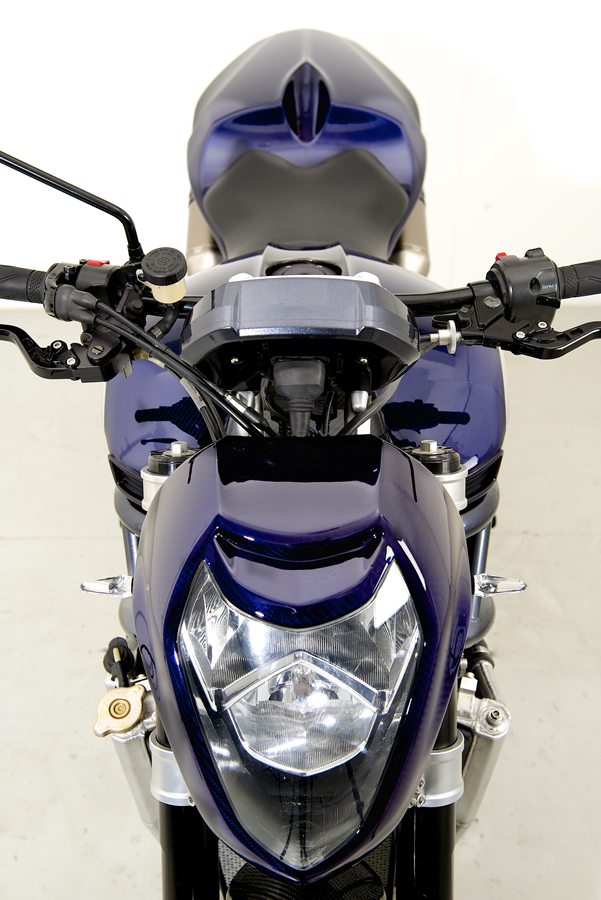