I’m going to switch it up a bit with this article. Normally I would tell you a few things about the vehicle and eventually get to the good stuff such as the power specs for example. However, this time I’m going to come right out with the specs. So here we go.

Ok so now that you know the specifics about what makes this wicked old Ford so badass, let’s talk about them a bit more in depth. It all started one day as Scott Birdsall was searching through Craigslist and came across this old 1949 Ford F1. To most people it would’ve looked like a big pile of scrap metal, however, Scott saw a masterpiece. It had the perfect level of patina that gave it a unique look and he knew it would look even better once it was all cleaned up and clear coated.

Birdsall paid $225 for the truck and had it delivered to his shop, Chuckles Garage, and it was there that the work began with the end goal of creating a one of a kind truck that would be capable of reaching up over 200mph. Although, interestingly it initially started as a “shop truck build,” but then obviously it became so much more.

As far as the body of the truck, it was already perfectly flawed so it was pretty much left as is. The stock power plant though wasn’t going to come close to cutting it. So Birdsall decided to upgrade it with a 12-Valve Cummins from a 1994 Dodge he had lying around. The 12-valve is highly acclaimed for being essentially bulletproof and incredibly strong so it seemed like the perfect fit. Having that extra power meant he needed a better suspension system too. He ended up choosing a Mustang 2 style system because it’s easy to install and provides good overall performance.

What happened next is what you would call the “snowball effect.” Scott wanted a bit more power so he upgraded the turbo, and the bigger turbo then required bigger injectors. Then the bigger injectors led to a twin turbo setup which required that the engine is moved back to make room for them. At this point, Old Smokey F1 went from being a bonkers shop truck to a “well-engineered road racer to reflect all the things Chuckles Garage is capable of.” The entire truck was stripped down to the frame and the only thing that was carried over was the two industrial turbochargers, and of course, that gorgeous patinaed sheet metal.

Scott and his crew proceeded to build a NASCAR style tube frame chassis and added to that. That old 12-valve Cummins, as stout as it may have been, wasn’t going to cut it anymore so they opted for a more modern Cummins that came from a 2005 Freightliner. They fitted the massive turbos to this beefy new motor and the end result came out to be one of the wildest turbo setups you’ve ever seen, and one that produced a mind numbing 106 psi of boost. Let me say that again, 106 psi of boost! This thing was so powerful that it almost didn’t even make sense, almost. It now produces 1,233hp, to the wheels, as well as over 2,000ft-lbs of torque which is more than enough to reduce even the biggest, widest, stickiest tires to a massive cloud of smoke and a pile of rubber dust.

They wanted the truck to be somewhat of a dual purpose build. It needed to be fast, really fast, because Scott plans to use it to become the first diesel powered pickup truck to reach the elusive 200mph in a measured mile. But Scott also has a bit of a sideways fixation, so he wanted to have it drift capable as well. That meant that it needed to have everything a drift car would have such as a hydraulic brake that’s connected to a dual caliper setup in the rear which should make it much easier to control the backend when it gets sideways.

Just in the off chance that isn’t enough performance for you, Scott and the Chuckles Garage crew added a 375hp shot of nitrous on top of the 1,233whp which will literally launch this one of a kind truck well beyond hypercar-level performance. Not to mention that it’s just flat out badass to be able to say that you can add the power of a base model V8 muscle car just by the press of a button.

Scott Birdsall and his crew at Chuckles Garage have built a true masterpiece with the Old Smokey F1. There might be other perfectly patinaed old restomod trucks out there, some of which we’ve talked about before. But none of them have the “wow factor” like this one. It has more engineering and design than some supercars have, even though it comes in a rougher looking package. This thing is a flat out monster in every sense of the word. Not only is it lightning fast, but when you see it out drifting, it has the sexiest stance you could ask for and it stays perfectly planted, even though it might be sliding sideways at close to 100mph. Plus it’s a unique sight to behold when you see the white tire smoke contrast with the jet black “rolling coal” smoke coming from the diesel. Needless to say, bravo gents, well done. 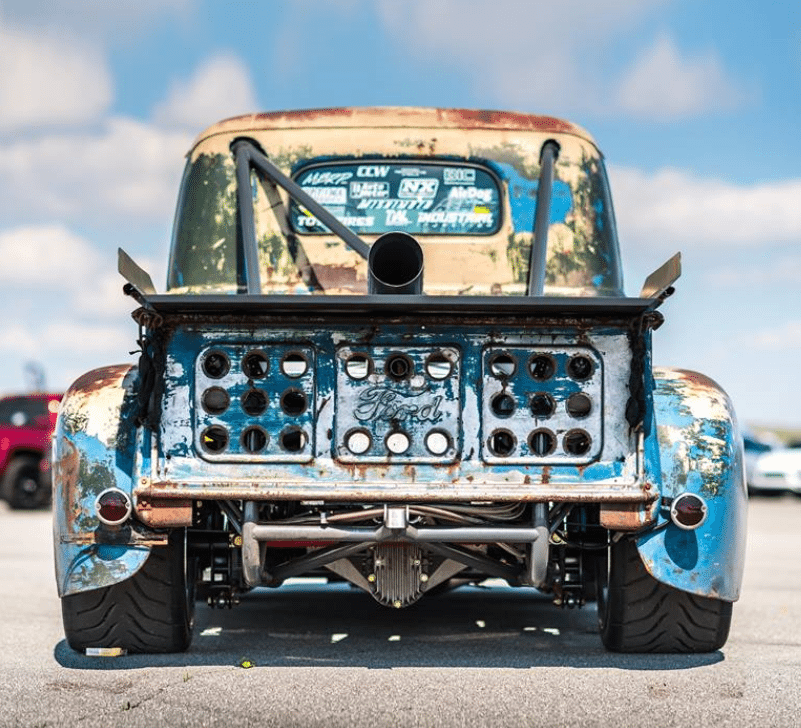