Bubble fairing cafe racers are all the rage right now. The new BMW R NineT Racer and Yamaha XSR900 Abarth are a couple of prime examples as such. Yet there is something magnificent about a one-off, custom built cafe racer that sets it ahead of the factory options. For a small shop by the name of Kacerwagen, in the south coast of Spain, they took the term ‘handcrafted cafe racer’ to a new level.

‘Pili’ is the name of the mad creation brought to us by Chus Valencia, the owner of Kacerwagen. While anyone can create a cafe racer from a CB750 from the mid to late 70’s, it takes real talent to create one from something more modern. And that’s exactly what Chus did. One of Chus’s existing customers decided he wanted something radical, and enlisted the hands at Kacerwagen to do his dirty work. He wanted his 2007 Aprilia RSV1000R to be a full blown cafe racer.

While you really should be familiar with the Aprilia RSV1000R specs by now, I will forgive your ignorance and take you on a brief trip down memory lane. The RSV1000R was a sportbike that ran from 2004-2010 with two generations of body styling. The RSV came equipped with a V-twin that produced a respectable 125hp and an exhaust note that could make an angel weep. It was, and truthfully still is, an amazing motorcycle. Yet I have heard from some that the styling was considered controversial. Even being called ugly. This is heartbreaking news to me as I think the RSV1000R was one of the best looking motorcycles from its generation, and is slowly creeping into the well respected timeless category.

If you weren’t a fan of the styling(AKA you’re crazy) then you will be happy to hear that this RSV is anything but recognizable. Chus has done such a great job of blending the new bodywork around the frame the entire motorcycle has taken on a new form. The frame that was merely meant to peek out from behind the fairings is now a staple of the entire build. The engine components no longer have a full fairing to hide behind, requiring Chus to tuck them away neatly, or boldly display them to the world. Chus was able to pick and choose wisely, ending up with a handful of beautiful, yet minor details.

The body work is something more fitting to Formula 1 than to a retro-styled cafe racer. Yet here we are. Carbon fiber has been used for the entirety of the bodywork, giving that vintage feel enough angst to keep in line with that of the modern drivetrain. The weave used for the carbon is so fine, yet perfectly placed it gives Pili the appearance of an optical illusion. With a nice coat of lacquer, the carbon shines bright, proudly displaying all of Chus’s hard work.

An interesting aspect to this modern meets retro build is the quirks that come from using an Aprilia as the jumping off point. They are Italian after all. This means they are put together just a little different than those Japanese bikes we are used to raving about. For instance, that glorious 60-degree V-twin we know and love. For that engine to run properly it must have the perfect balance of air pressure coming into the air box, or else it will probably implode. Okay, maybe not that drastic, but apparently modding the air box on an RSV1000R is the easy street to engine issue city. Hence that giant air induction system that we love(or hate) that resides between the headlights.

Chus was more than willing to tackle this challenge though, and he did so with style. Wanting to use that bubble cockpit design with the single headlight Chus decided to build air induction vents that encompass the headlight housing. These vents allowed Kacerwagen to build his own ram air system, which goes directly into his own custom air box beneath the carbon gas tank. Gorgeous bodywork that doesn’t compromise performance? Now we are talking. Moving behind the long carbon tank resides a custom subframe that supports the carbon tail section and hand stitched leather seat. Finishing off the styling, Kacerwagen sourced a set of gold anodized Marchechini wheels and color matched forks, subframe and other small components. A superb compliment to the beautiful carbon layup.

While I love the RSV1000R in stock trim, this is undoubtedly one of the coolest bubble fairing cafe racers I have ever seen. With its sleek profile, light weight and more than enough power platform, Pili could possibly be the best modern cafe racer ever built. And don’t just take our word for it, take the word of Moto Madrid who gave Pili the highest of accolades. Or you know… Just look at it and see its true glory. 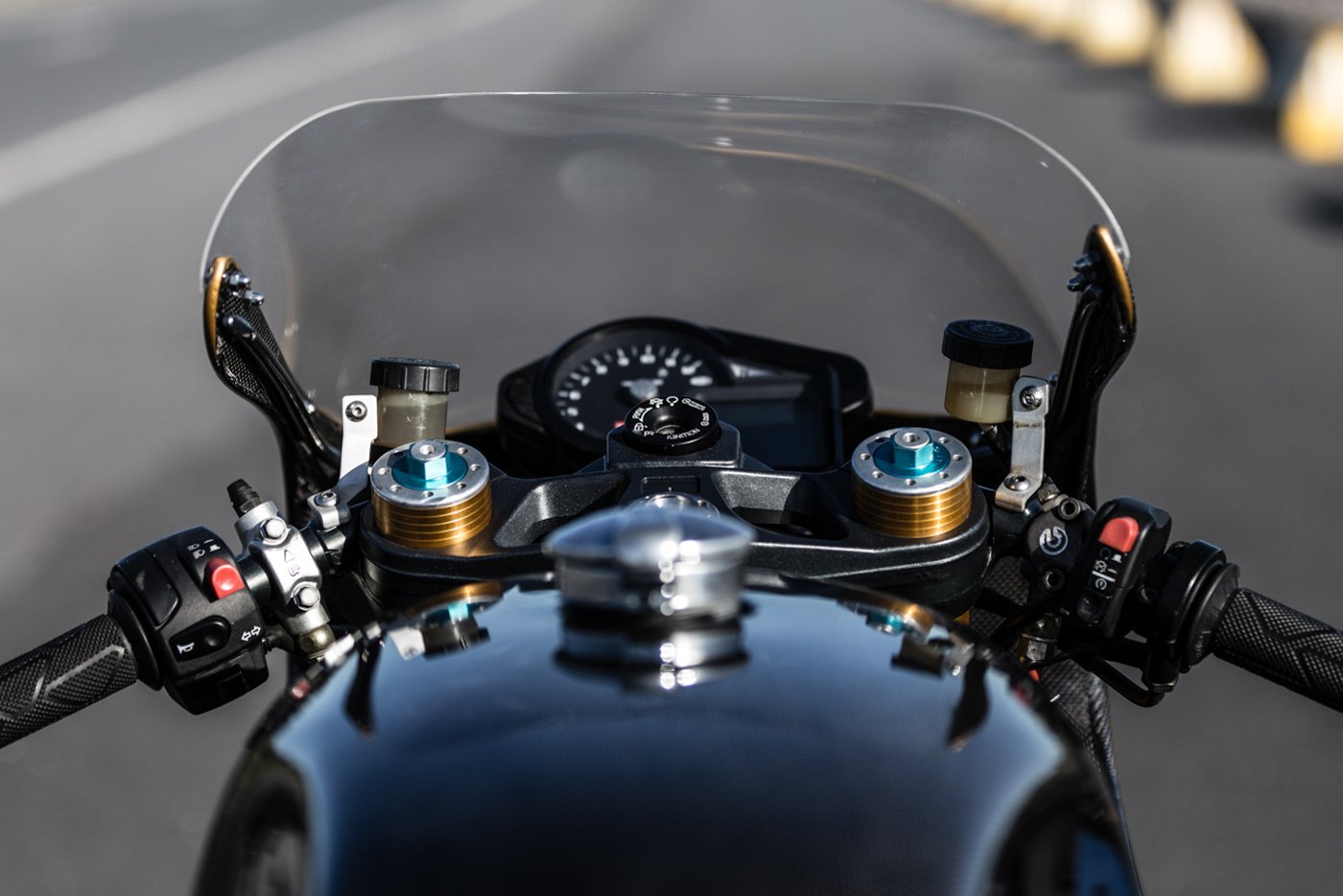 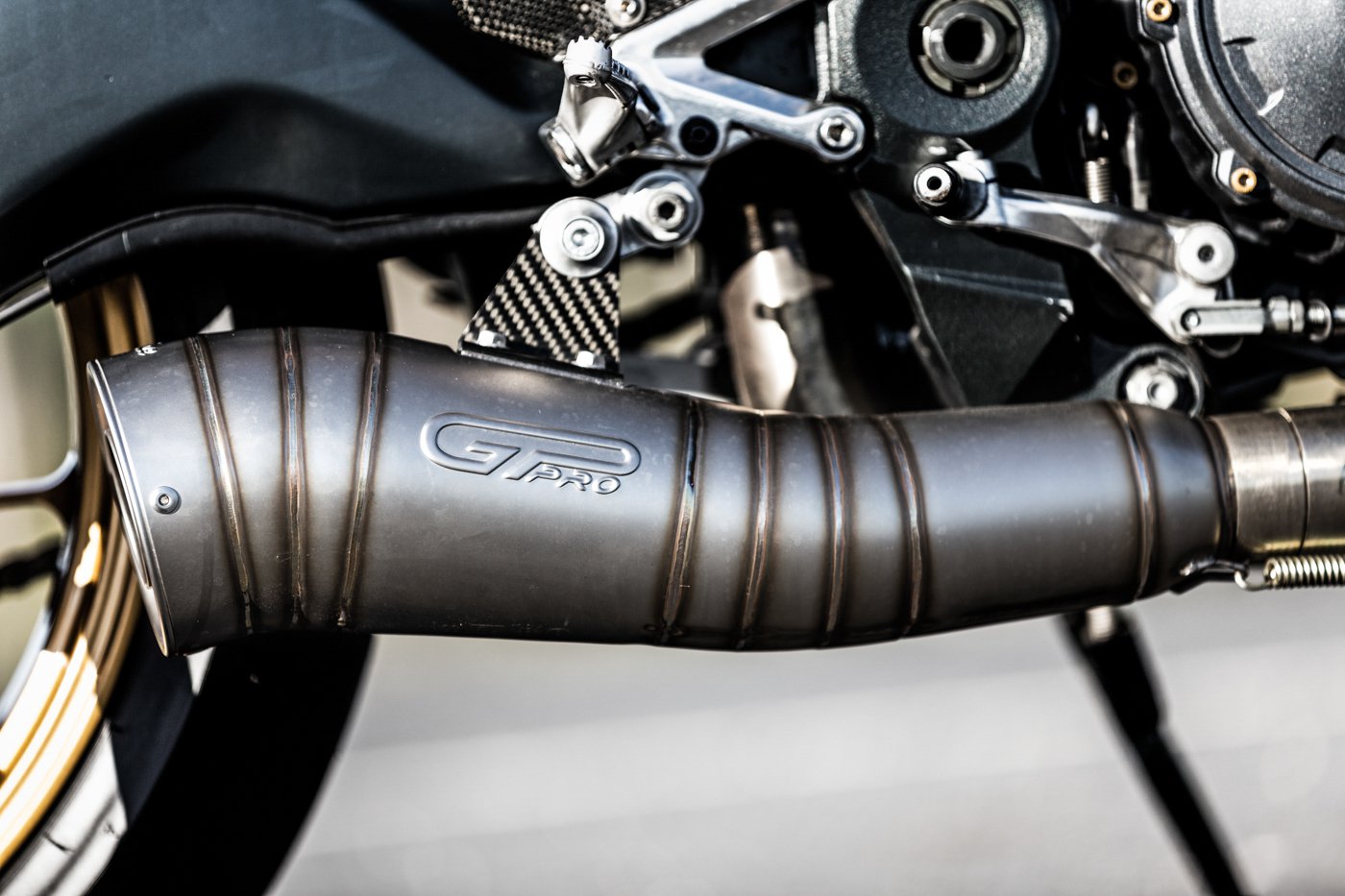 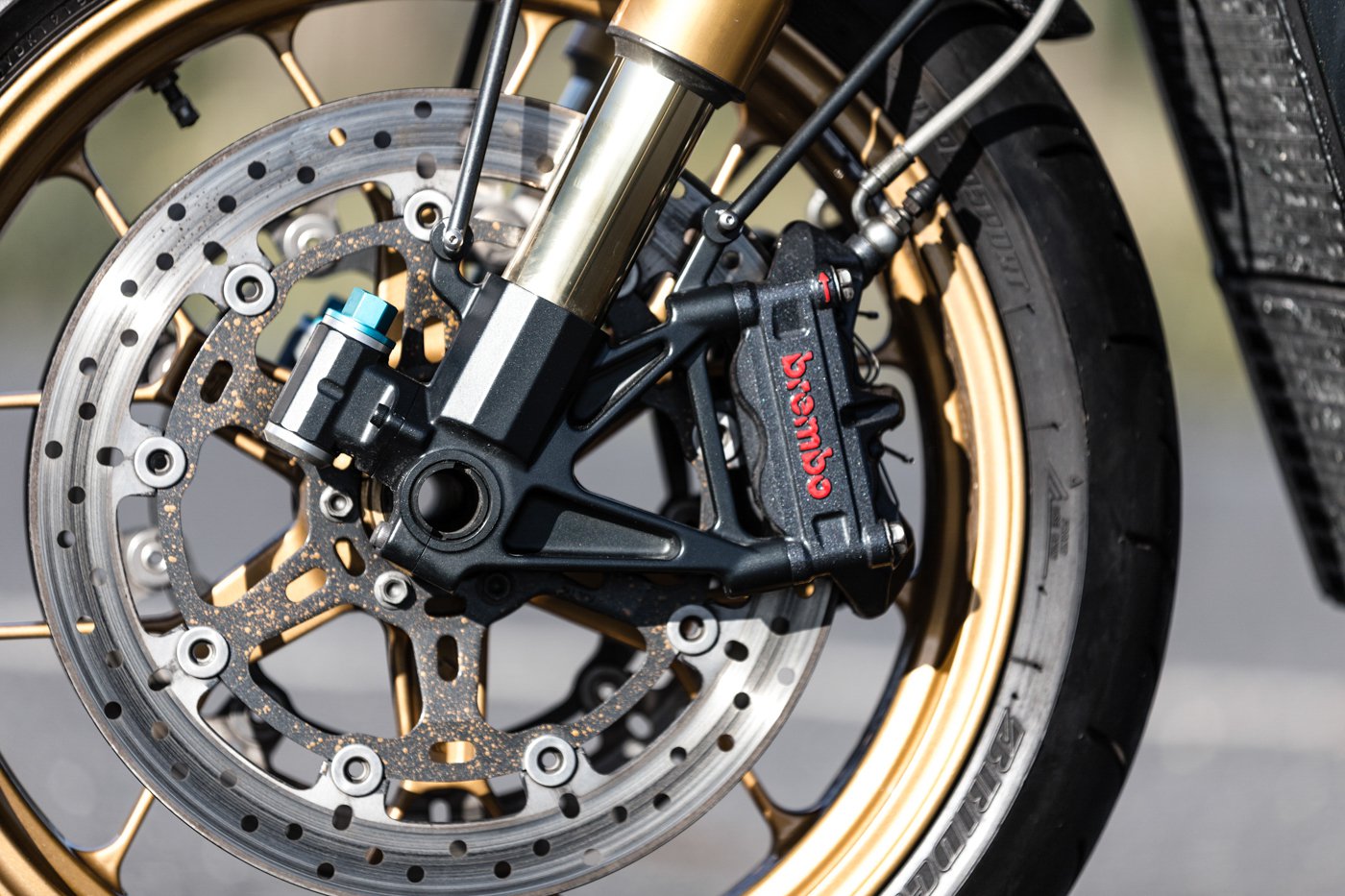 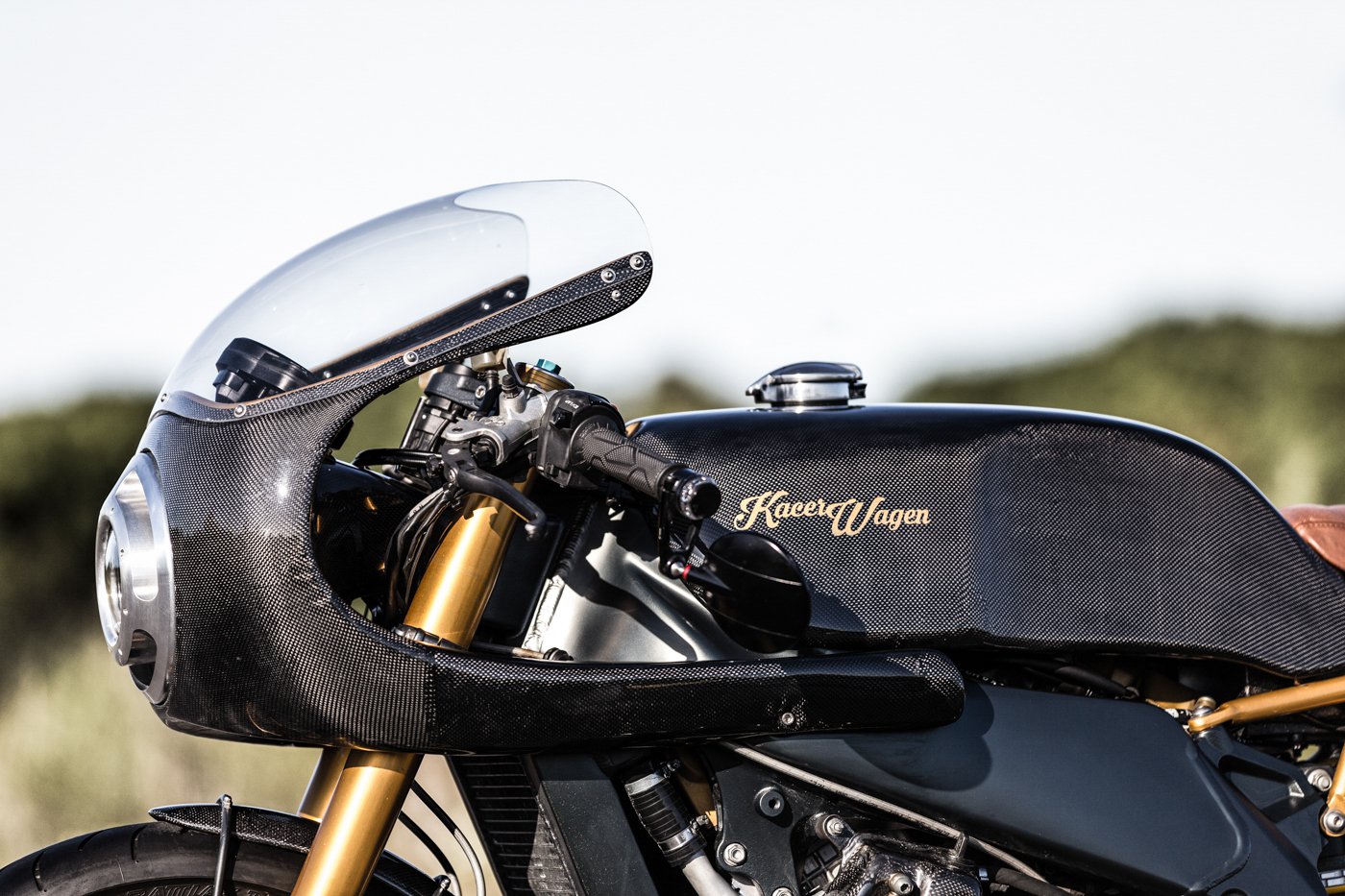 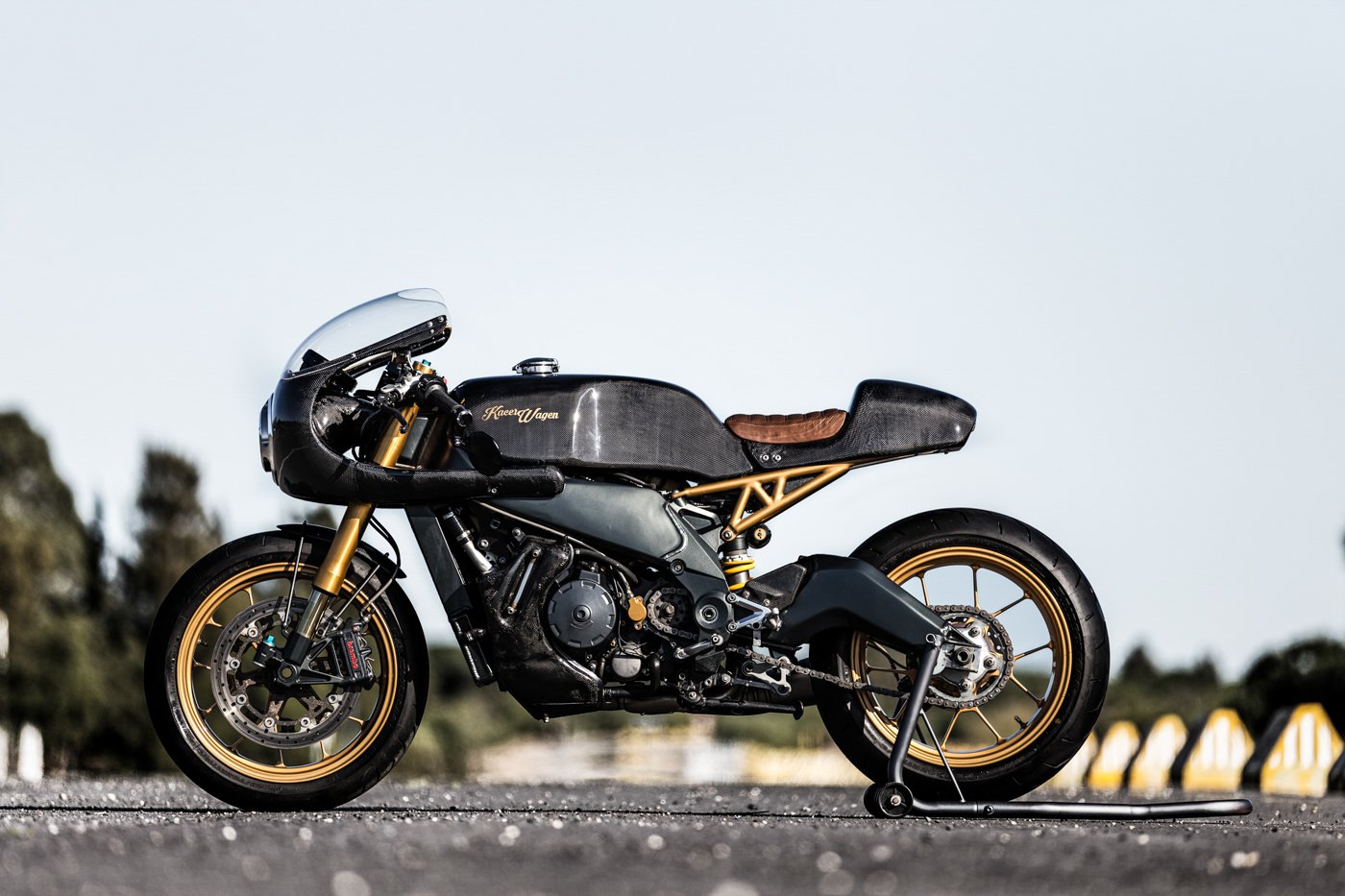