The weekend before last, I was lucky enough to spend some time in Las Vegas, Nevada to watch one of the the biggest off-road races in the world, The Mint 400. True to it’s name, the race is 400 miles long and starts early Saturday morning out in the desert near Primm, Nevada where hundreds of trucks, jeeps, buggies, and of course the main attraction trophy trucks, line up to spend the better part of day blasting through the hot desert. As hard as I might try, it will be very difficult to find the words that will properly describe seeing these two ton full sized trucks with 800-1000 hp come flying by at speeds well over 100mph. Especially when you consider the terrain. We’re talking about a rutted, bumpy, rocky mess where you would be lucky to hit 25mph in a regular truck without it breaking in half.

Aside from seeing these million dollar trophy trucks smashing through the desert at breakneck speeds, one of the best parts about the Mint 400 is all the events that take place a couple days before the race. On Friday, the city of Las Vegas closes off a few blocks Downtown just east of Freemont Street where all the competing vehicles line up and roll through the vendor booths, and the public is able to walk around and meet their favorite drivers and see the race vehicles up close and personal. No other form of racing can the everyday fan get such a hands-on experience as they do at the the desert racing events. I was able to get a real close look at Ballistic BJ Baldwin’s truck and even meet the man himself, shake his hand and tell him that he has one of the best jobs in the world and wish him good luck. He laughed, said thank you, and then kept on walking.

Although I wasn’t there for it, I was told that Thursday is one of the better days to show up because that’s when they do the time trials that are held on a short 7-10 mile course. This is supposed to be the best time to watch because the drivers are qualifying for starting positions so it’s here that they drive their vehicles the hardest. Not only are start times incredibly important due to the amount of dust & debris they have to deal with but during qualifying there is less worry about breaking something because they still have time to fix it if they do. On race day however, the drivers will be a little more cautious trying to make sure their vehicle can survive for the entire 400 mile race, so they take it easy, at least maybe a little bit.

There are so many classes in off-road racing and it’s fun to watch is they’re all out on the course at the same time. Well, let me rephrase that. The limited vehicles all run together in the morning and as they’re close to finishing, the unlimited vehicles are all let loose later in the afternoon. Everything from RZR’s that have been modified into the $100,000 range to the semi-stock Jeepspeed classes and all sorts of cool off-road vehicles in-between. Then there are a few different levels of the “Trophy Truck” class but the main ones are the 6100 series trucks and of course the unlimited class. Trick Trucks and Class 1 buggies. The three most exciting classes to watch in my opinion are first; the 6100 trucks, which if I understand correctly are basically a “limited” version of the trick trucks with strict power requirement. The second would have to be the Class 1 buggies. These things are pretty badass, full unlimited rear-mounted V8 motors and a whole lot of suspension travel. Justin Lofton actually competed as a Class 1 driver in the 2014 Mint 400 and he was able to catch and even beat many unlimited trucks in that race. Of course, the unlimited trick trucks are the main attraction. Over 36 inches of suspension travel, 140+mph capable, absolutely badass trucks that just fly through the desert and don’t let anything stop them or get in their way.

When I first made plans to attend the race, I wondered how fun it would actually be for a spectator with the race this long. I didn’t know how much action there would be. But boy was I wrong. The way they’ve designed the spectator sections is brilliant and there are multiple different places that you can go watch the race from. The start/finish line in Primm is a great spot, but we chose to go straight to the quarry instead. Within 5 minutes of being there, I already knew I was in for an amazing day. From were we stood you could see the racers at multiple different points as they wind through the turns of a somewhat slower section of the course until they hit a big horseshoe shaped turn where they went right in front of us.. I should probably mention that you should make sure to bring goggles and a bandanna or some sort of dust mask because when the 800+hp vehicles come through this section of turns, you are going to be doused with dust. By the time we left, I actually felt and looked like the photographer in the movie, Fear and Loathing in Las Vegas, when he’s covered in dirt but with a huge smile on his face. If you haven’t seen the movie to get this reference, please do yourself a favor and sit down for an interesting cinematic experience. The entire movie is based on Hunter S. Thompson’s Mint 400 experience back in 1971 and he was quoted as saying “The Mint 400 is a far, far better thing than the Super Bowl, the Kentucky Derby and the Lower Oakland Roller Derby Finals all rolled into one. This race attracts a very special breed.” 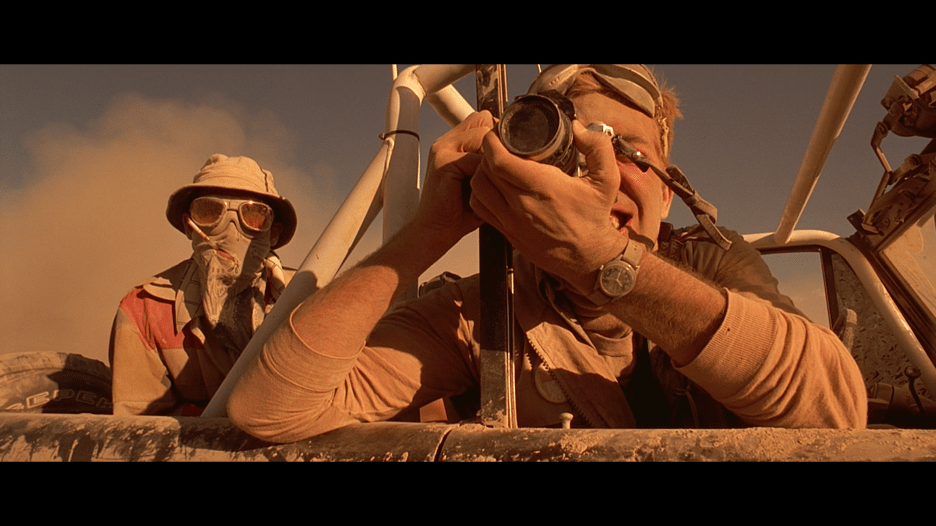 6100 Series Truck by Brenthal Industries on a high speed flyby

One of the coolest experiences about watching the action is that you always knew when the race leaders from the trophy truck class were about to come through because you could see the helicopters coming in the distance chasing them. Then you could see the huge dust clouds and could easily tell there were quite a bit bigger then when the other vehicles are coming in. Sure enough, one by one Rob MacCachren, Bj Baldwin, Bryce Menzies, Justin Lofton, and all the biggest names in off-road racing come smashing through and almost every single one of them has a helicopter chasing them. But interestingly enough, I found out that it’s against the rules for the helicopter to give the driver any information so it’s mainly for safety and filming purposes.

After a couple hours watching at the quarry and seeing the big guys come through on their second lap, we decided to change it up and head over to one of the high speed sections. In the quarry, you see them for a pretty good amount of time because they aren’t going terribly fast as they wind through the turns, but on a long straightaway so you see them absolutely hauling so much ass over terrain that you wouldn’t think is possible at the speeds these guys are going, at least 100 mph or more, so it’s a very brief sighting, but so worth it to see this. The scale of this whole race is just huge, way off in the distance you could see dust clouds appearing out of nowhere that almost resemble the contrails that you see airplanes leaving in the sky. Knowing that each time Justin Lofton went by he had traveled almost 135 miles before we saw him last just blew my mind. It may seem like a long time but it happens a lot sooner than you’d think. Technically you only get to see each racer go by three times but that doesn’t mean there is ever a break in the action. With Literally hundreds of vehicles on the course there is almost always someone coming by constantly.

As the sun started going down you could see lights flickering all over the horizon as the remaining competitors continued to grind out the final laps of the race in the dark, and it would continue to look like that well into the night with some racers not finishing till past midnight due to complications out in the middle of nowhere. But after we saw the race leaders go by on their final lap, it started to get dark enough that we couldn’t tell who or what vehicle was going anymore. But let me tell you, these guys running at night had balls of steel and sheer determination to finish that race no matter what or how dark it was outside. We saw more then one truck come by that hardly had any of their lights working anymore and one even looked as it if the co-driver was guiding it by a hand-held flashlight.

It was at this point that we decided to pack it up, the thought of a shower never sounded more appealing, and with that it concludes my first Mint 400. But I can tell you right now I don’t think I will ever miss another one. Only next year I will be much better prepared with things like goggles, dust mask, binoculars and a comfy chair. If you have any interest in off-road racing, or even if you don’t, please put the mint 400 on your bucket list because it is downright amazing. The whole experience of it all is something every gearhead should witness, plus your in Vegas so you can get up to all kinds of other shenanigans after the racing is over if that’s your thing! Its a win-win!

The entire race is 400 miles with the course itself consisting of about a 135 mile long lap and the drivers in the unlimited classed race three laps. The winner of the 2016 Mint 400 was Justin Lofton and he finished the race in about 5 hrs and 30 minutes. Barely beating second place finisher, Andy McMillin, be a mere 42 seconds which is next to nothing on this type of race.

Cameron Steele Fly by at over 100MPH