It really is amazing how far we have come in 70-years. Just looking at where Ducati has come from in that time is enough to blow your mind. I mean, they just release a V4 engine that produces 205hp with ease, and yet it all started with a humble 49cc engine strapped to a bicycle frame. But what is even more impressive, that 49cc engine is cooler now than it ever was back then.

It’s called the Cucciolo, and it’s Italian for ‘puppy’. This was attributed to the bikes small nature, as well as it’s high-pitched ‘bark’ coming from it’s punny exhaust. Manufactured after WWII, the Cucciolo engine had a 12-year run from 1946 until 1958. The engine was thought up by Aldo Farinelli, while it was built by a self-taught engineer, Aldo Leoni. While it isn’t by any means a powerhouse, the engine was capable of a 40mph top speed while maintaining a 180-miles-per-gallon fuel efficiency. Talk about the ultimate commuter.

This particular example is built by non-other than Tony Prust of Analog Motorcycles. With a slew of custom Ducati’s under his belt, this project was one that took years to transpire. The owner of the Cucciolo is Michigan based Del Thomas, a man of fine taste. Del is a Ducati collector, with Tony saying, “Del pretty much has a model from every decade, except the 1950s.” Now he can finally check that off his list.

Tony tell’s the story of how Del acquired the Cucciolo engine and subsequent Iver Johnson bike frame. “Over the course of our friendship, he’s commandeered a few Cucciolo engines to complete six decades of Ducatis’. He also found a prewar 1930s Iver Johnson bicycle frame, a modern front fork set up, and a cool vintage Ideale leather seat.” He then mocked up a board-tracker design and promptly dropped it off at Analog for its transformation. Because Analog is one of the busier shops in town, it took a while for the bike to make it into the stand. But when it did, the design challenge was on.

The first step was re-finishing the frame. Tony Media blasted it, taking it down to bare metal where they could see that father time had not been too kind. Extensive repairs were done to bring the frame back to life, but these left scars throughout the metal. Because there is no lack of creativity at Tony’s shop they jumped this hurdle with class. “We painted it a Kingfisher Blue, a Ducati color from the 1960s Monza. It would give a little nod to Ducati’s heritage, and match well with the metal, brass, and leather,” Says Tony, outlining his perfect solution.

From there it was time to mount the goods. The engine required custom spacers as well as a modified crankset to make everything jive. A custom hand-shifter was made, a common high-end accessory back in the Cucciolo’s heyday. They also fit the bike with modern controls, featuring a Biltwell Whiskey twist throttle and modern levers for clutch and brakes. Because this is half bicycle half motorcycle, they had the brakes linked for one-lever operation. Tony then hand built a broad-tracker style tank, with custom leather straps to keep it in place. It’s a beautiful touch that clearly distinguishes the bike.

Style-wise ‘Little Puppy’ is out of this world. It features a slew of beautiful leather work, as well as brass, aluminum and steel accents. The bike also has beautiful LED lights built in, giving it a practical update. The tank is finished in bare aluminum, with Jason at Artistimo Custom Design painting an original Cucciolo ‘puppy’ logo on each side. The addition of the leather tooled seat tube bag and brown tires add a beautiful contrast to the Kingfisher Blue finish, with just enough bare metal to keep things interesting. While it’s a shame this bike will be destined to a life in the garage, I can’t help but think how fun it would be to cruise around Italy on such a machine. It may be one of Ducati’s first engines, but it is still great some 70-years later, ‘Little Puppy’ is proof of just that. 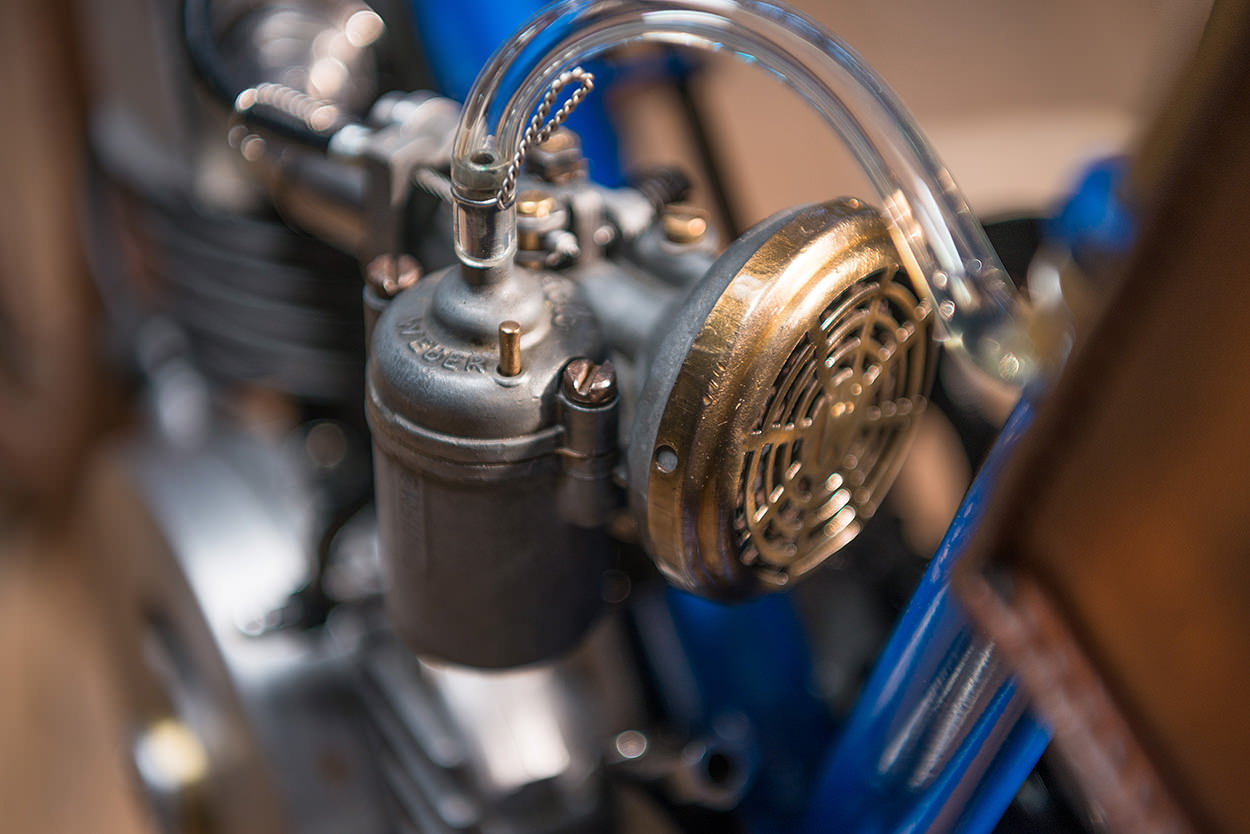 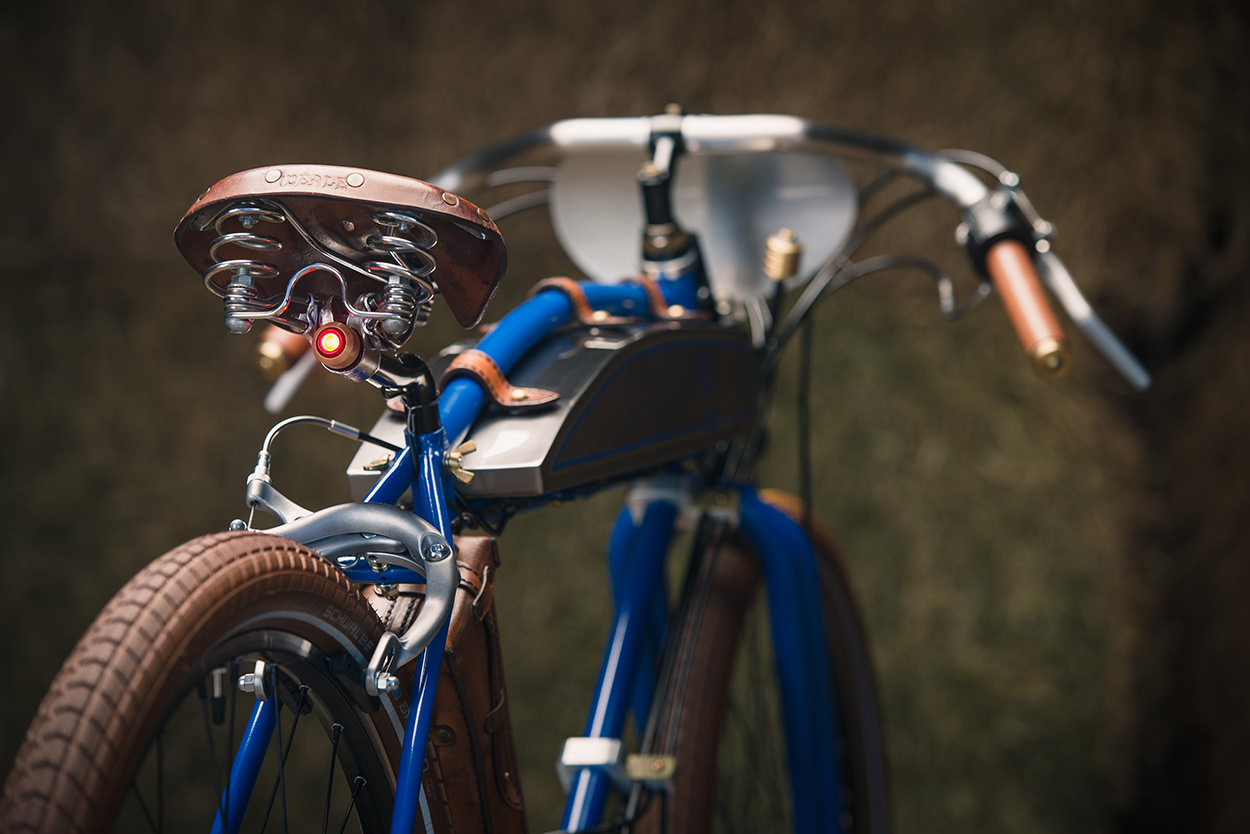 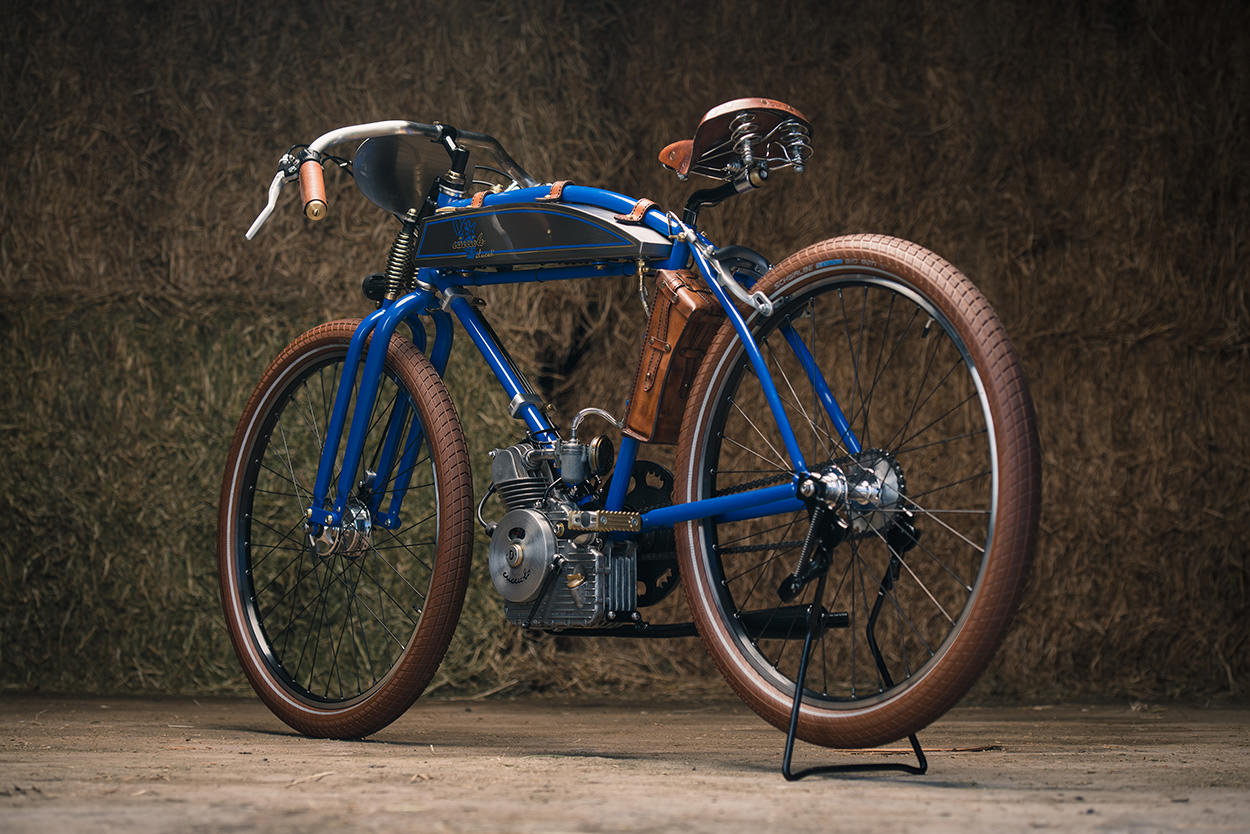