Making your name in the custom motorcycle scene is equally as challenging as say, becoming a musician, or a full-time artist. It’s possible, but the road is very long and quite crooked. For Calum Pryce-Tydd of DeBlox Engineering, the road could have gone nowhere and he still would have taken it. And we are thankful he did.

Calum first broke onto the scene with a slew of custom CB750’s. While they were breathtaking, it would have been easy to call the young Englishman a one trick pony, relegating his skills to a single style. That would have been a massive mistake. Knowing well and good that he had an opportunity to really showcase his skills, Calum took to building the Ducati 749S of our dreams, aptly named the Ducati 749 Super café.

From 2003 until 2006 the 749 and 999 where Ducati’s go to machines for sportbike enthusiasts. The machines were a drastic departure from one of the most loved bikes of our time, the Ducati 998, and respective 748 variations. While we feel they were undervalued at the time, the 749 & 999 machines are seemingly experiencing a resurrection, thanks to the custom crowd. This particular model used is the highly spec’d 749S, which is the only model that shared unique features like adjustable rake and multiple riding positions. All from the factory, I might add.

A good majority of custom builds start with a customer and a very basic bike. This build on the other hand,
started with a simple proposition; build me a bike, and make it Italian. And that is literally it. With a world of possibilities, Calum got searching for a donor machine, finding this low mileage 749S in the process. Once the bike back at the DeBolex HQ he started taking it down to the frame, picturing the final product in the process. Calum is the ‘outside the box’ type of person through & through, which means he doesn’t go through the typical process of sketching his designs. He doesn’t even use some sort of CAD software, instead he get’s a vision in his head and works from there.

Now, it would be a crime to say this was all the work of Calum Pryce-Tydd. Although he is the driving force behind DeBolex, Des Francis contributed his fair share to the 749S. Francis is a renowned upholsterer and fabricator, lending his expertise to the build. It’s safe to say Francis had a challenging role in the build, thanks to Calum’s ‘internal creation’ thought process. Even still the two managed to work out perfectly the details of the Ducati, ending with a breathtaking modern Cafe.

If you exclude the custom formed exhaust and much-needed power commander, the Super Café is structurally a stock machine. DeBolex stripped the bike to its frame, where it became time to address the accessory items that needed to be hidden. Through the wonders of clever sheet metal work, DeBolex constructed a beautiful belly pan that solved all of their problems. With multiple compartments built inside, the belly pan houses the electronics on the left, the oil cooler front and center, and the exhaust through the right side. More importantly than that, it gives the machine quite an incredible appearance.

The sheet metal didn’t stop at the belly pan. The duo built every piece of bodywork from sheet metal, including the new tank. Becuase of the trellis frame design DeBolex had to get creative, constructing an ultra wide tank with gorgeous knee cutouts. This gave the Ducati a nice burly feel while keeping that Cafe essence alive. They then took that energy and constructed a beautiful matching tail section, which Francis finished with a gorgeous Alcantara seat.

Calums front fairing idea was radical, to say the least. He wanted something small yet bold and surely didn’t envision having a headlight at all involved. After talking to Gerald, the bike’s owner, he established a compromise. Simply put, ‘Don’t ride this bike at night, and I’ll make it gorgeous,’ to which Gerald happily agreed. DeBolex got to work, creating the beautiful nose fairing you see here. While the idea is that it looks simple, constructing sheet metal into this shape is a challenge for any skilled metal worker. The end result couldn’t be better, perfectly finishing the 749S’s Café transformation.

With the bodywork complete it was time to have the bike painted. The pair couldn’t agree on a single color, which is likely for the better. Des greatly appreciated a shade of Porsche blue, while Calum had inspiration strike while attending Goodwood. A light grey GT40 ripped through the hill climb course, leaving Calum in awe with a new color in mind. The two combined their favorite picks, creating a two-tone paint job that works brilliantly. The Ermine white number placard upfront marks the completion of the build, housing the company logo in the process.

If Calum proved one thing with this build it’s that he isn’t a one-trick pony. Instead, he has easily secured a spot as one of the best up and coming builders out there. His teamwork with Des Francis is brilliant, and we hope to see their next project very soon. 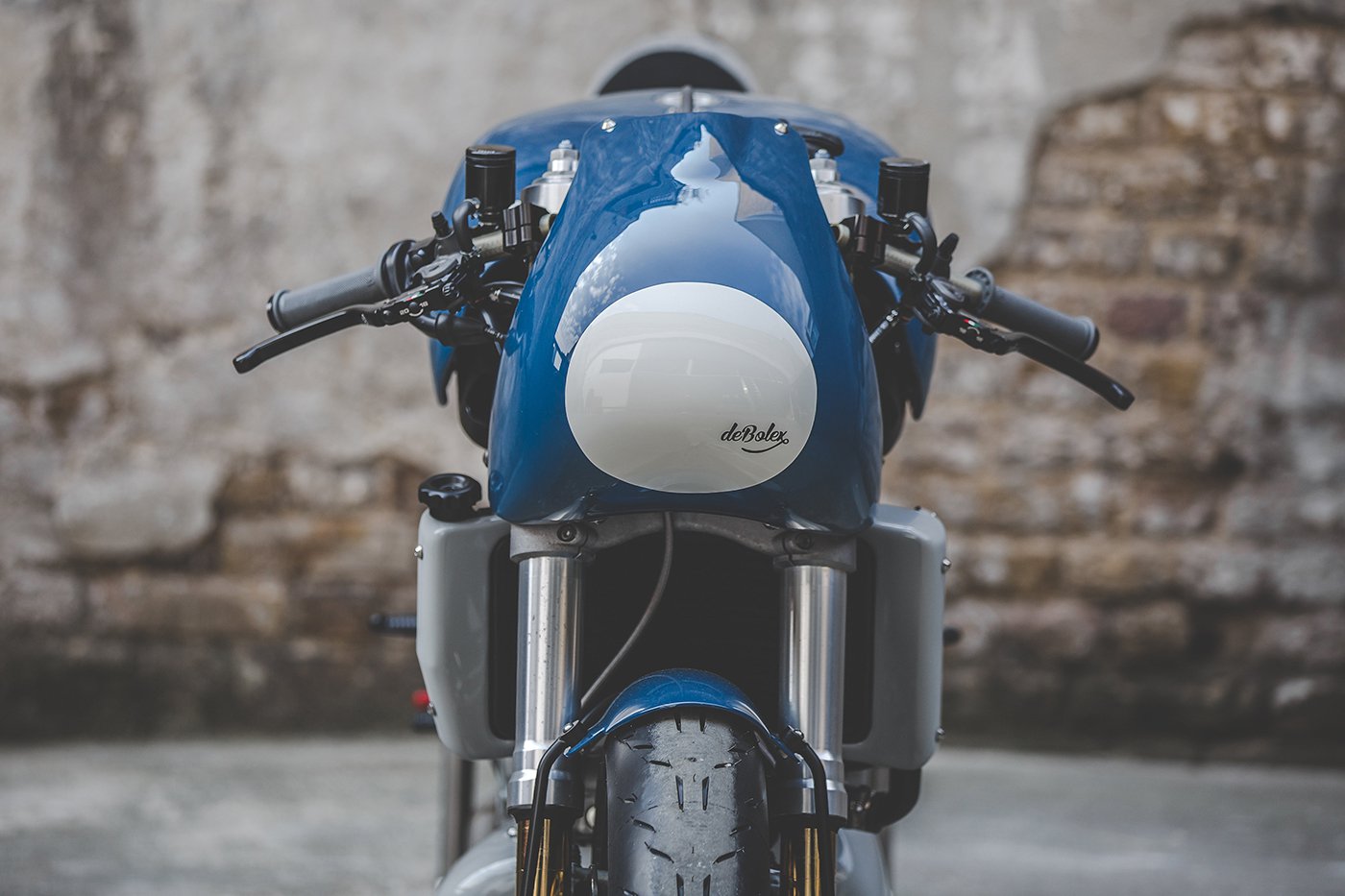 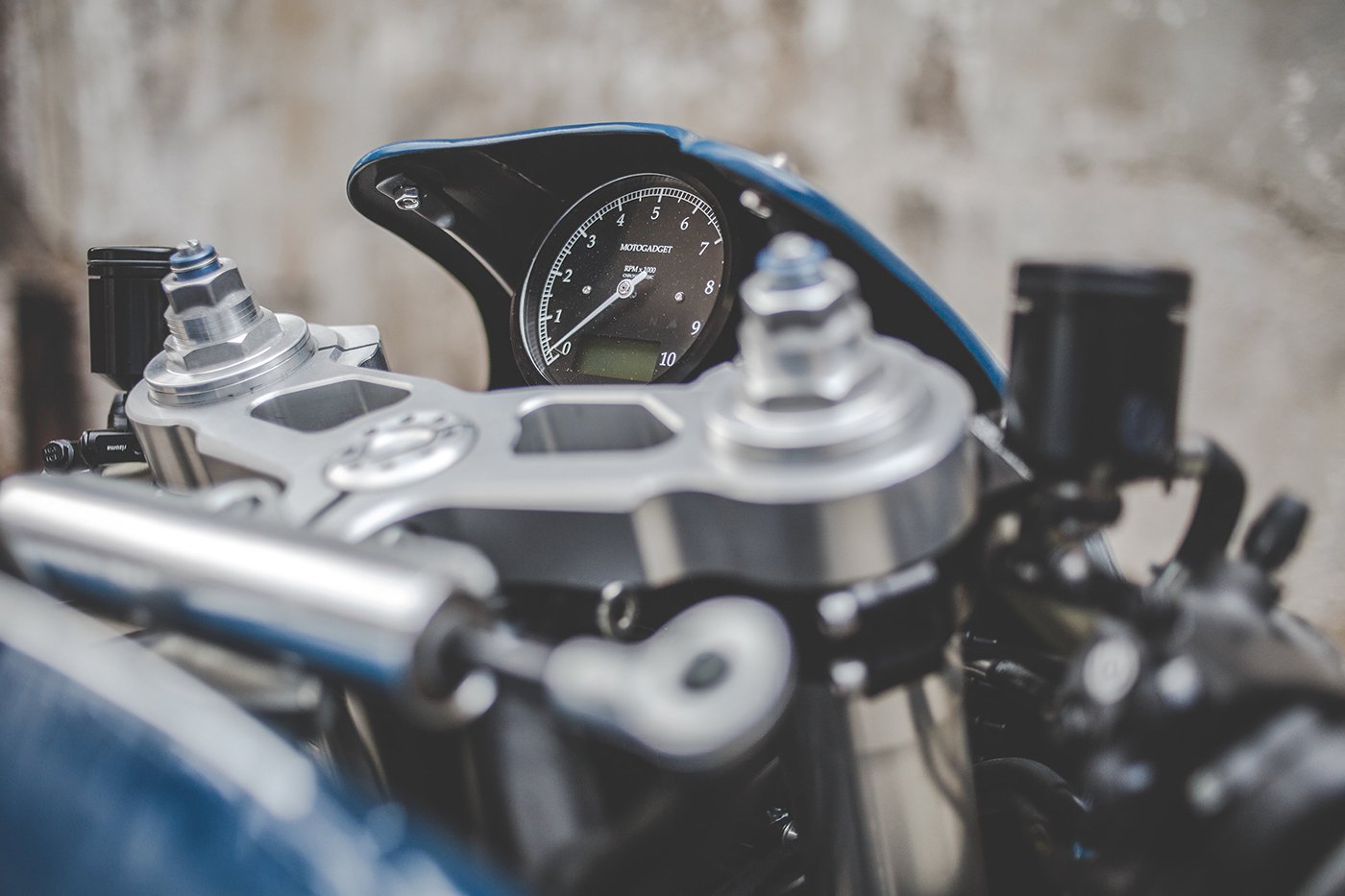 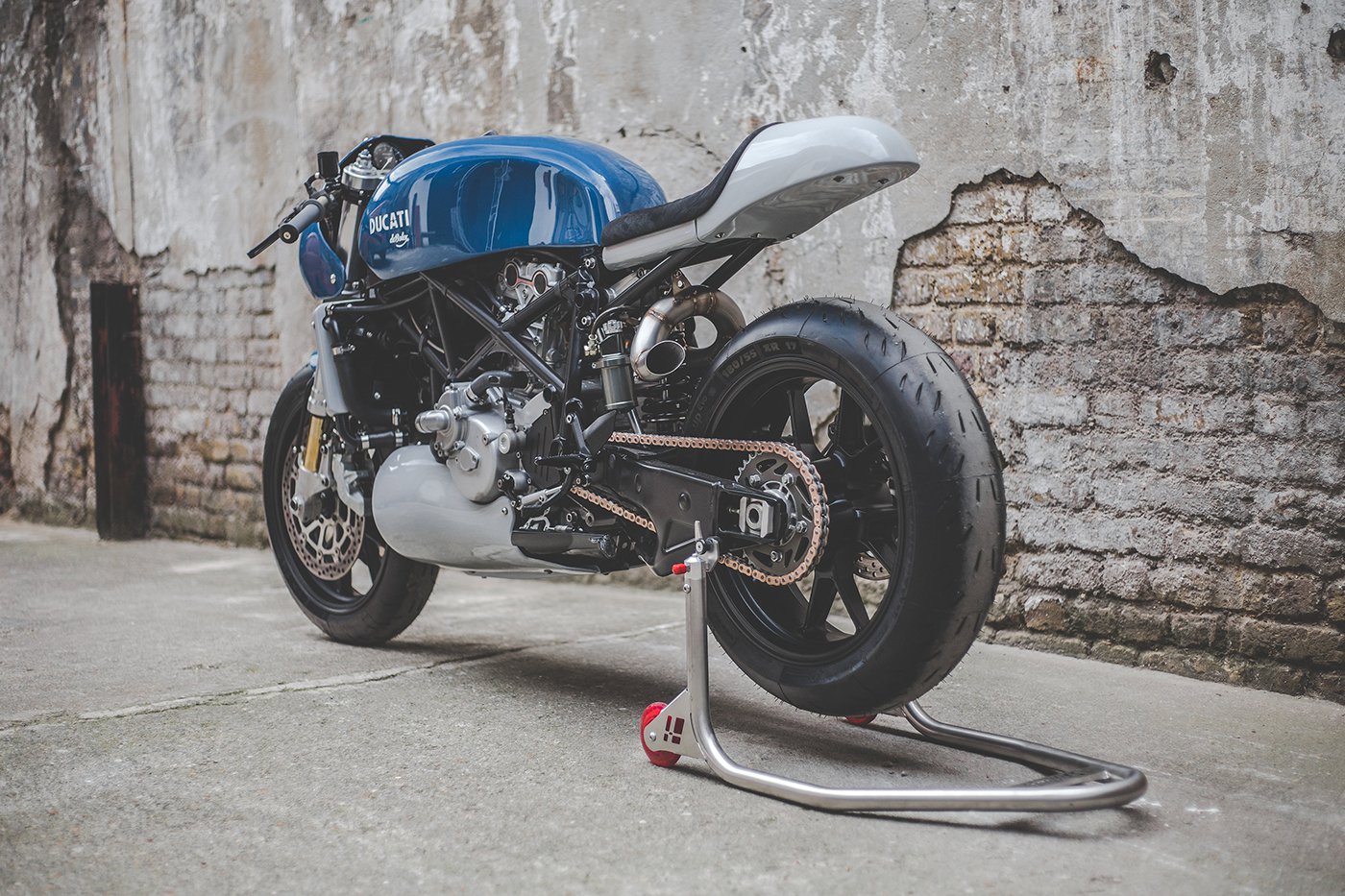 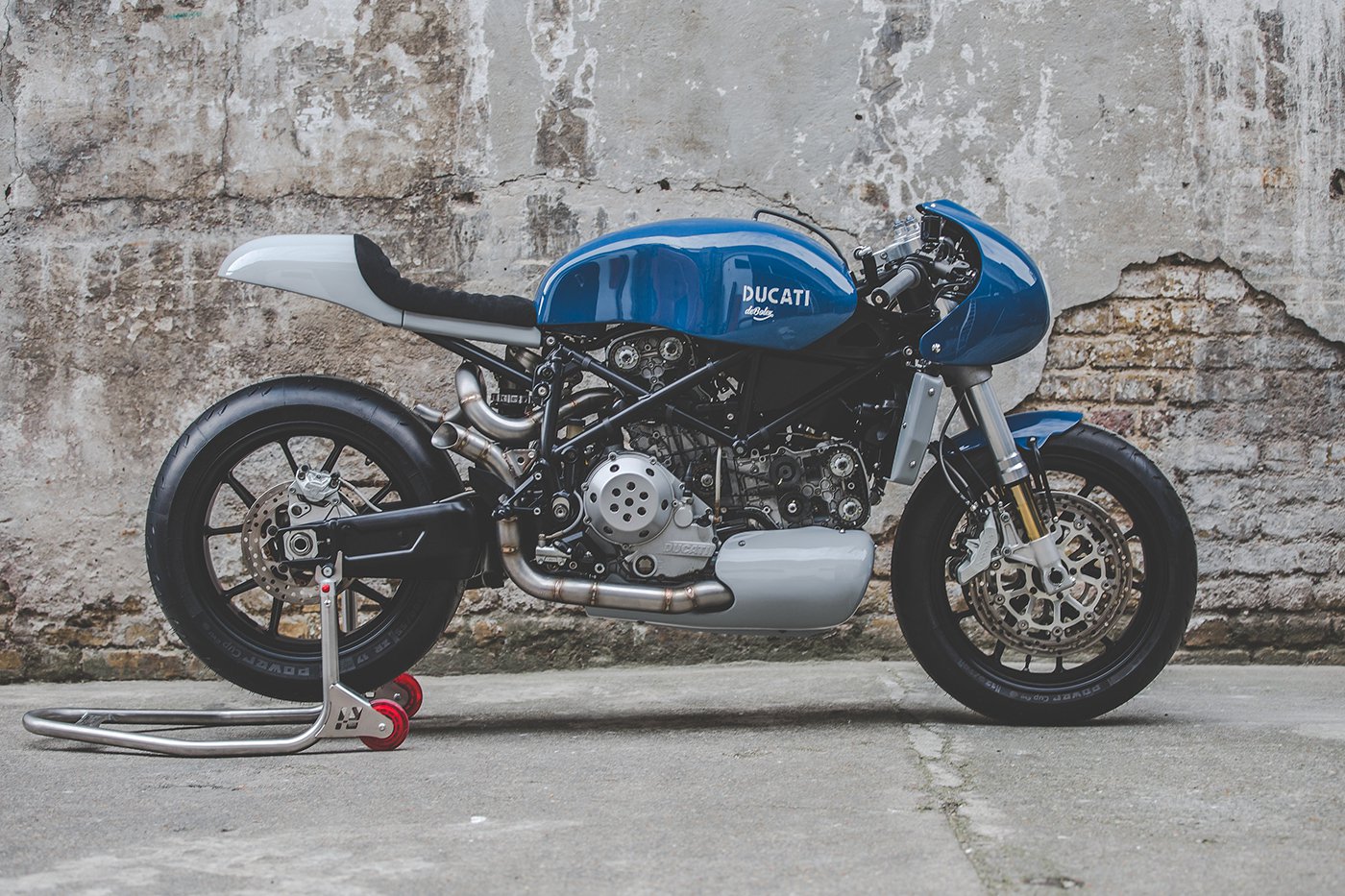 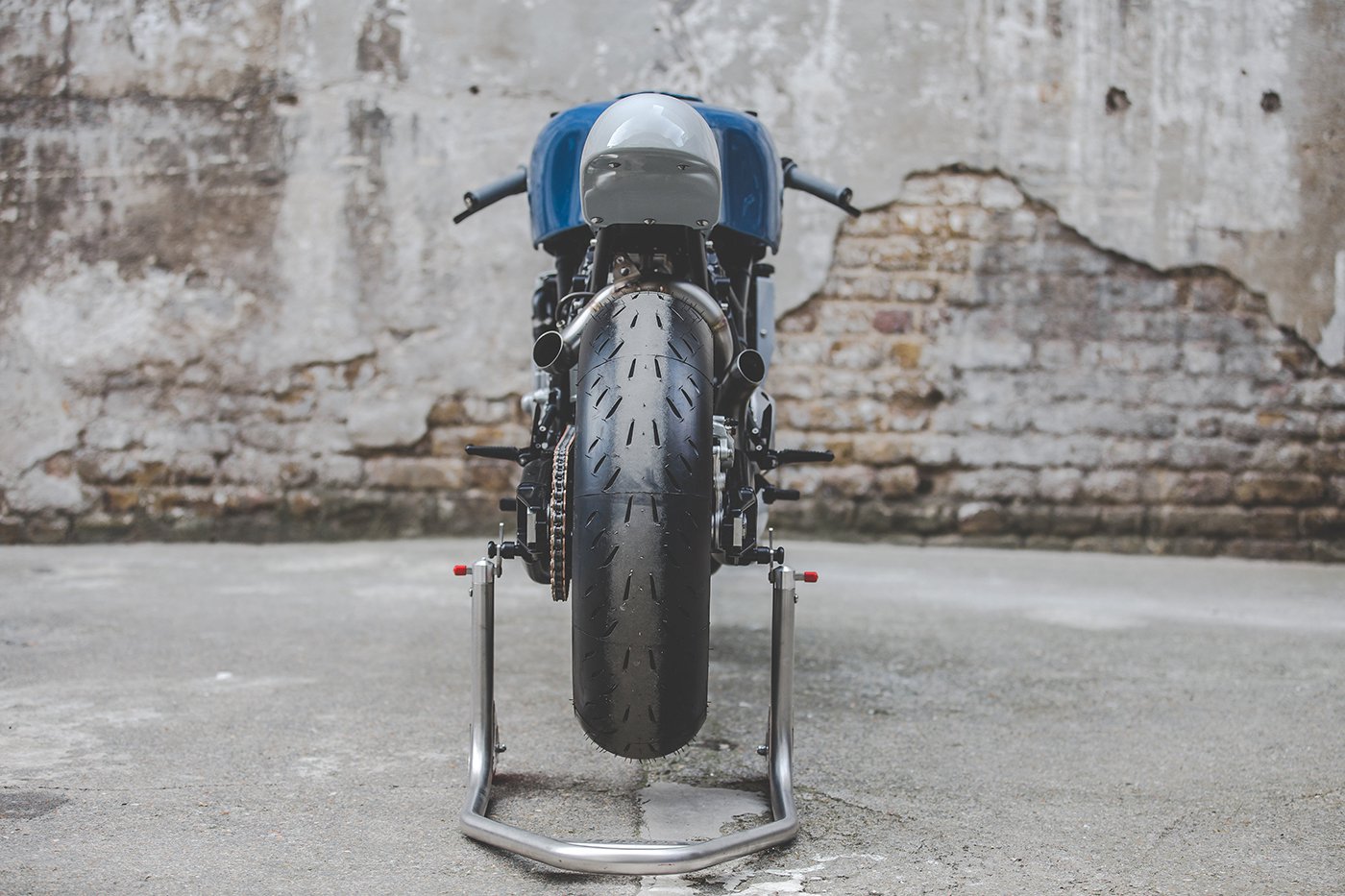 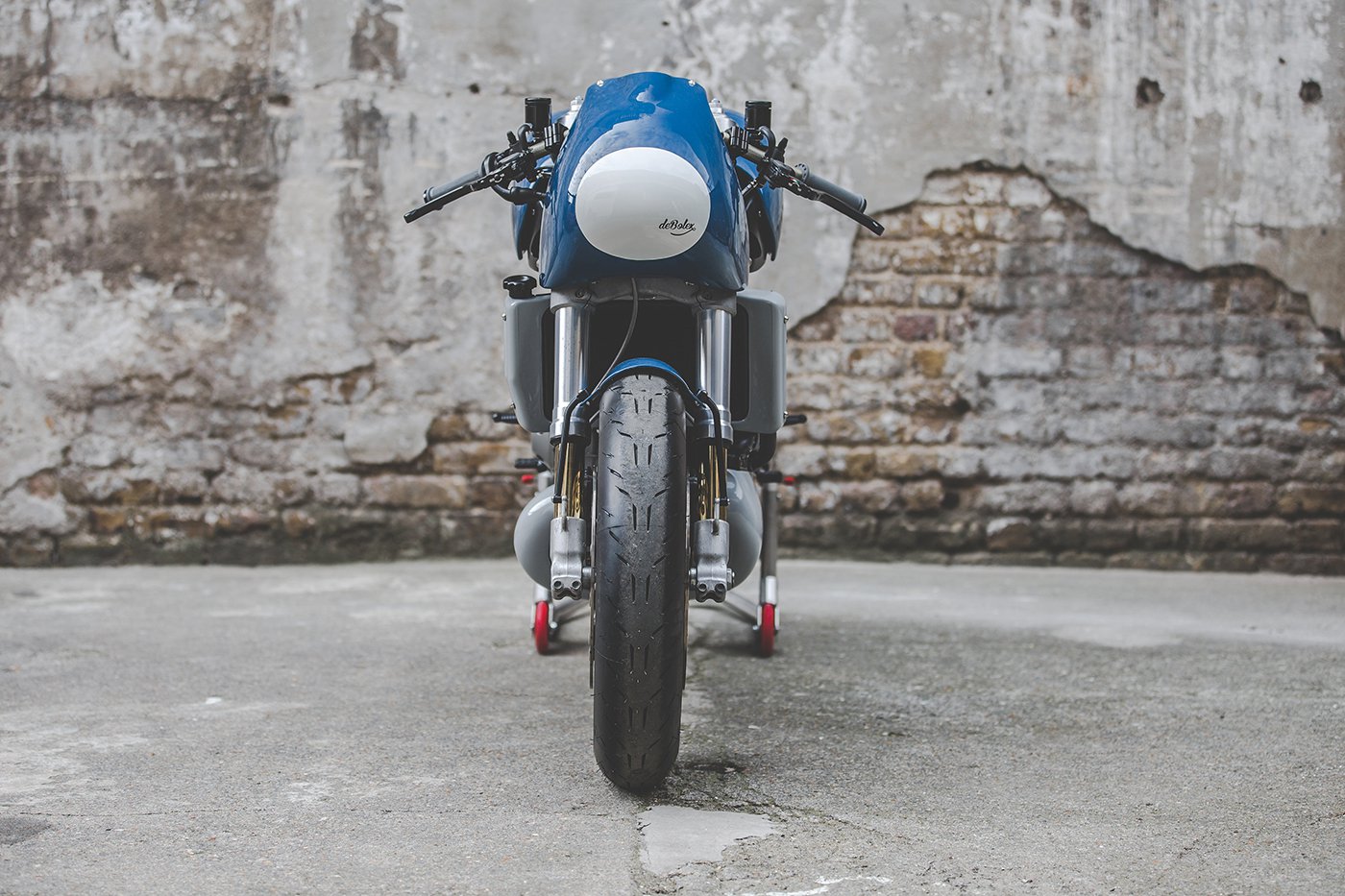 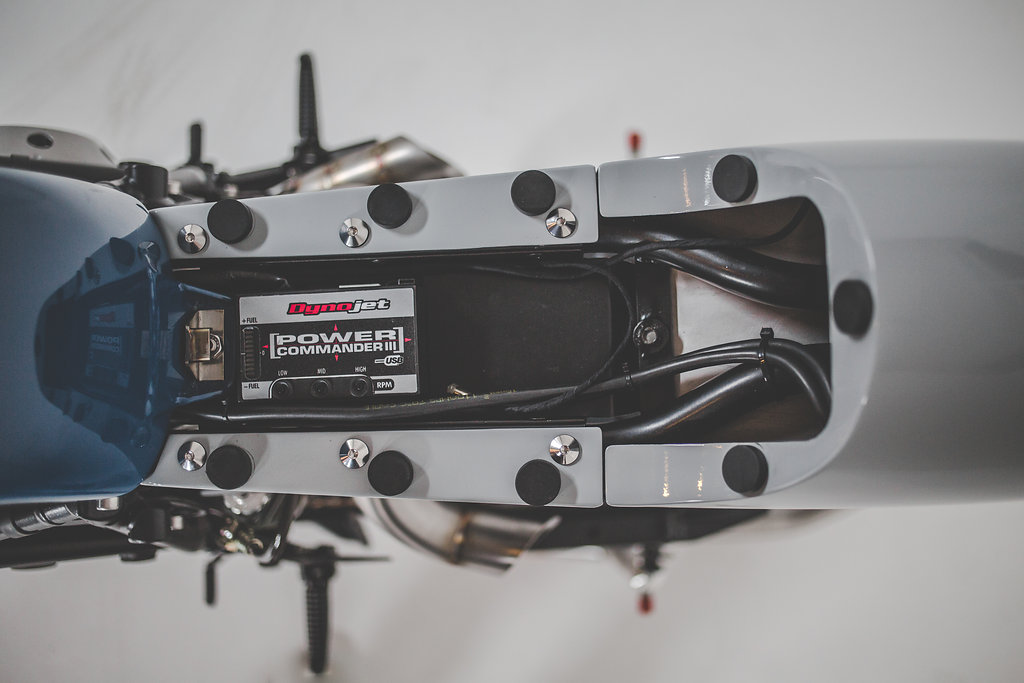 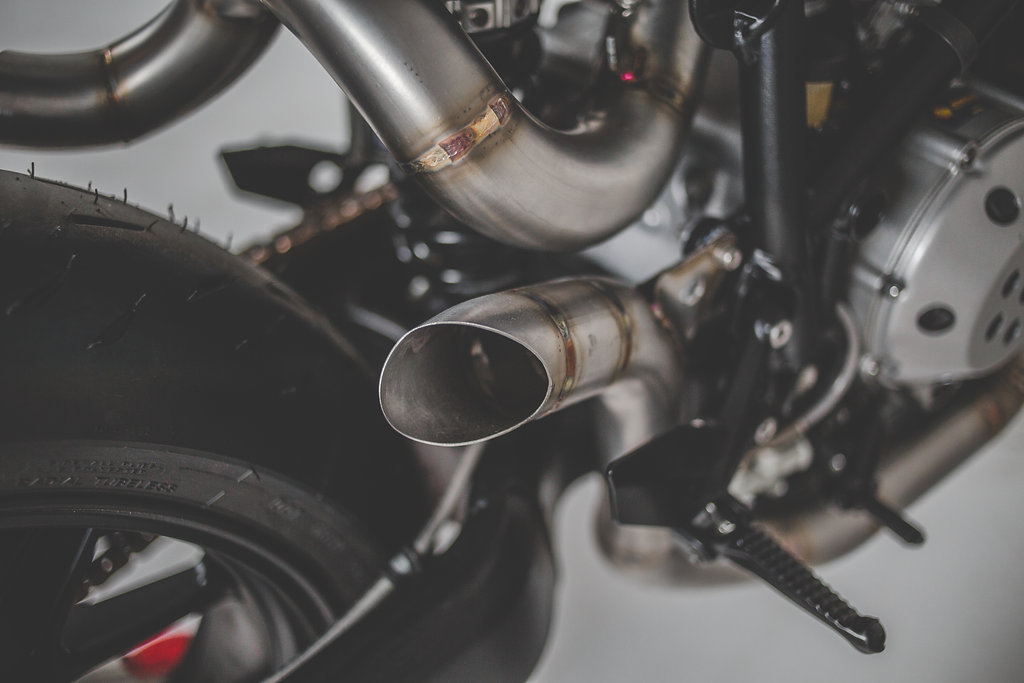 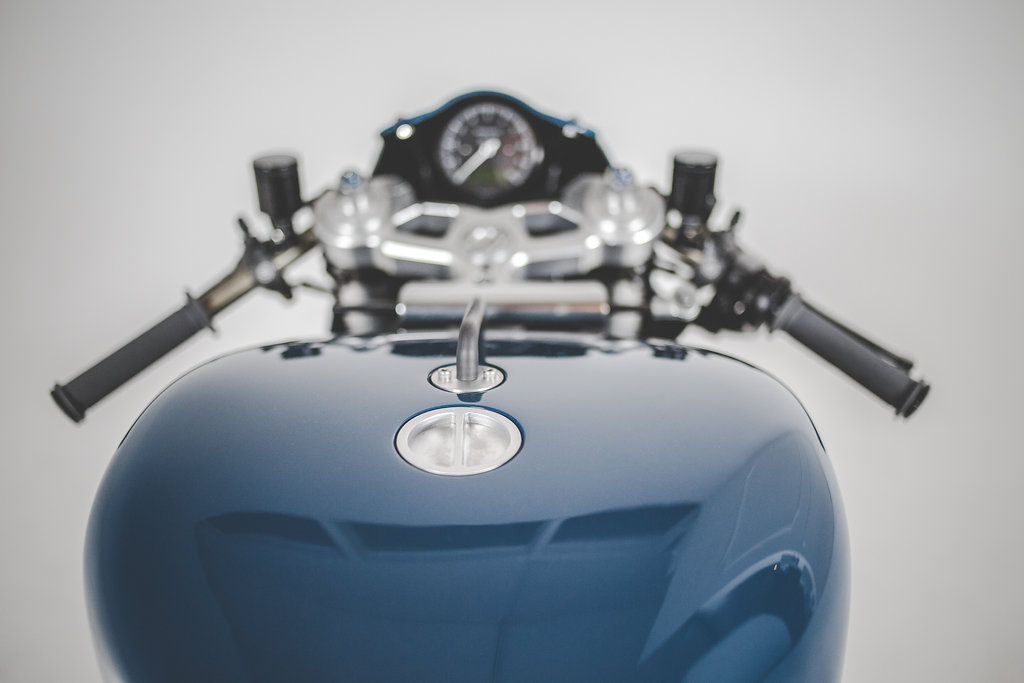 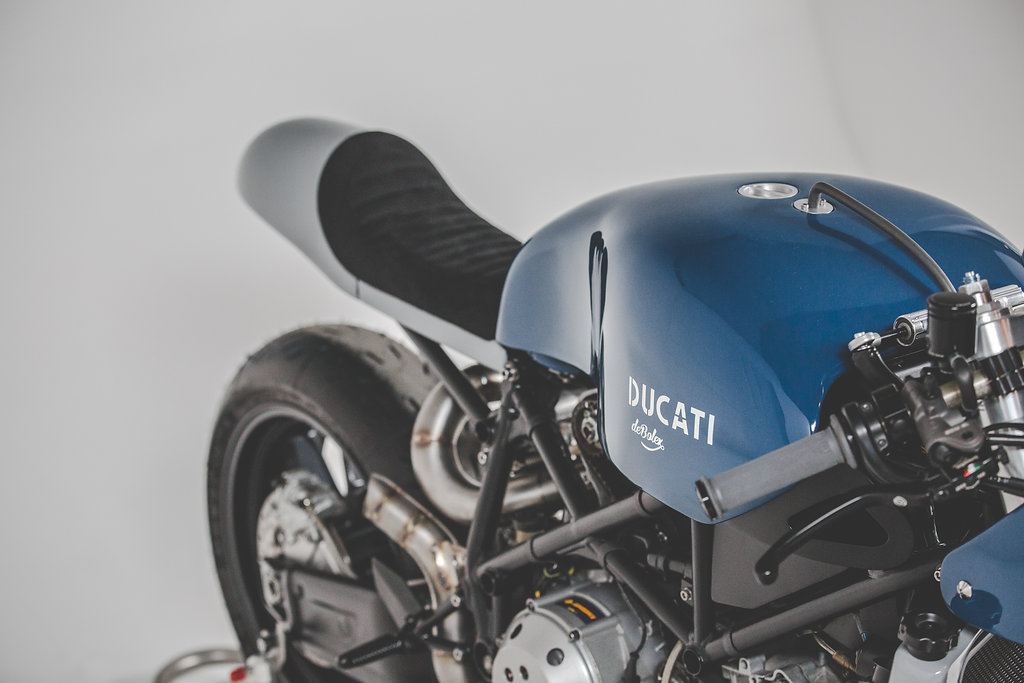 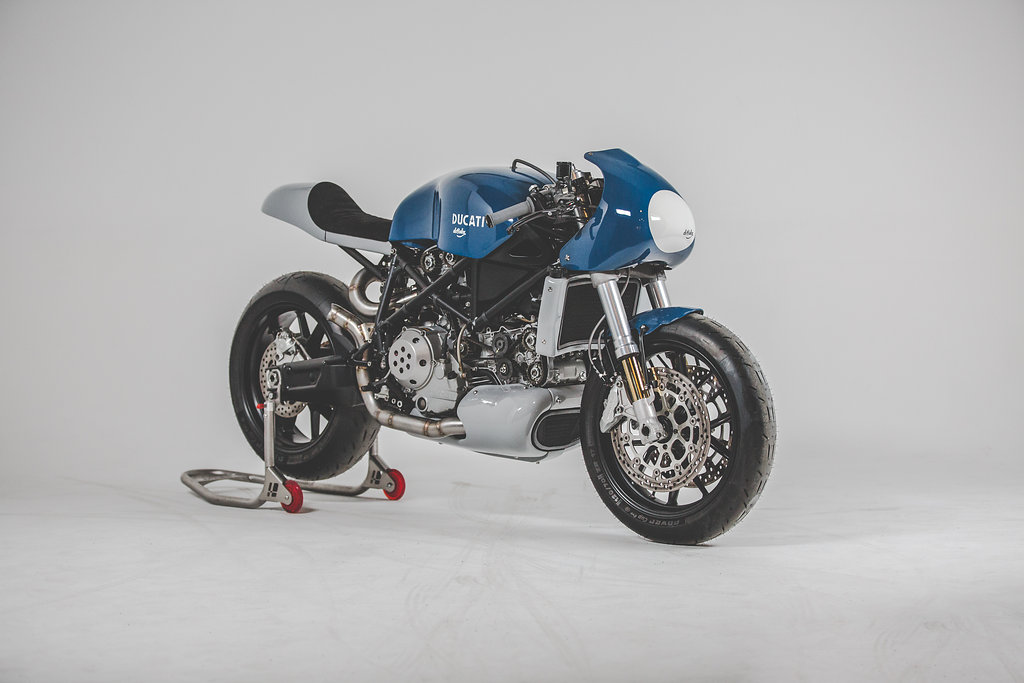 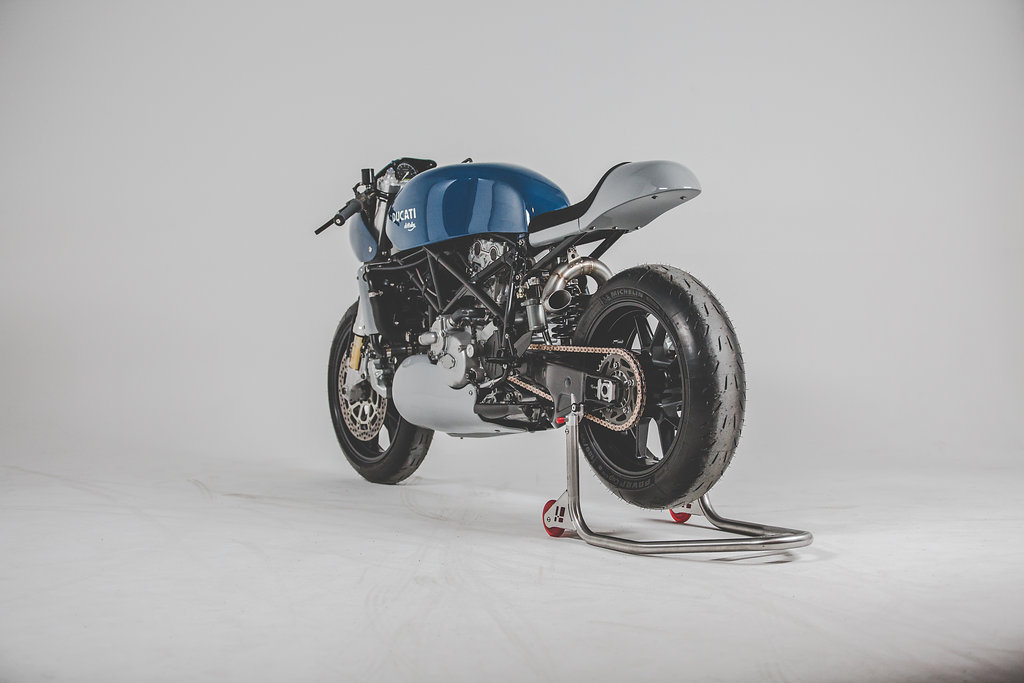 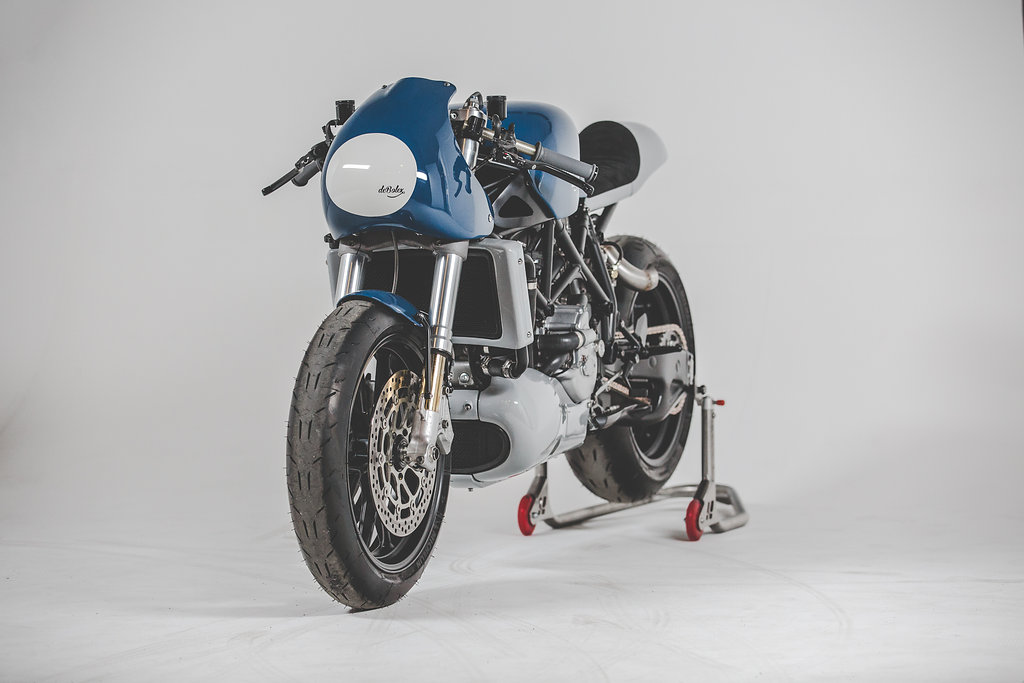 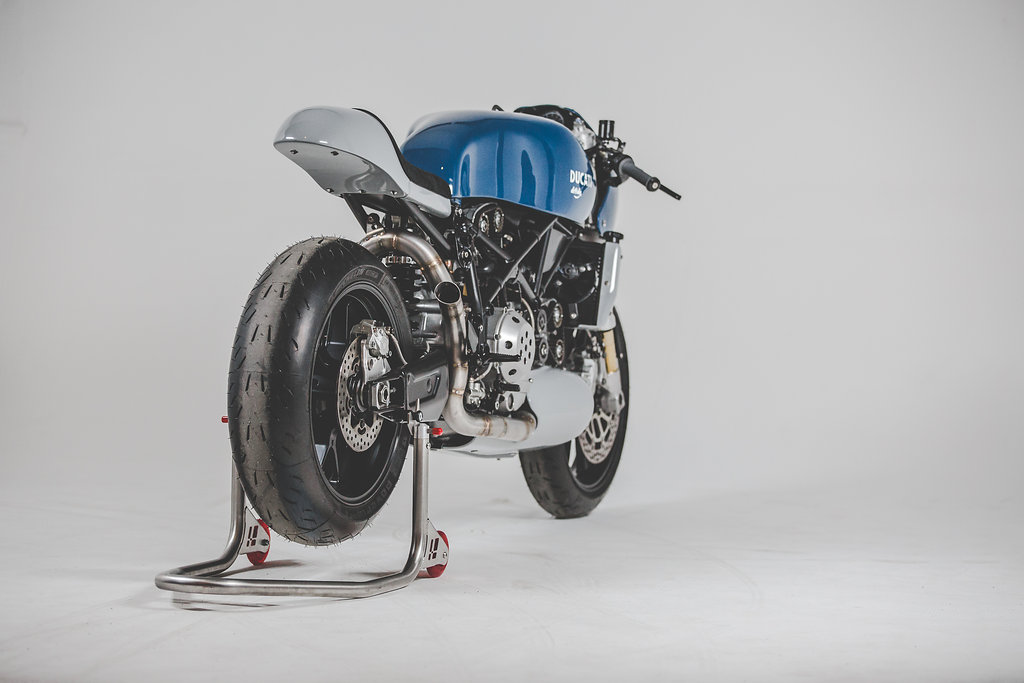 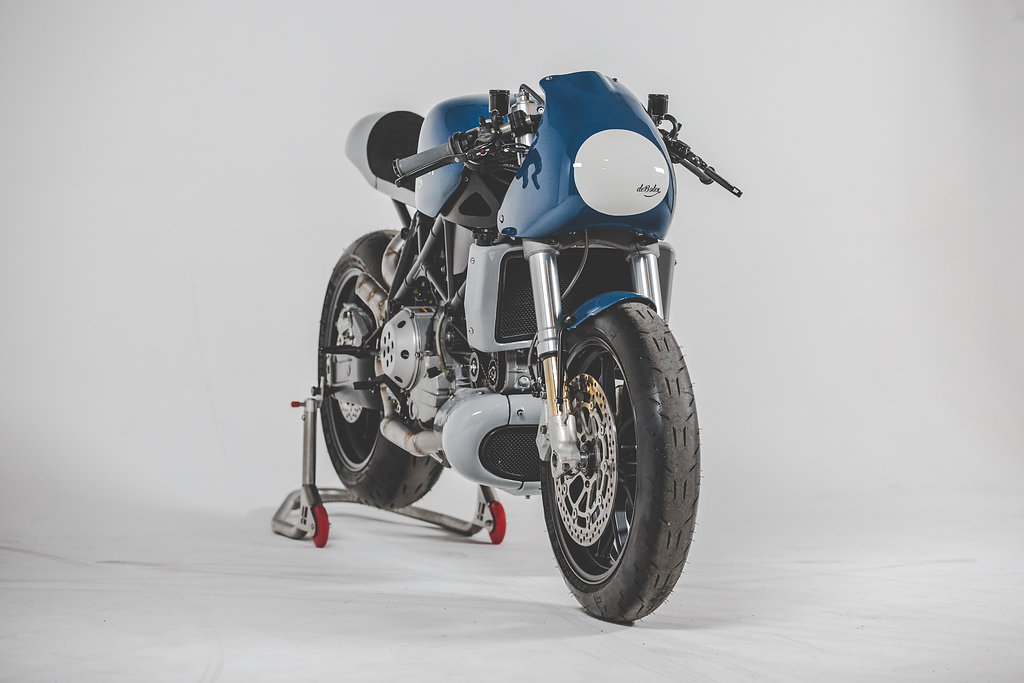 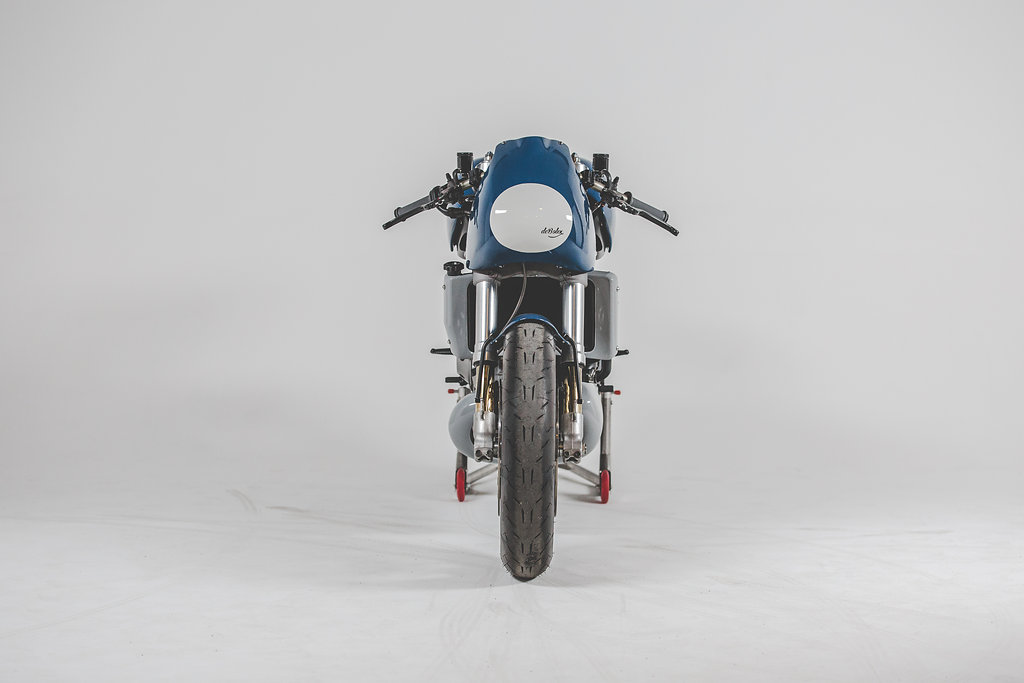 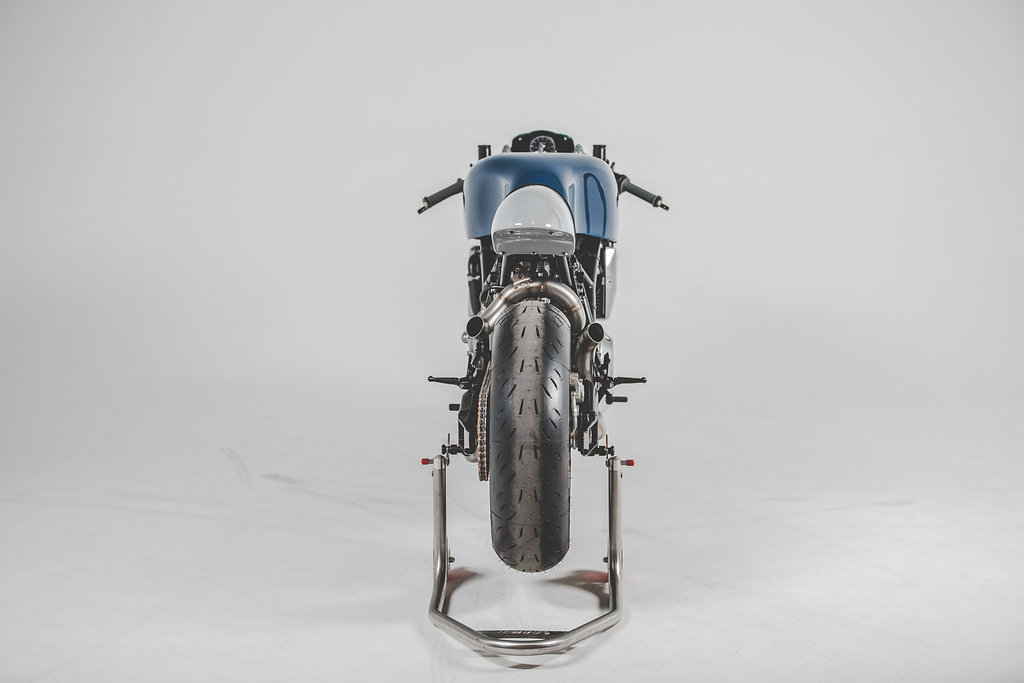