In a country that has one of the highest motorcycle rider per capita rates in the world, it’s a little odd that we don’t see more custom motorcycle builders coming from that crop. India is one of those countries that relies heavily on motorcycles for commuting yet you rarely see headlines for custom builds like we do here in the states. J&D Custom Co. is here to break out of that mold.

J&D Custom Co. was established in 2014 by Jay D. Patel. Jay was an engineering student with a passion for custom motorcycles that burned so ferociously he couldn’t hide it anymore. He decided to drop out of his engineering program, and started working with his hands. Using his father’s engineering workshop, Jay purchased a 150cc Pulsar motorcycle and got to work designing and building his very first custom motorcycle. The end result was a small cc bobber that was a little rough around the edges but for a first attempt, it wasn’t bad at all. And it showed his potential and passion from the beginning.

With more practice, Jay has honed his craft. Time and time again the bikes came out better than the last. Still using his father’s shop, Jay says, “Actually, I still build custom motorcycles at my father’s workshop, which is a proper setup with a lathe, drill machine and proper tools etc. I also built an English wheel for metal shaping which is helping me in a great way. I don’t have any workers or helpers, as I do all my work on my own. So it’s like a one-man show: from designing the bike, to fabrication, to welding – I do it all.”

The one man band approach seems to be working because his latest creation is absolutely sensational. Jay utilized a Royal Enfield Thunderbird engine, which is iconic in itself. The Royal Enfield name is well known around his neck of the woods and is often associated with India and its motorcycling scene.

While Royal Enfield was originally a British-based company it has become more and more associated with India. Royal Enfield’s journey into India started with their police force and has ended with an Indian based automotive company owning Royal Enfield. They’ve been manufactured in India since 1955, resulting in many people assuming they were an Indian based motorcycle all along. In all honesty, the design works better for the culture in India more than anywhere else in the world. It just fits. And now we have the perfect custom to emulate that fact.

J&D used the Royal Enfield Thunderbird powerplant as the heart of his build. It’s a 350cc air cooled single cylinder, that by design hasn’t changed much since the 60’s. Besides the engine and wheels, Jay claims the entire bike is hand fabricated. How far Jay has come from that first bobber. Gone are the rough edges, instead replaced by silky smooth curves. The frame follows the footprint of your standard bobber, with J&D’s own touches.

At the front Jay created a unique take on a girder fork, hand forming the fork legs and mounting the shock exposed up top. Combined with the 4-inch aluminum headlight and vintage style tires the Royal Enfield has taken on a whole new look. The angle of the handlebars is just sublime. Adding in the hand formed grips and brake lever, which are finished in polished raw steel, and it contrasts beautifully with the black and gold paint job. J&D created possibly the greatest looking suicide clutch and jockey shifter I have ever seen on a motorcycle. All hand formed from steel the end result is breathtaking.

The tank looks almost factory, but it is in fact a one-off product from J&D. Jay wanted to follow the lines of the original Royal Enfield but he also wanted to add two gas caps to bring out the vintage appeal. The paint scheme is perfect, and the dash of raw polished metal on the center strap make it pop like no other. Running down the bike the craftsmanship continues into the two-tone leather seat. Normally this is outsourced to another party, but Jay insisted on doing everything himself. Everything from the profile to the color choice is perfect.

Residing underneath the seat is the electrical box. This custom tank can easily be overlooked, especially with the perfectly matched paint job. But according to Jay, “It took 4 days to shorten the wiring loom into something which would fit into the box. It was a bit challenging, as a new wiring loom was not available, so if anything goes wrong then it would have been very hard to get the bike started.” Jay was able to get everything sandwiched inside neatly, he even elected to mount the ignition and kill switch into the box for a less cluttered handlebar.

The foot pegs and kickstand are also machined from raw steel, matching style to the beautiful hand grips. Being a hardtail there isn’t much for suspension, but what do you expect from a bobber. Visually the most stunning part of the entire build is the perimeter discs that J&D hand fashioned. “Of course, the perimeter discs were very hard to realize. But I took the challenge and you can see the results. It took almost 3 months for the designing and manufacturing. I made 4 or 5 different designs and after improvising, I finalized the 6th design.” says Jay.

I’m honestly surprised it only took 6 times. Handcrafting perimeter brakes from scratch is no laughing matter, let alone ones as visually appealing as these. Even the bare hubs on the wheels look fantastic. After fabricating and welding the rotors to each rim, Jay then had to design calipers that would work with this concept. He elected to use a set of mechanical calipers, an interesting compromise for pure aesthetics. I can’t knock it though; when it comes to aesthetics this Royal Enfield is in a league of its own.

And while the perimeter brakes steal the show, some of the subtle engine modifications are still worth noting. The most noticeable of the bunch is definitely the hand welded exhaust. The way it snakes about gives it the appearance of more than one cylinders worth of piping. It’s a nice touch considering it’s the one area single cylinders typically lack compared to their multi-piston relatives. The other features include a custom kick-starter and a pair of hand-fabricated velocity stacks for the carburetor.

The final product speaks to Jay’s dedication as a craftsman. Even he is humble when asked what part is his favorite, “It’s hard for me to choose any best parts of the Royal Enfield, as it is the combination of each and every part which creates the whole design. Basically, I designed all the parts while keeping the other parts in mind so I could create a beautiful example of pure craftsmanship and art. But the two things I admire the most in the build are the vintage rubber tires and the perimeter discs. I think without these parts, the bike will be not as charming as it is now.” 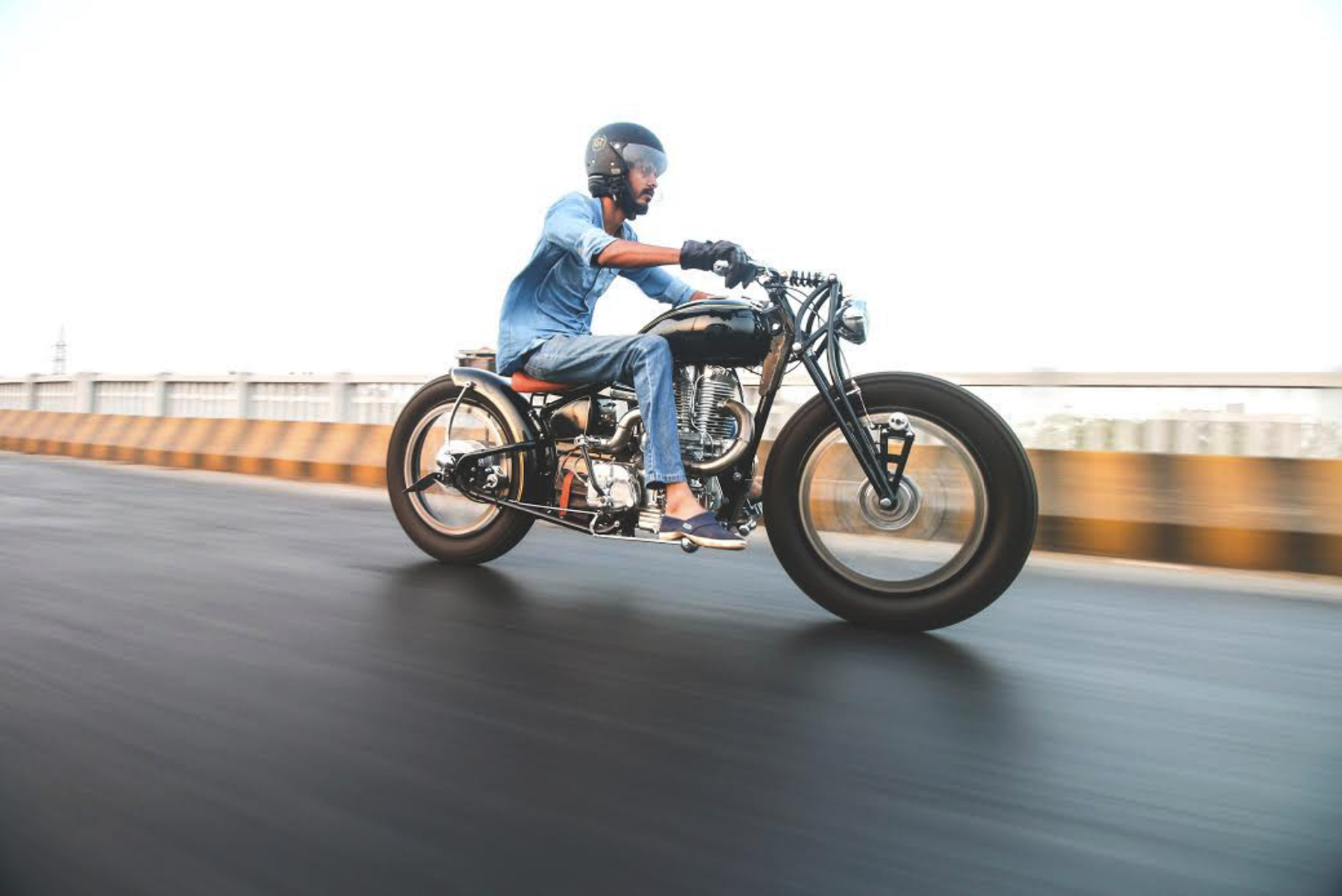 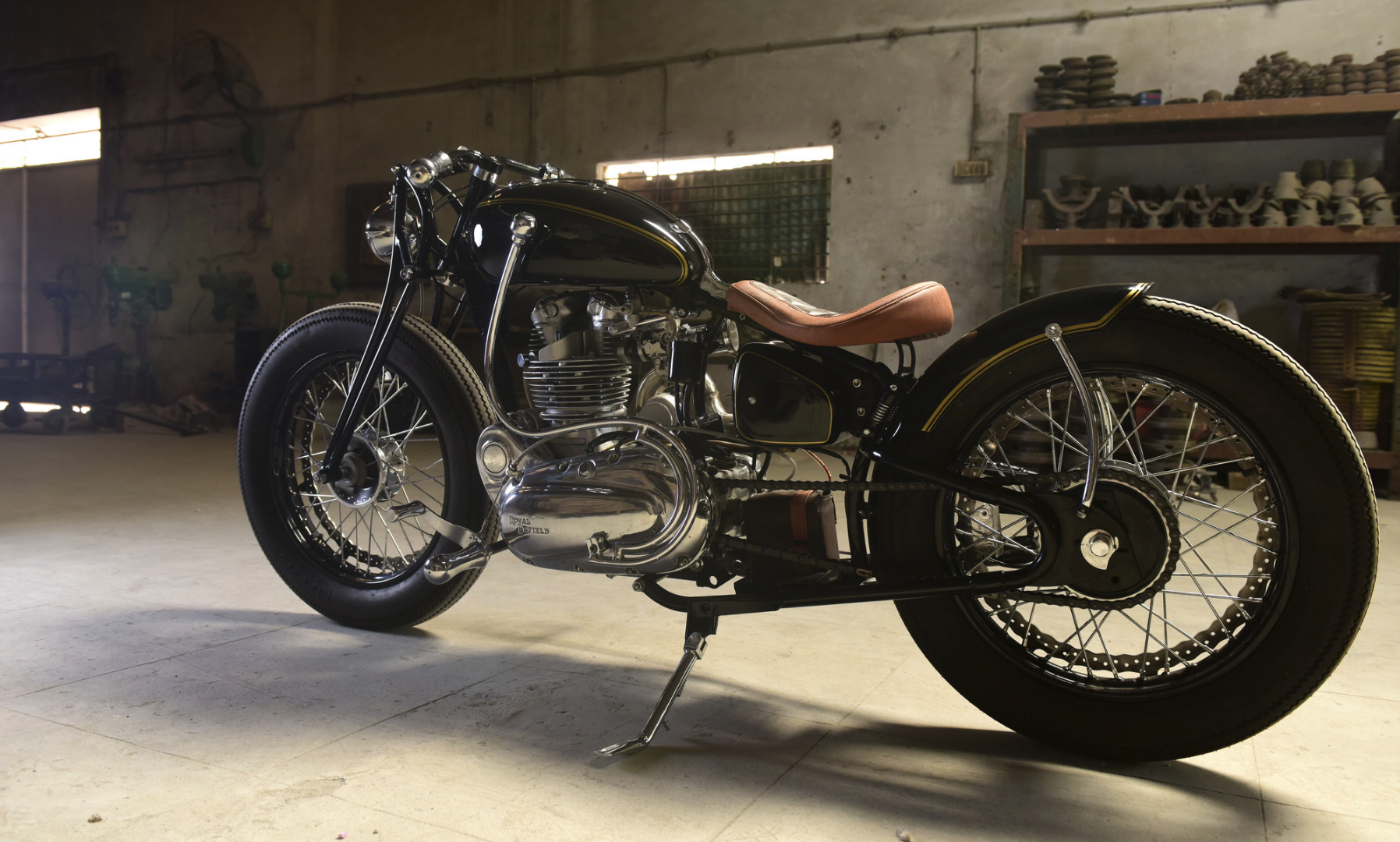 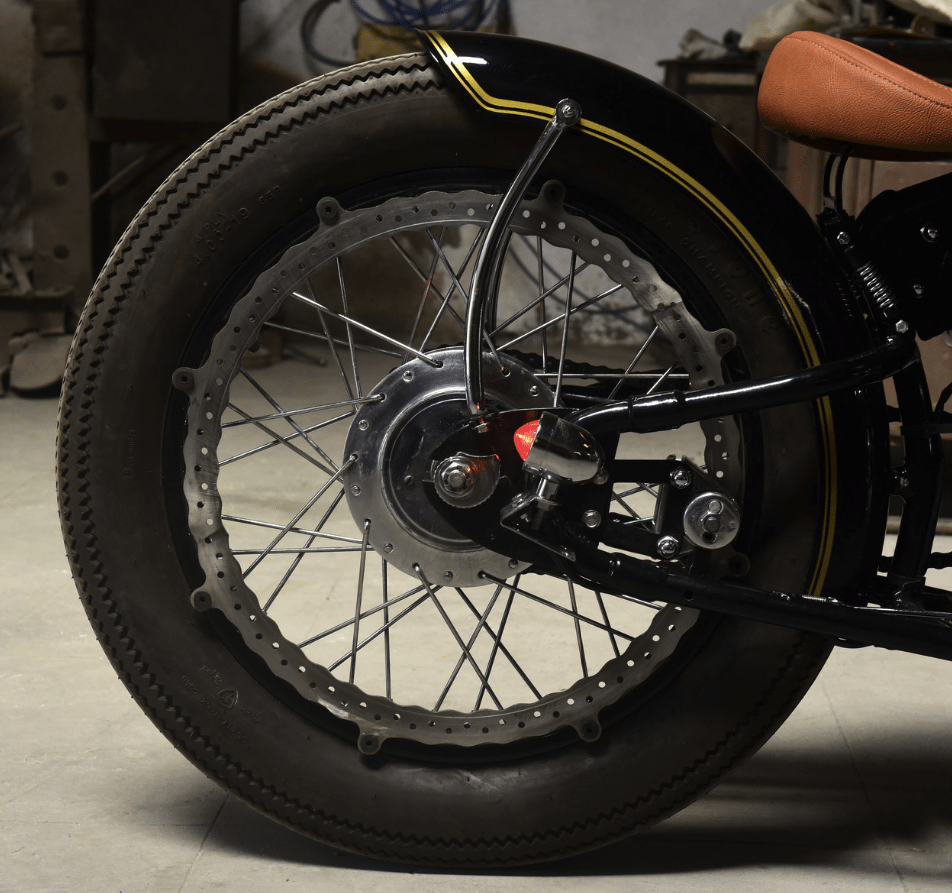 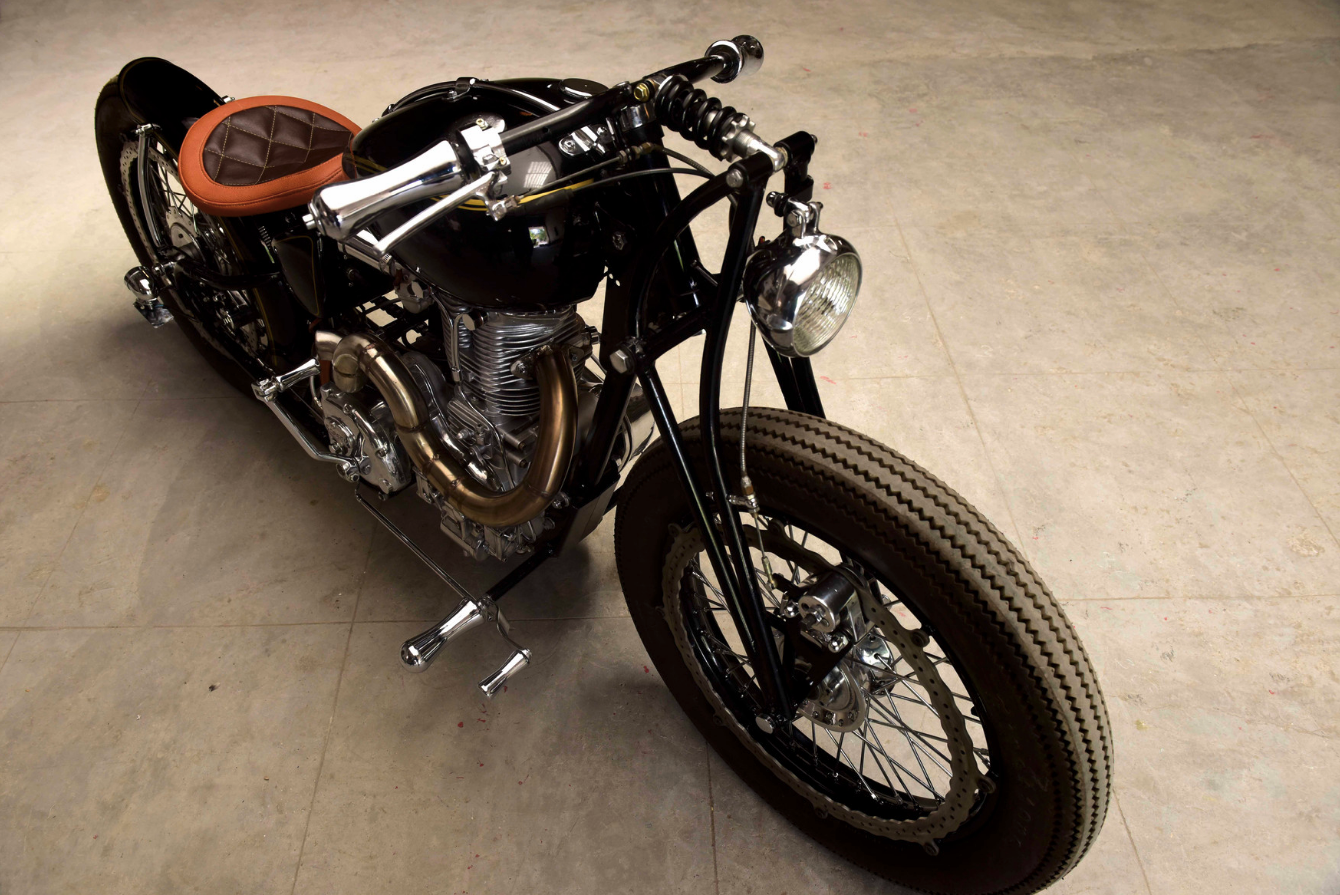 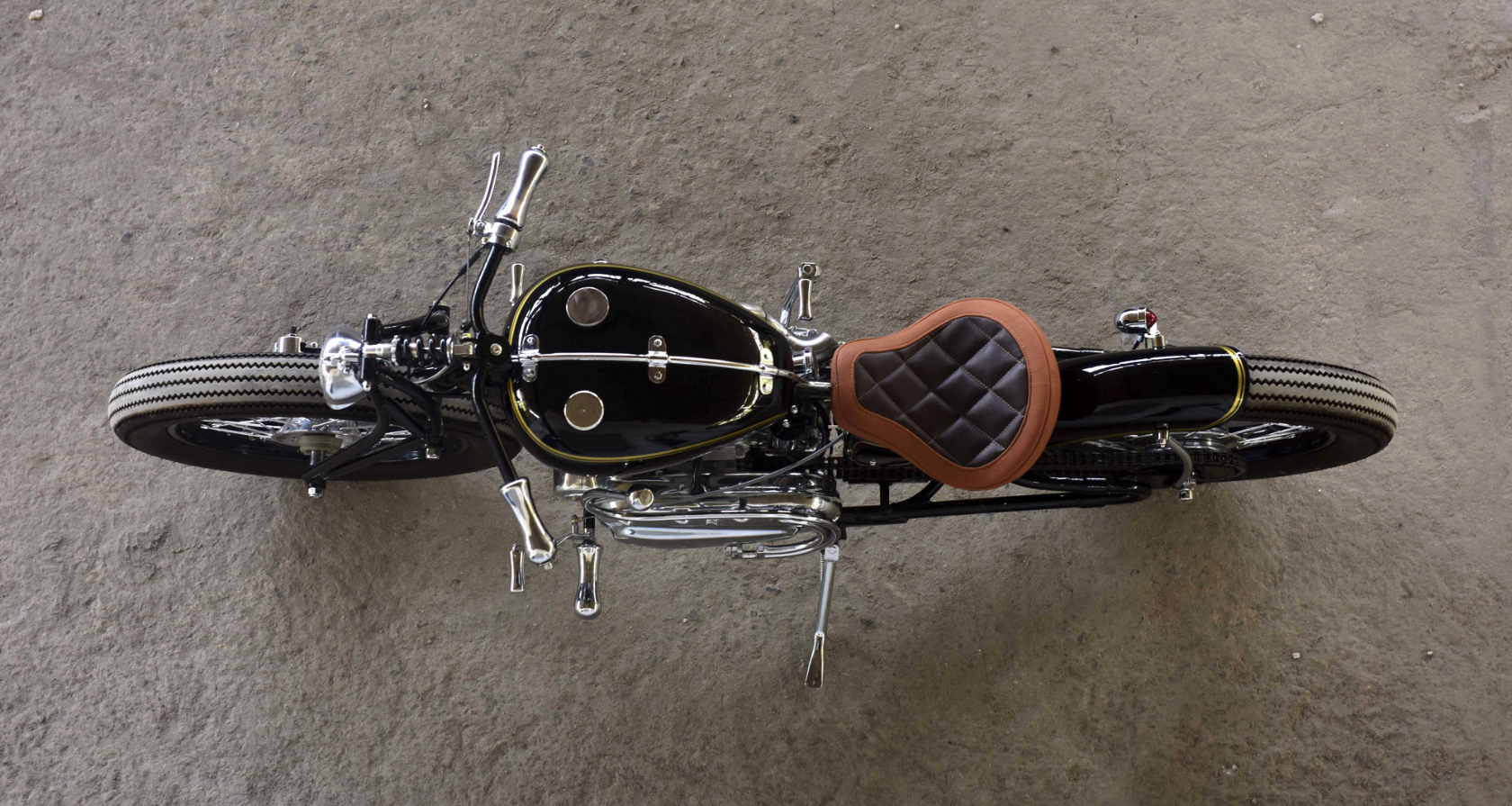 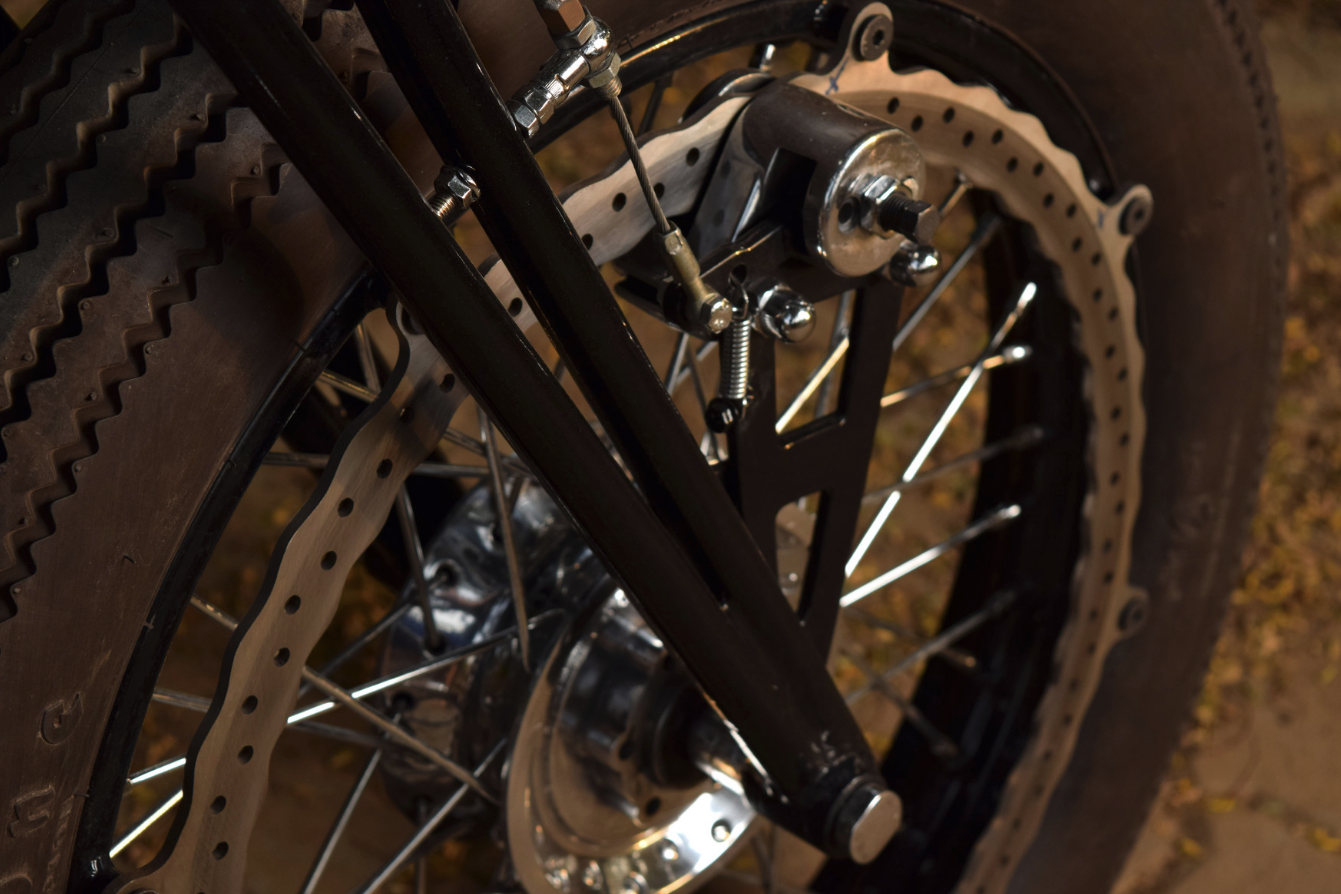 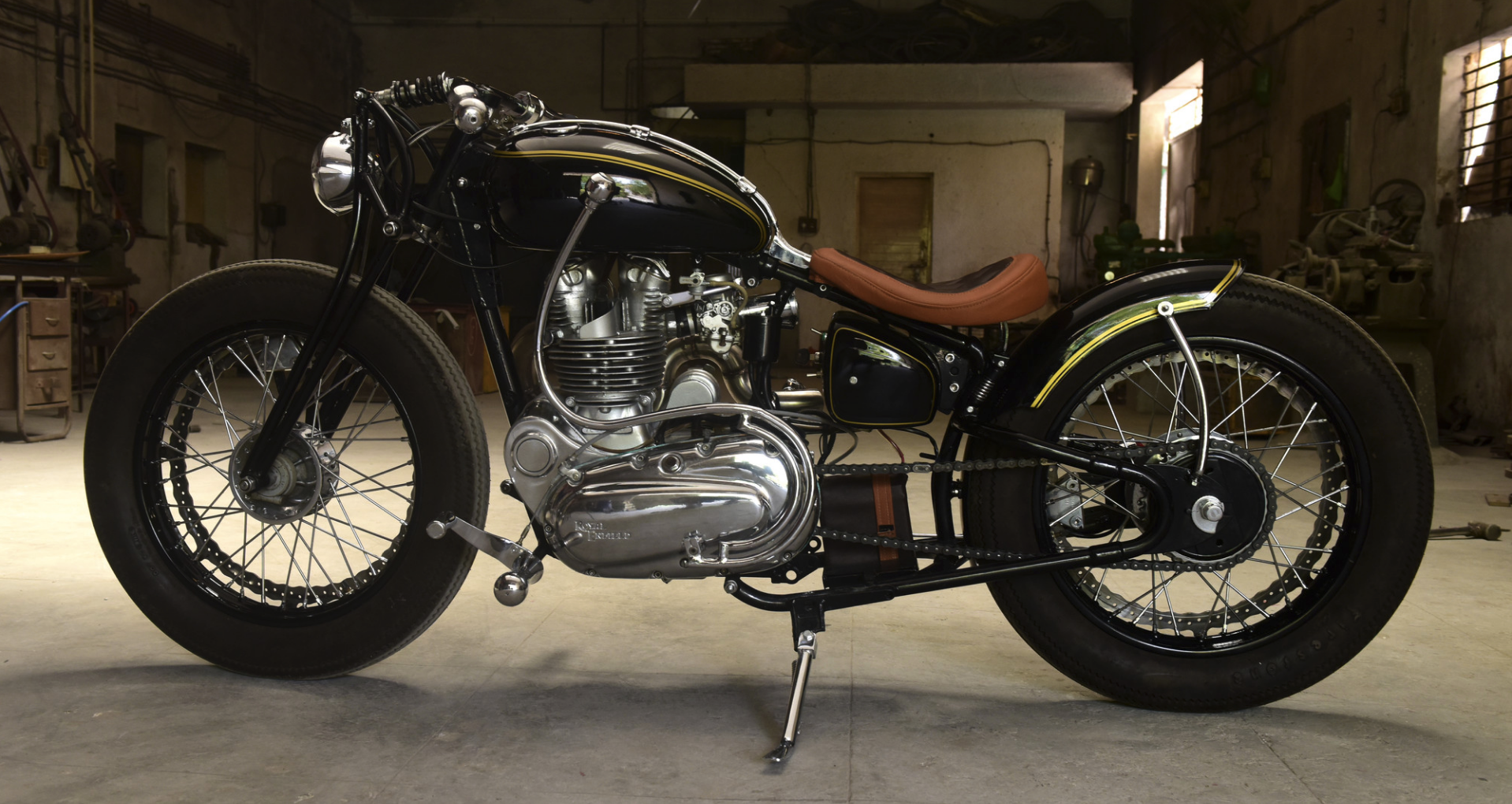 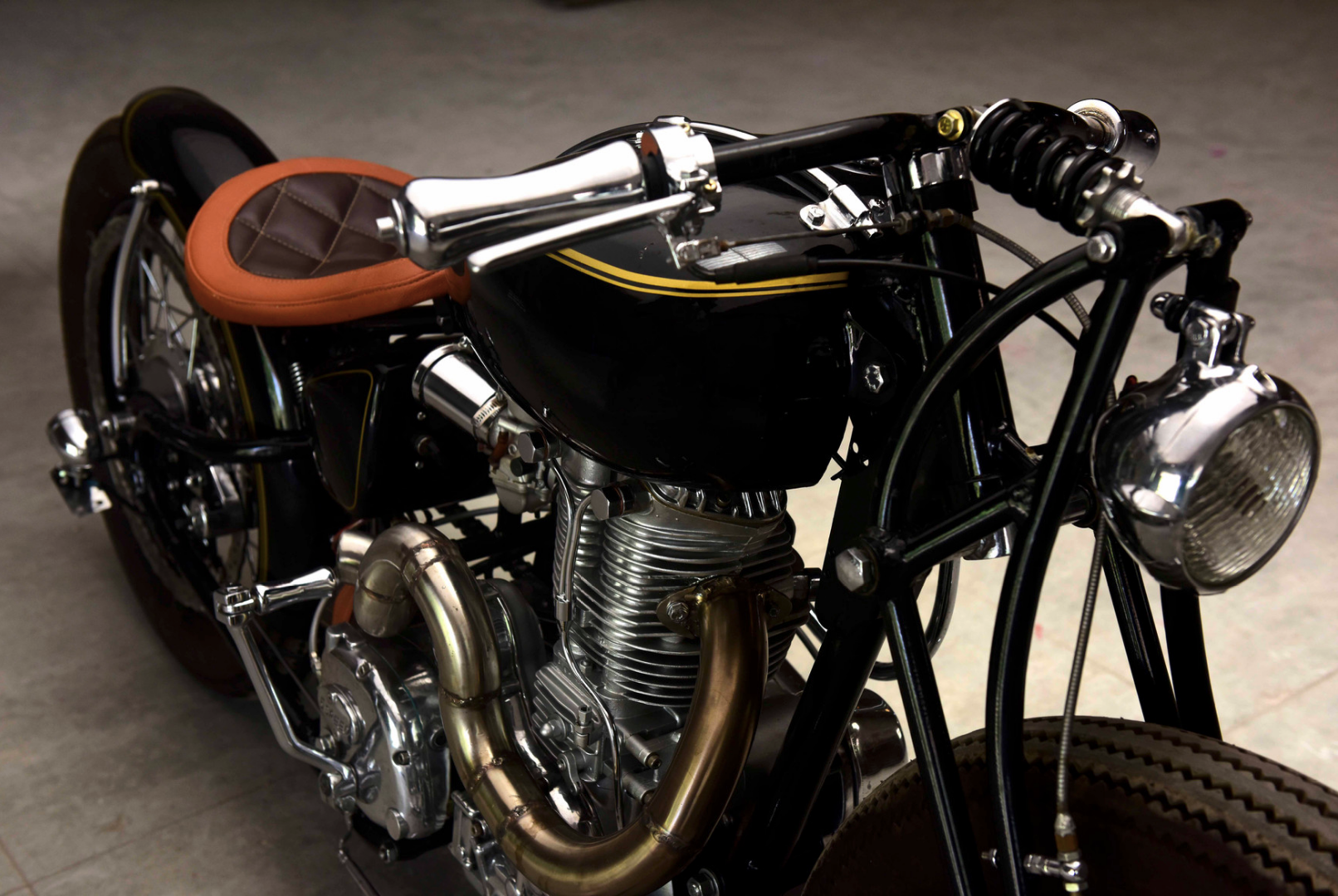 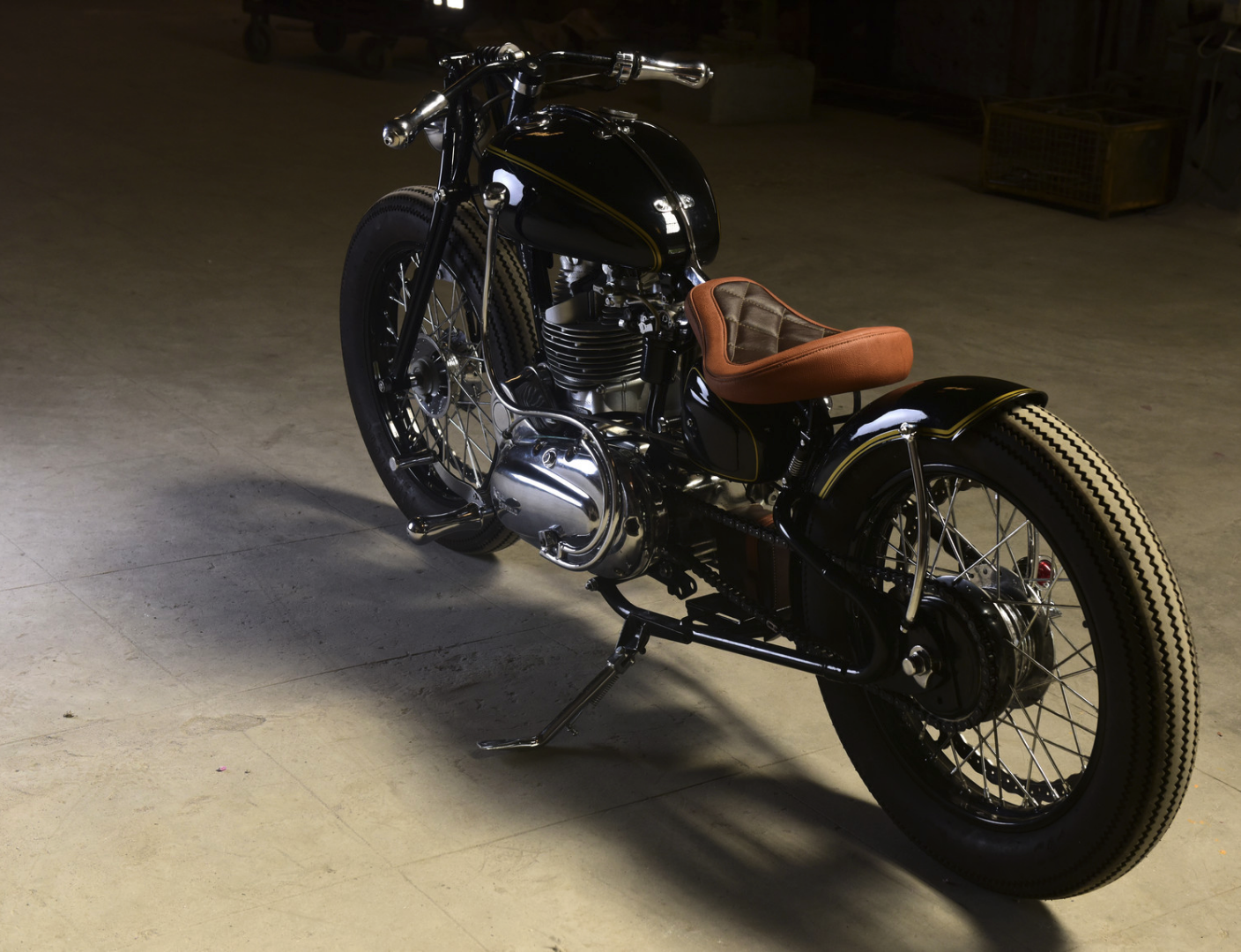 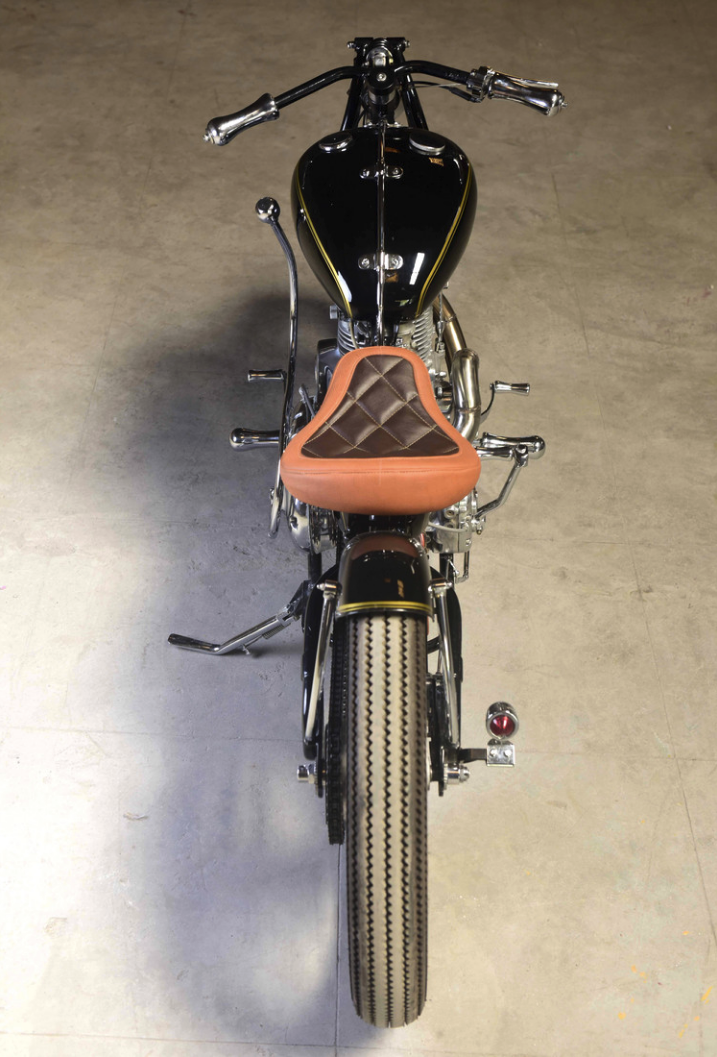 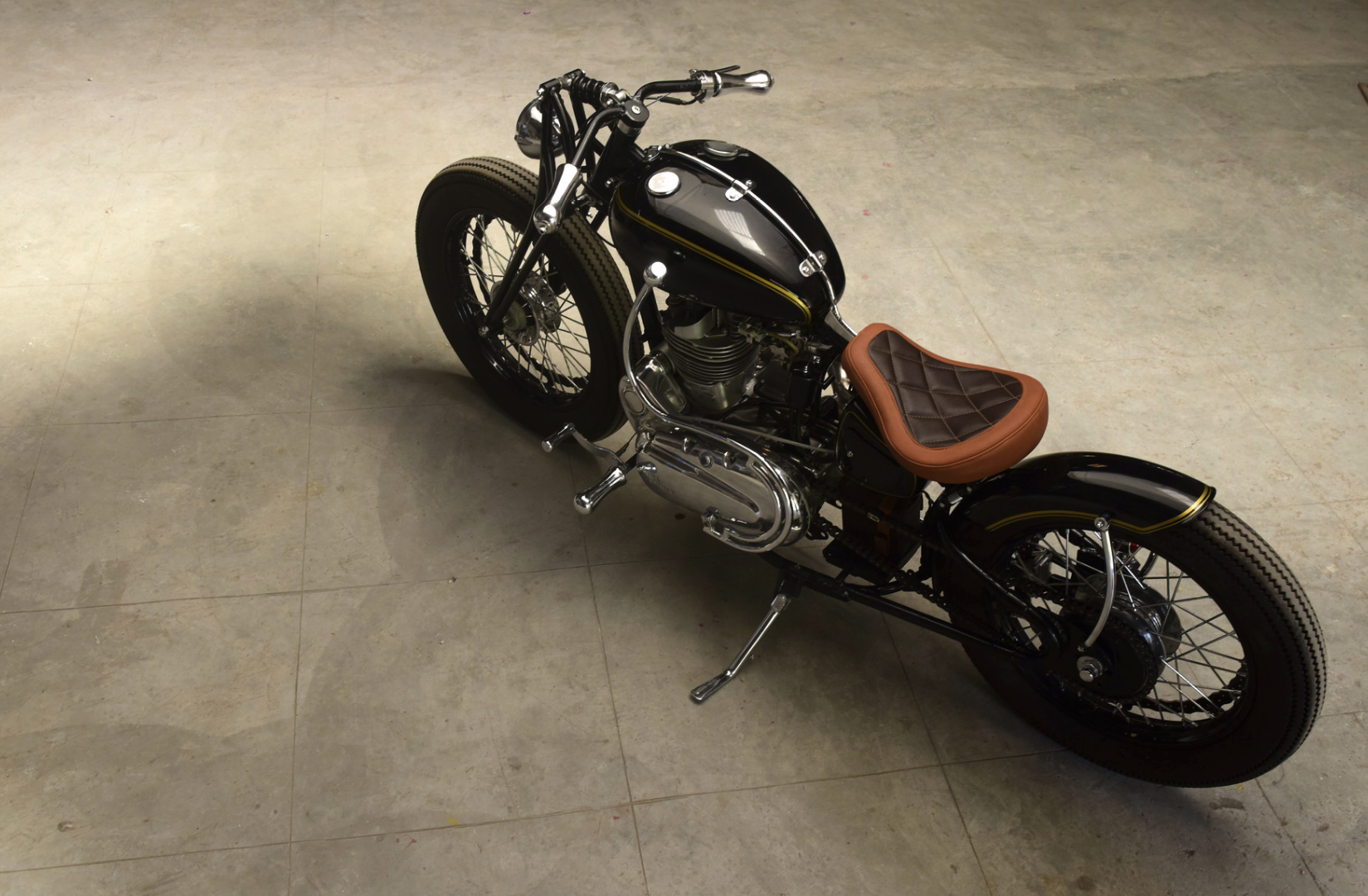 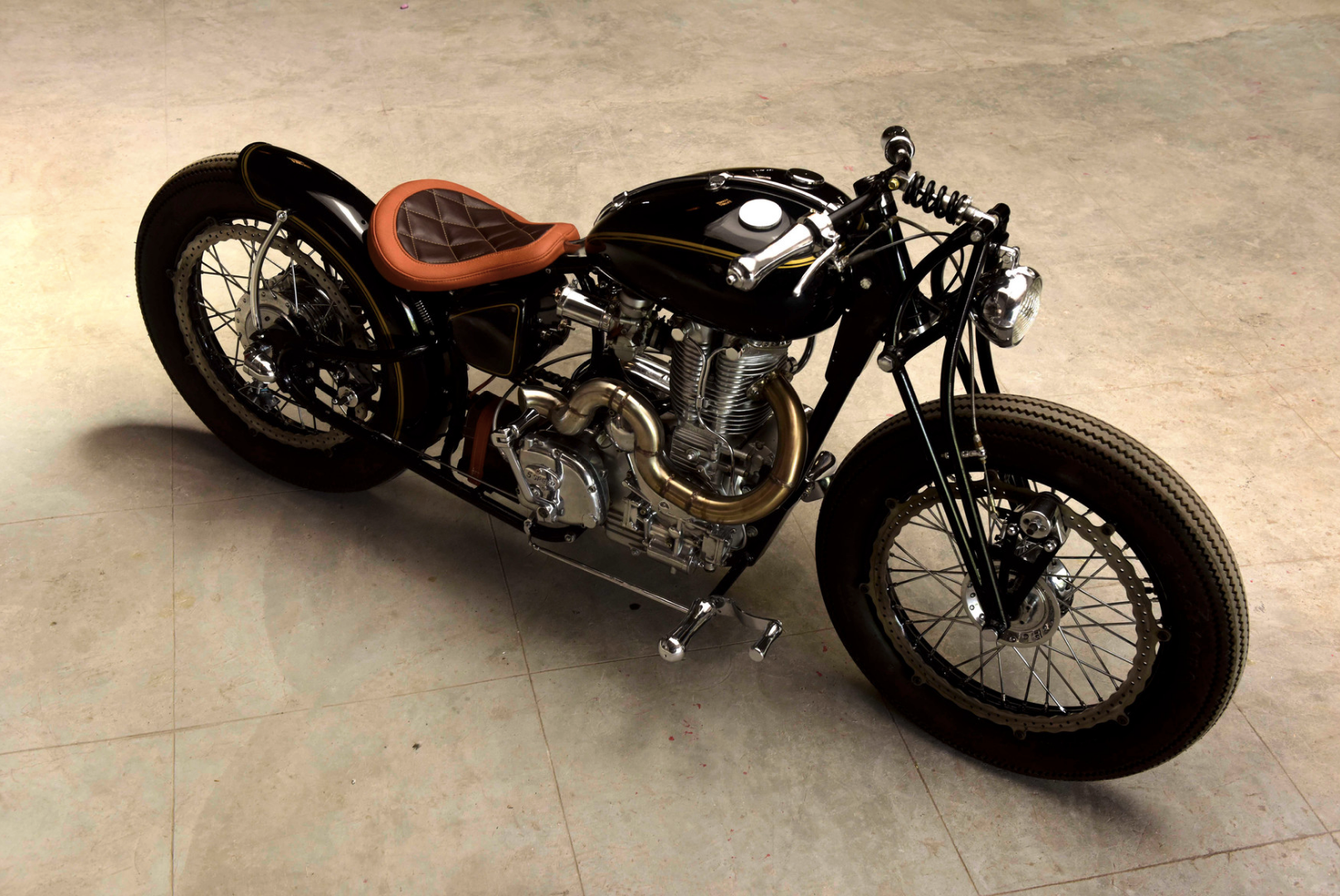 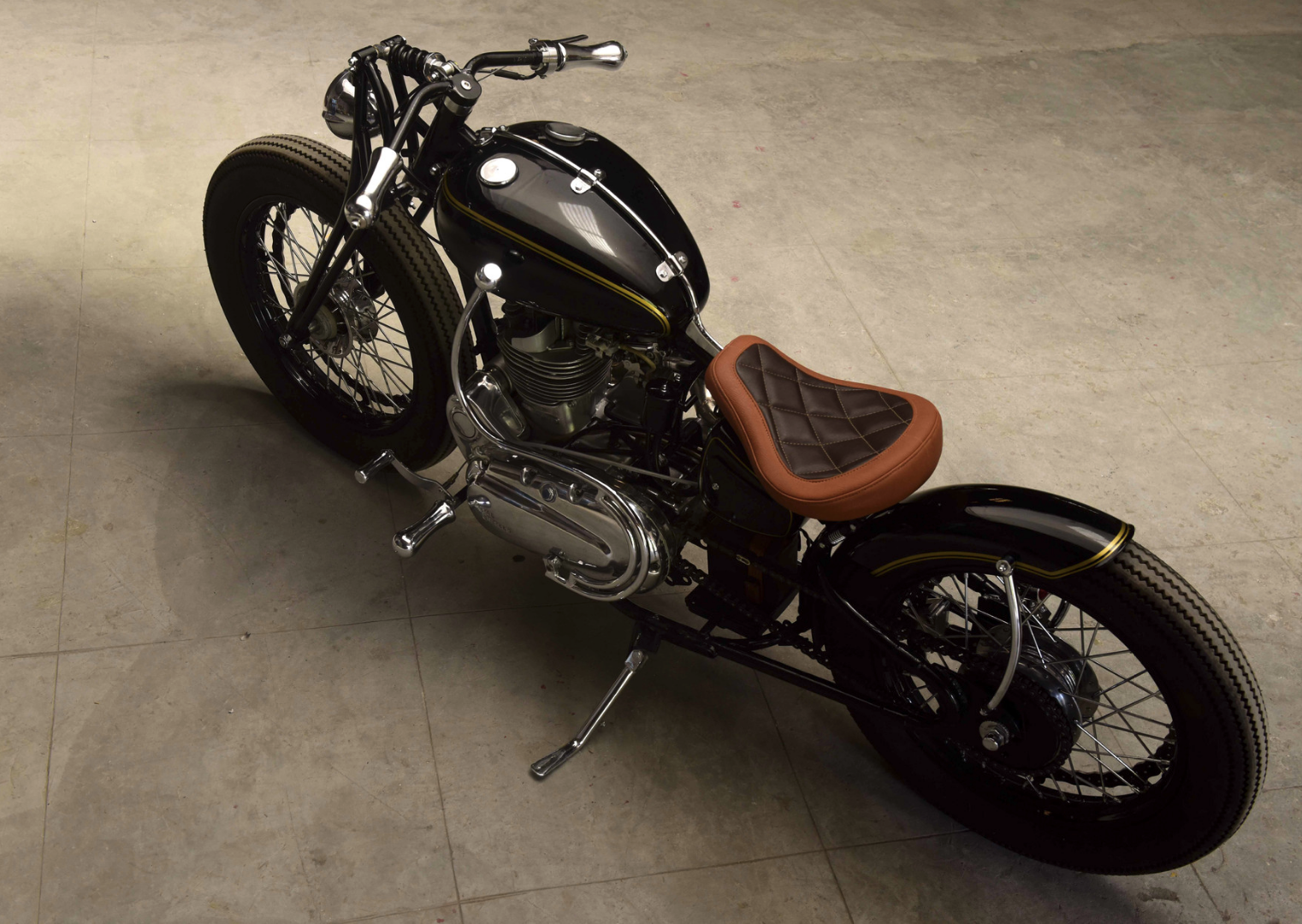 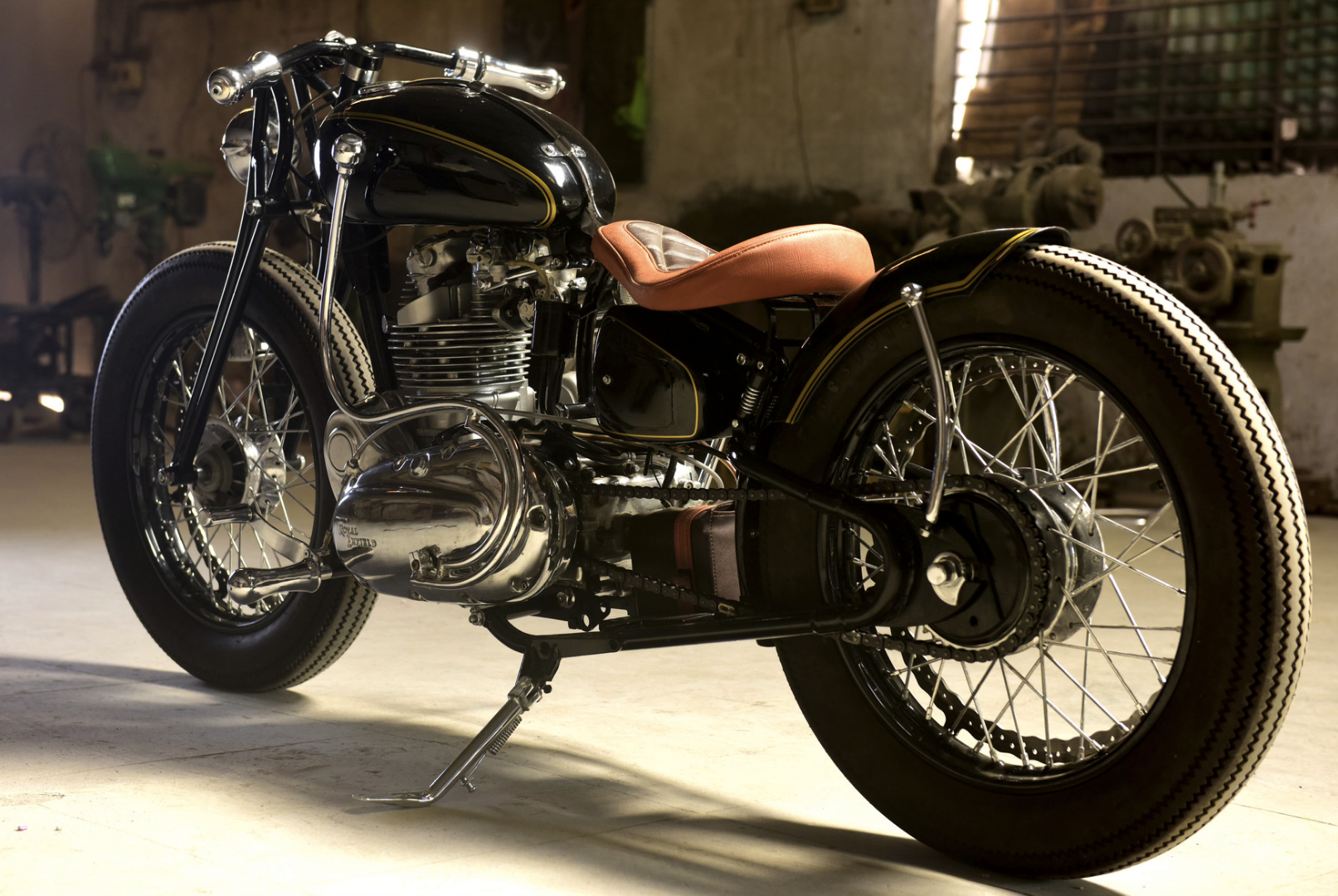 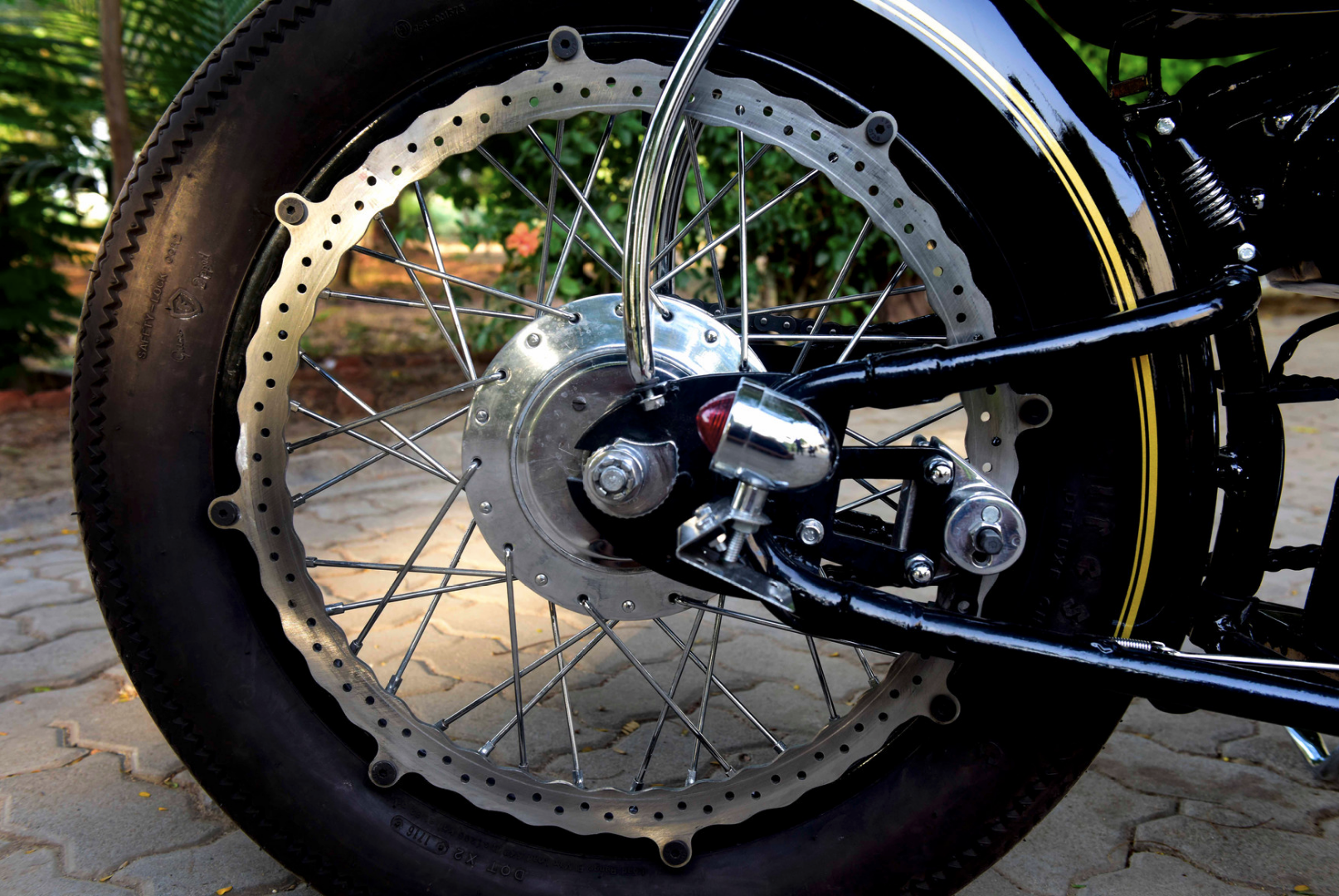 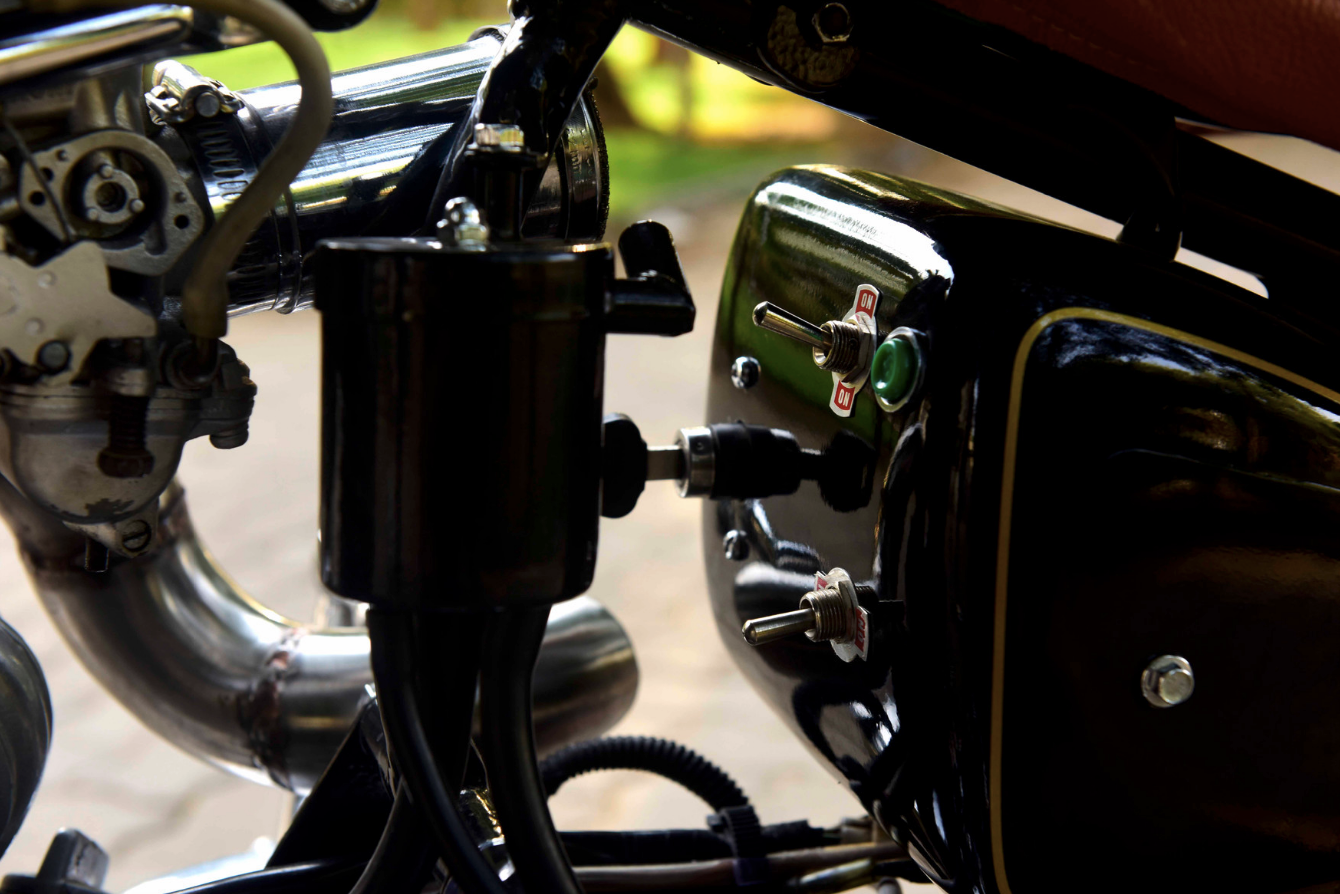 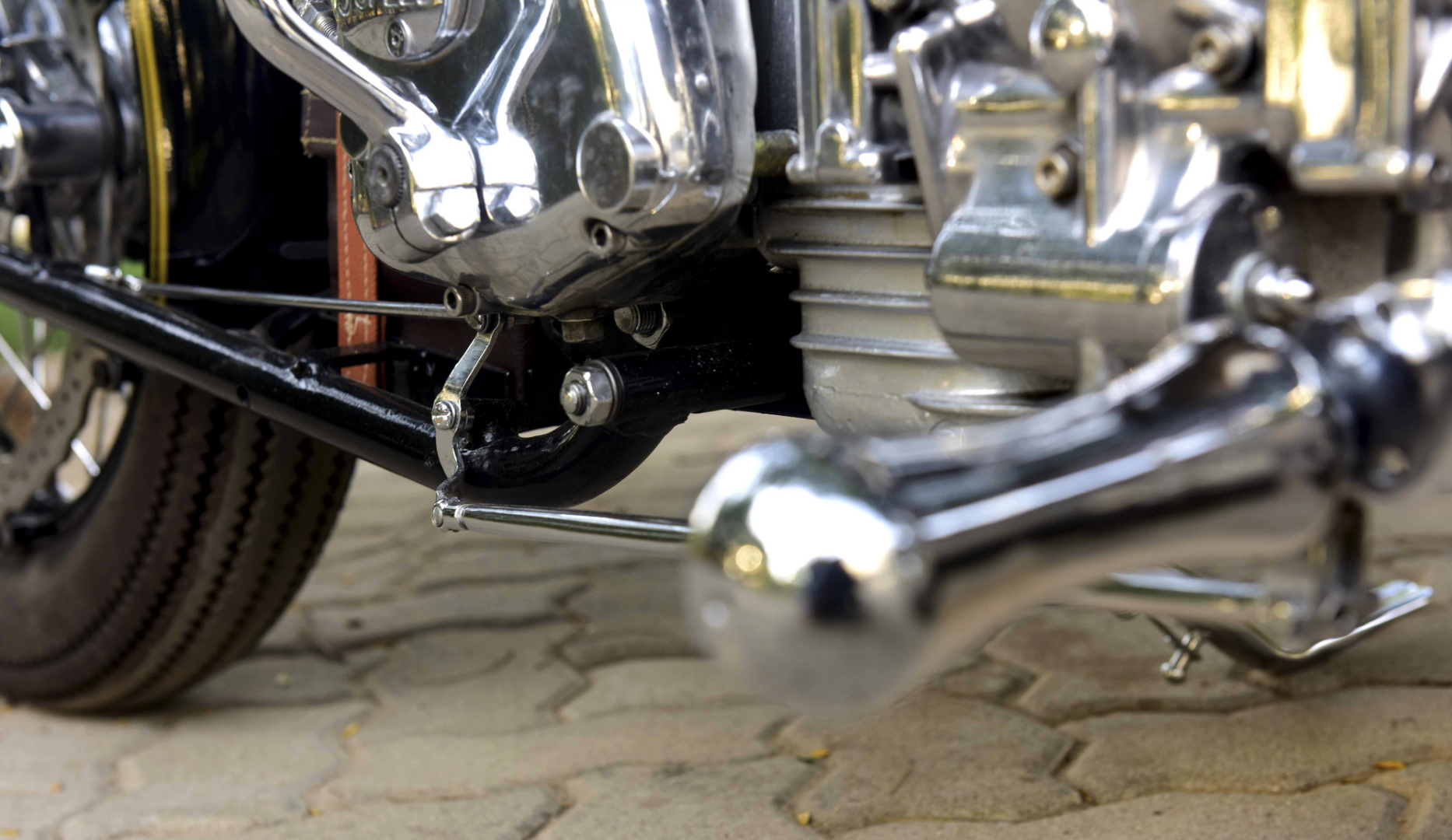