Montreal is the home of many things, with one of its most outstanding characteristics being its character. With people from all walks of life, the city thrives on being a cultural hub. So it’s no surprise that any motorcycle shop that to come out of this fine city would bring a unique take on custom motorcycle culture as we know it.

Clockwork Motorcycles is just that shop. Their latest build is a mixture of Japanese styling, Harley-Davidson heritage, and the iconic street tracker looks. If you know me you should then know that I am a huge Walt Siegl fan, having built what I consider to be the ultimate Sportster. So naturally, Clockwork’s Sportster-turned-tracker peaked my interest. With closer examination I was totally sold, I now have a tie for my number one sporty.

Sam at Clockwork Motorcycles has a history of some very nice, subtle builds. He sold his personal custom bike to fund a new project, one he already had a vision for in his mind. After selling his Honda CX he landed on a 1993 Harley-Davidson Sportster 883 for the new jumping off point. While it’s a fine motorcycle, an early 90’s Sportster is not much of a motorcycle when it comes to originality. All of that was about to change thanks to Sam.

Sam did not want to design a show-stopping high-budget build. This was his personal bike after all. Instead Sam wanted to emulate the Japanese Harley-Davidson culture. On the other side of the world the Japanese have a booming Harley-Davidson culture that celebrates the brand’s heritage like it’s their own. “They have a great style and a good eye for building bikes with nice lines and details,” Sam says. “But principally, they do it while showing a real respect for the brand and its past.” As a huge fan of Japanese builders, I completely agree. It’s also refreshing to see another builder adapt that philosophy into his own style.

After ditching a fair amount of the original bike it was time to get working. Sam elected to keep the engine stock for now, utilizing the 883cc V-twin as is. Instead he ditched the heavy stock pipes in favor of a custom fabbed set of tracker styled units, saving weight in the process. He converted the Sporty to a chain drive system, ditching the clunky looking belt system. While working on the rear end Sam also elected to swap out the 16-inch rear wheel for a taller, slimmer looking 18-inch cast wheel from an Ironhead.

In an effort to give the Sportster the look Sam wanted he raised the rear with a pair of longer shocks off of a vintage Airhead BMW. While he had the rear end disassembled Sam described the process he went through to get the desired tracker look out back, “For the rear end, I cut the fender struts close to the shock mounts and fabricated a tail hoop to close it off. I then made the rear fender, keeping it high and with a practical length. For the seat, I took inspiration from Harley KHs from the 50s and vintage Bates-style seats. Then I fabricated the seat pan and brought it to Rod Alves who wrapped it in a nice, natural tan leather.”

Sam ditched the stock tank, replacing it with one from a Superglide Shovelhead, instantly transforming the Sportster into possibly the best-looking tracker. Sam topped it off by having it painted at JP Huet. The green color was picked from House of Kolor, with some subtle gold pinstriping. Combined with a custom logo designed by his friend Raff Labrie, the newly minted ‘Slim Jim’ was starting to look a lot more like a show bike than Sam had planned. Another aspect that Sam got perfect was that he didn’t black out all the engine parts, instead choosing to display the polished aluminum. This adds to the vintage theme, a perfect touch that is easily overlooked.

The front end features hand formed handlebars, styled after the triumph T120 of old. The controls are a mix of Harley and Honda bits, all fitting the tracker theme to a T. The front wheel is 19-inches, matching the rear from the Ironhead sporty it was stolen from. Sam used the classic Dunlop K70 tires, giving the Sporty the feel it needs to tackle city streets or the occasional dirt road.

Overall Sam is very happy with the bike, even going on to say, “The bike has a great feel to it and it’s real fun to ride. I’ve got to say, I fell in love with Harleys doing this, and it’s certainly not the last one going out of this shop.”

I think you would have to be an absolute lunatic to not appreciate this motorcycle, and can only imagine how fun it would be to ride. 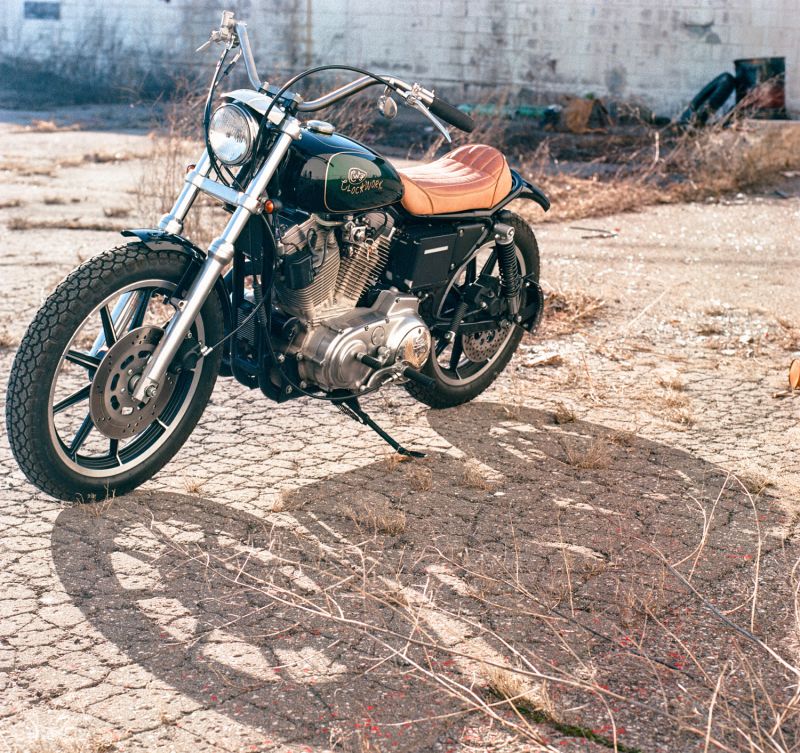 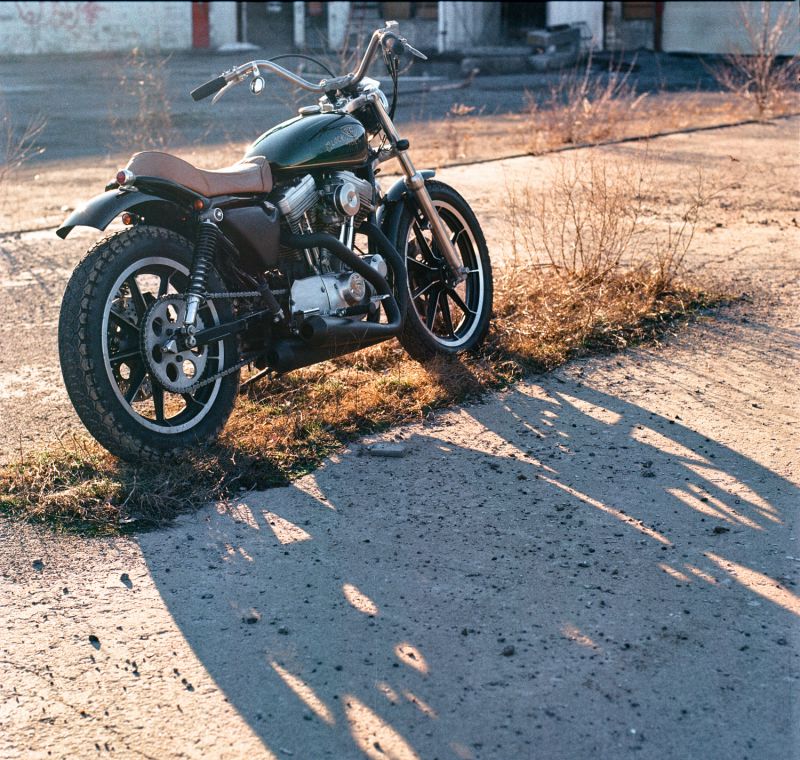 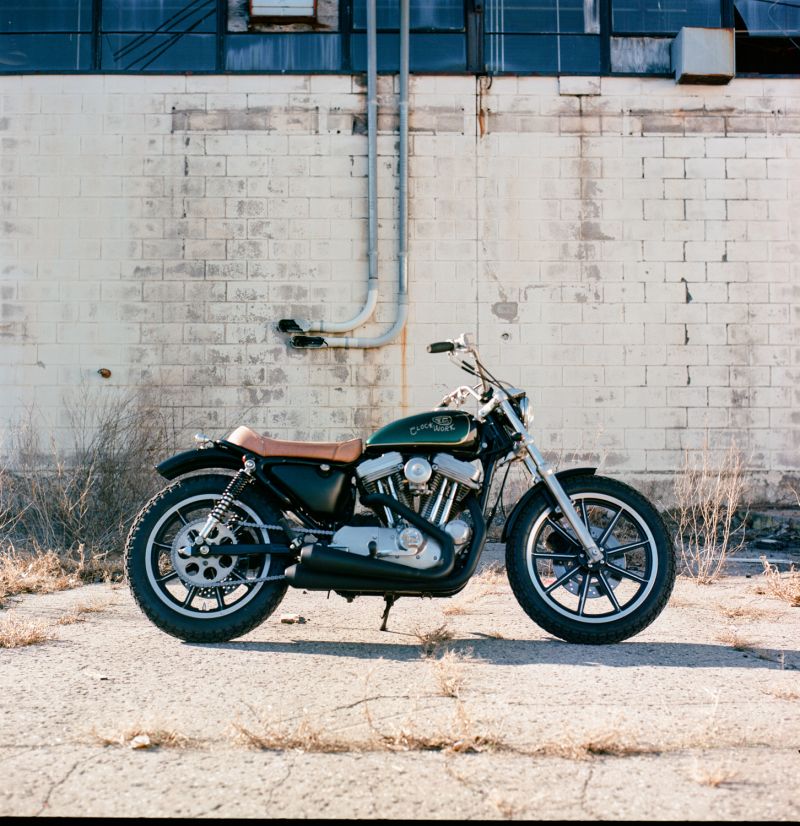 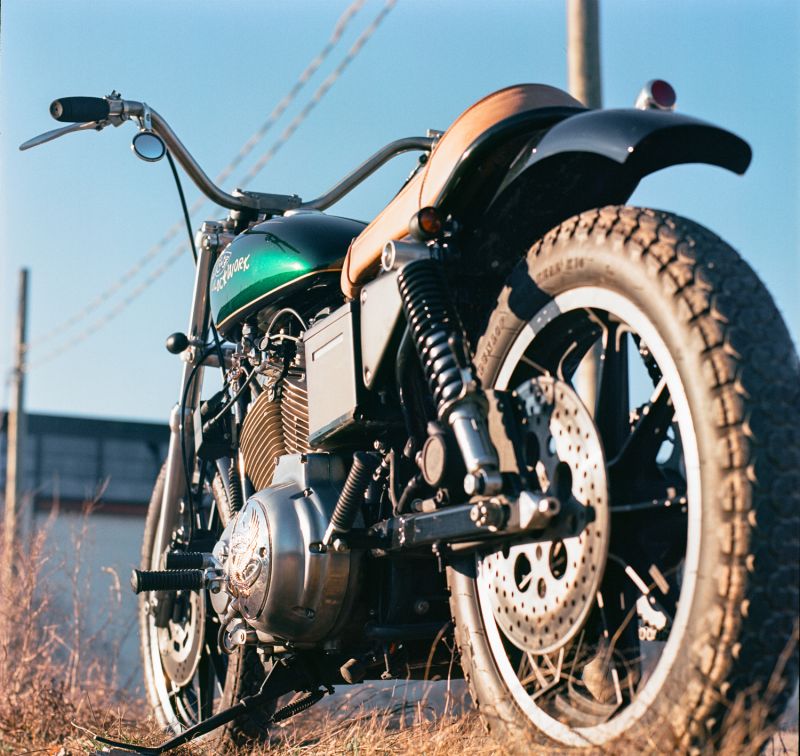 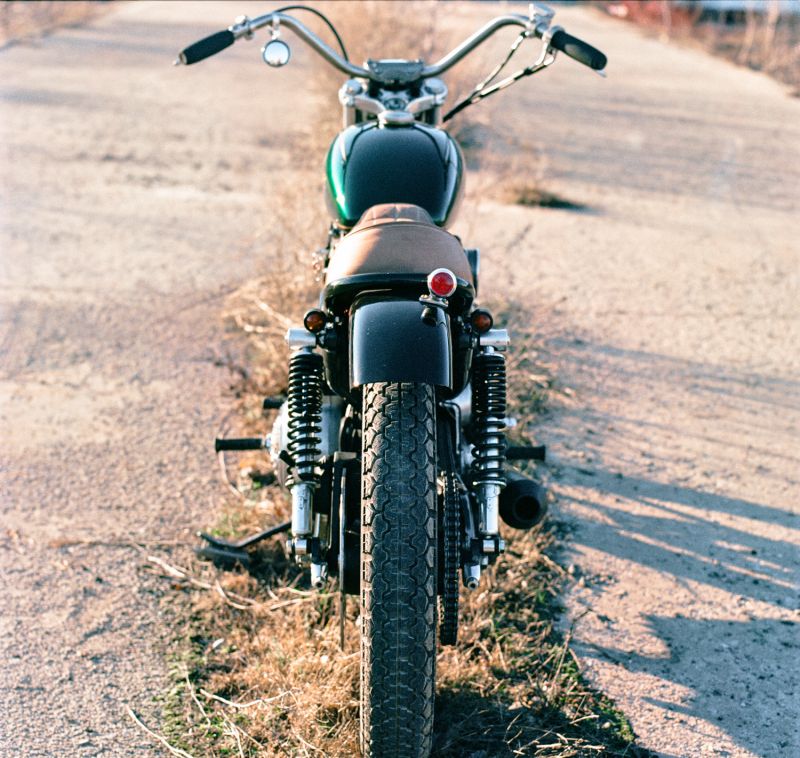 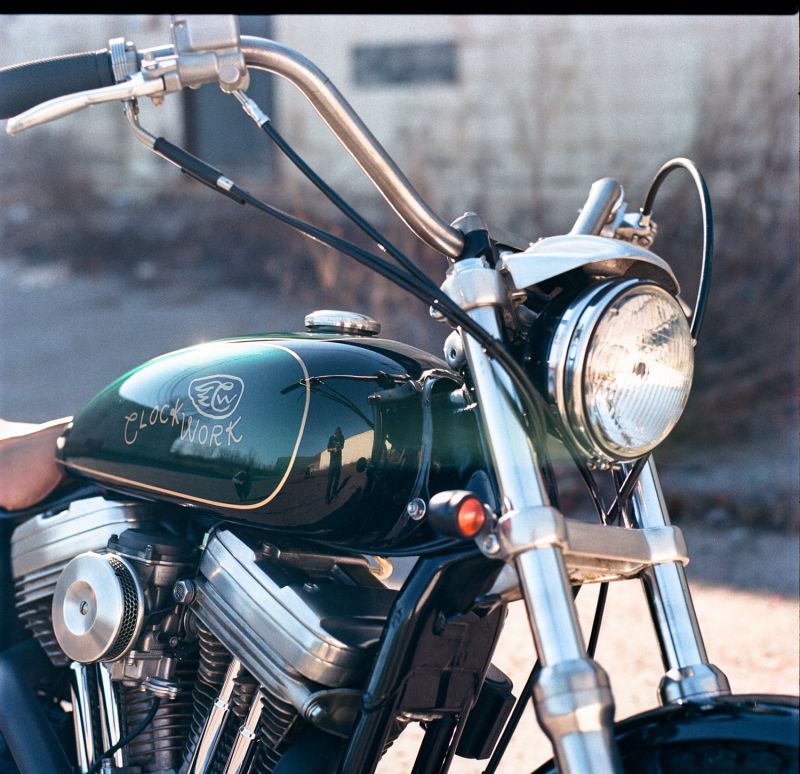 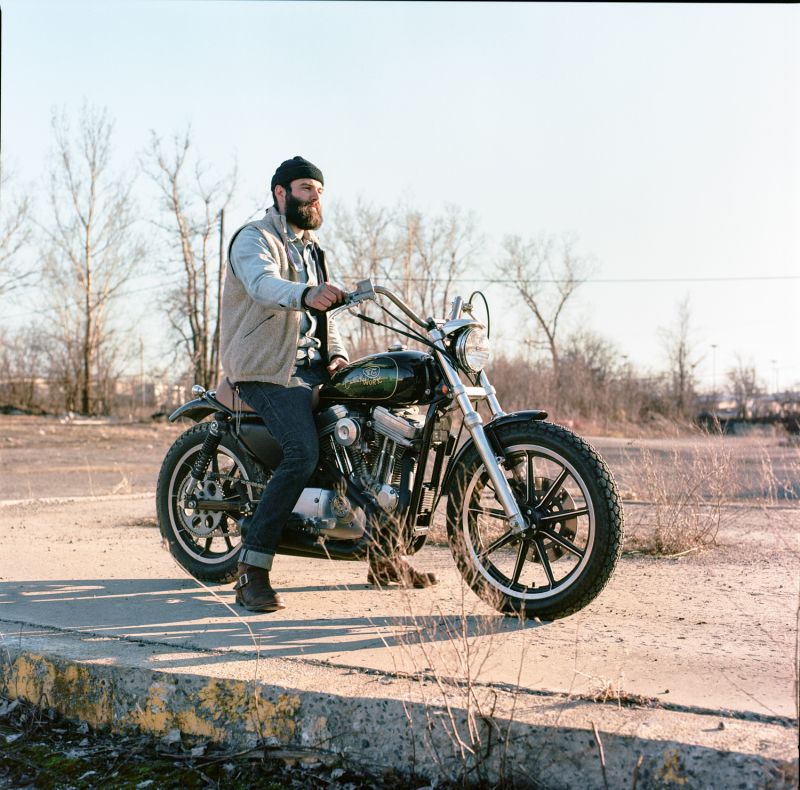 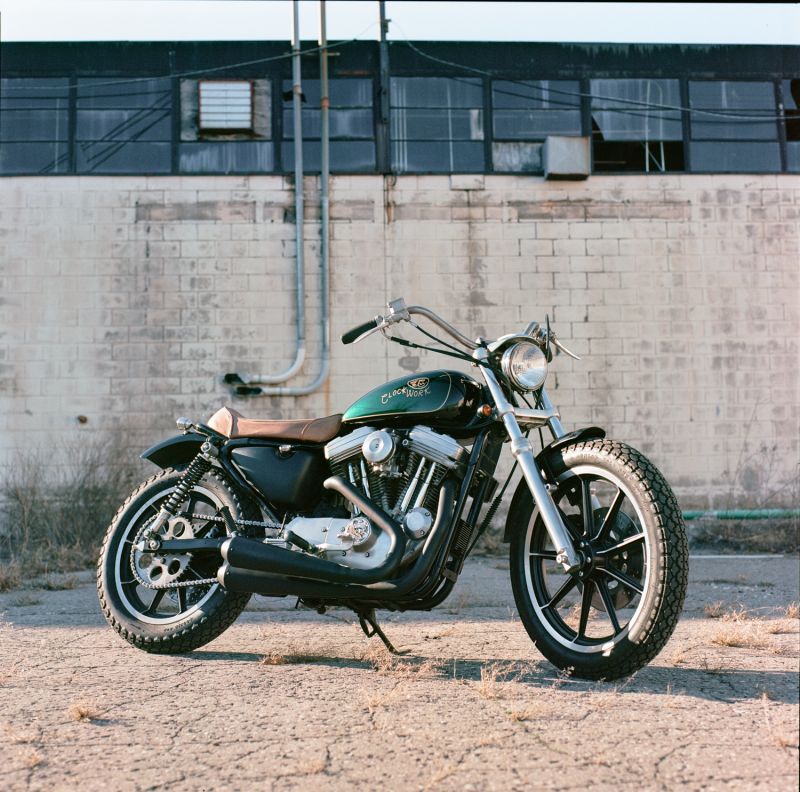 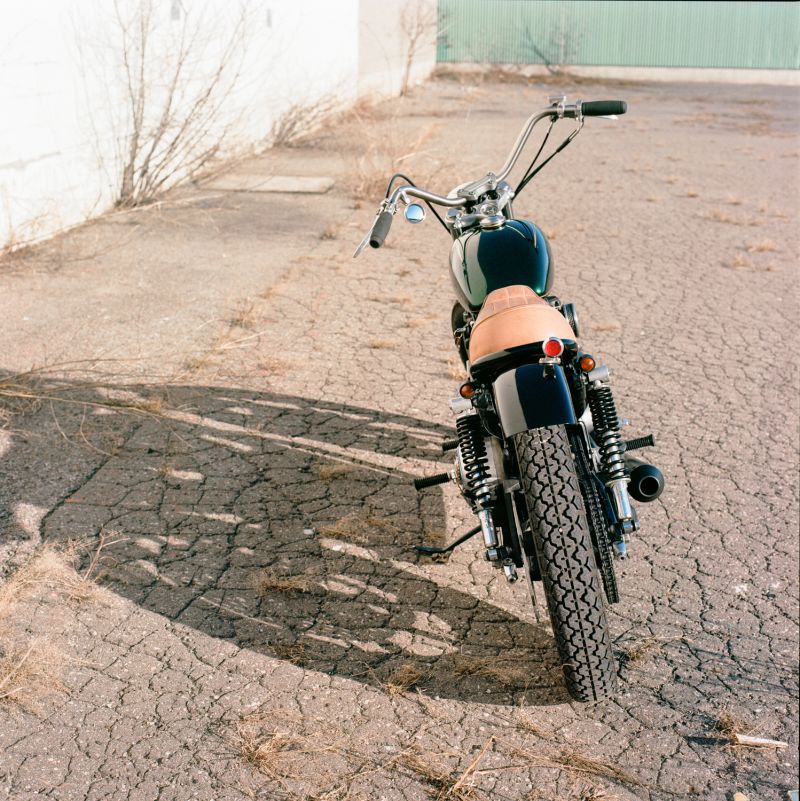 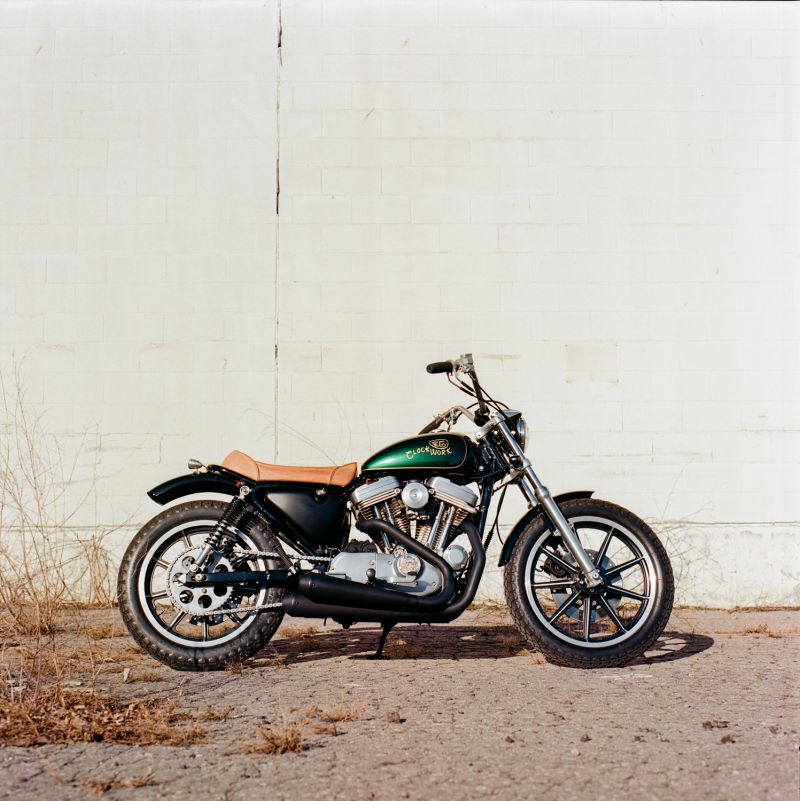 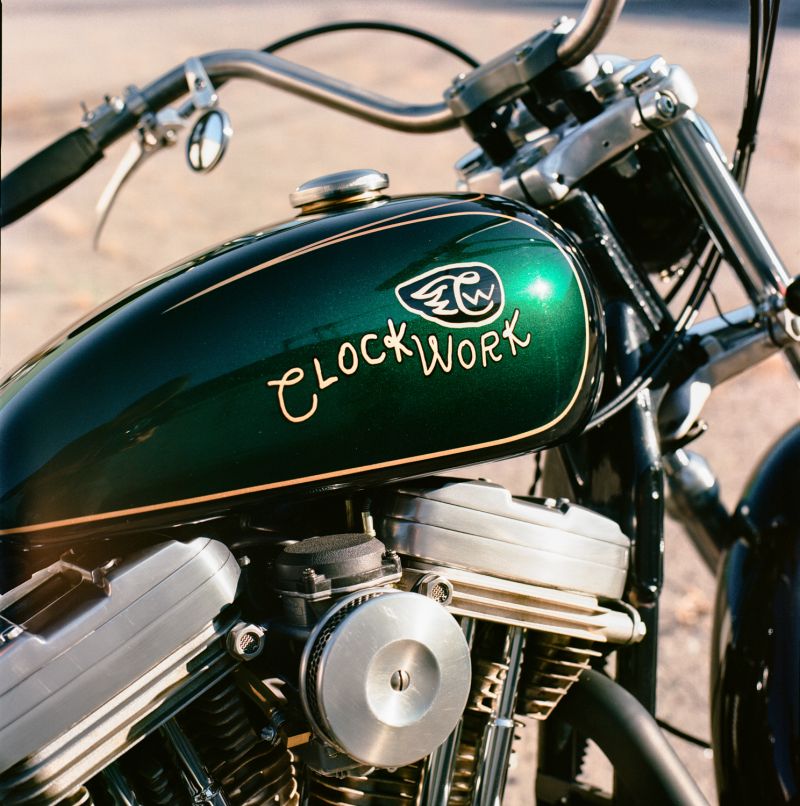 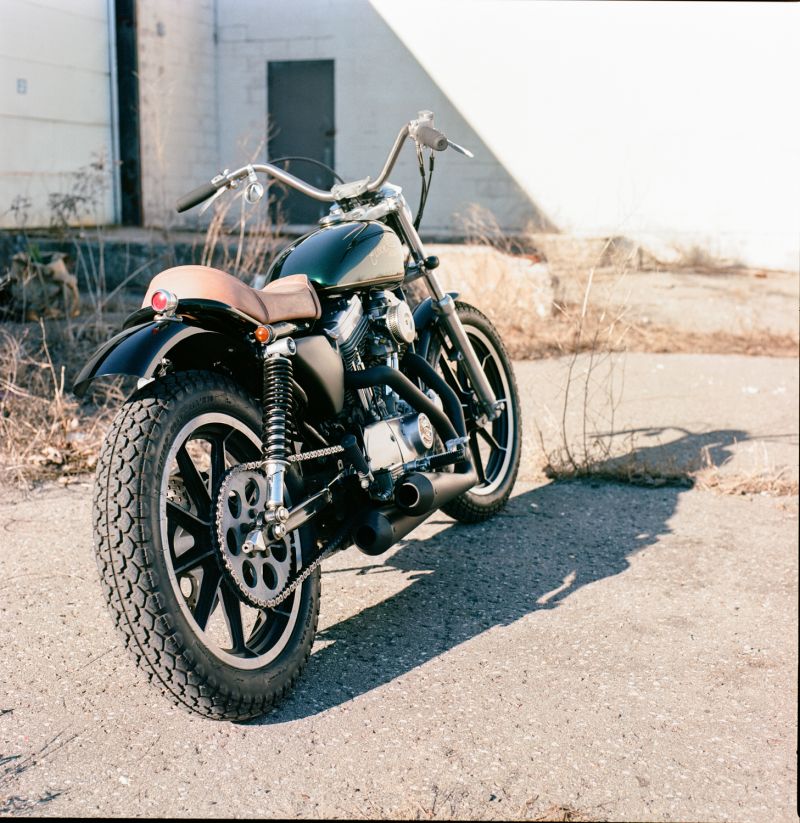