There is a new category of custom motorcycles upon us, and it has yet to be given a name. With scramblers, cafe racers, and bobbers all seeing their time come and pass, it’s time to focus on a new market. Adventure Harleys.

The first adventure Harley I had ever seen was the incredible Carducci. The Carducci was an absolutely incredible machine and is easily still the standard as far as offroad Harleys go. Unfortunately, that level of badassery comes at a serious penny, making the Carducci well out of reach for most. Thankfully Carducci isn’t the only shop in town willing to see a big twin stuffed in an off-road chassis. When approached by a client with a 2005 Sportster 1200 Gasser Customs jumped on the opportunity to put this bike together.

As the head of Gasser Customs, Adam Gaspic explains how the situation unfolded, “The customer brought us the bike after seeing one of our other builds at the L.A Calendar motorcycle show. He wanted to create an American adventure bike that was specific to him and his needs.” Those needs? A bike that was truly capable, in every sense of the word. To get the desired result that meant taking the bike down to the frame, and working their way up.

Like any Harley, the first thing to address was far and large the suspension. While stock it had a mere 3-inches of travel, the bike now sports a massive 12-inches of travel up front. This is, of course, thanks to a pair of USD forks from a dirt bike. To manage the mounting the new forks required custom triple trees, which Gasser built in-house. Machined from billet aluminum, the triple trees were also designed to accommodate a dirt bike style front fender, for when things get muddy. To complement the new forks Gasser had the little sport equipped with Hagon progressive rate shocks, boosting the rear travel considerably. While travel was increased in the rear, it is unable to match the front, likely due to frame restrictions.

To aid in reducing the unsprung weight Gasser Customs had a set of Excel wheels built exclusively for this machine, adding a nice spoked touch to the entire build. Once the chassis was rolling it was time to give it some power. The engine remains relatively untouched, with a few minor exceptions. First, the exhaust. A beautifully crafted stainless steel 2-1 system was built in-house. Then they gave the wiring a brush-up, as well as a new electronic timing system.

Much like the Carducci, Gasser custom built a phenomenal steel gas tank. Unlike the Carducci, this one was not designed to mimic the popular adventure tanks we know and love. Instead, it has a hint of a classic peanut tank, with some stylish knee cutouts thrown in. Paired with the long bench seat it comes out with a perfect retro feel. The seat is actually a re-purposed TW200 bench, a strange find with a perfect fit. While all of these things are great aspects of the bike, the most notable are obviously the custom panniers hanging from the back.

“The rear pannier frame was challenging, as it needed to hold a lot of weight and be strong but not be too bulky. Also, a product like this did not exist, so it needed to be designed and built from scratch. He also wanted the ability to remove the boxes easily if needed, which added more thought in the design process,” Explains Gaspic. While it may have been difficult to construct, the end result is extraordinary. With a pair of Touratech aluminum cases and twin Rotopax fuel cans, the back of this build has become its adventure lifeblood. The frame doubles as a rack, allowing any assortment of things to be strapped to it. The panniers are also fully removable, but when locked on the bike they prevent the fuel cans from being stolen, a needed feature when out on the land.

Before putting the tig welder away Gasser Customs built a beautiful headlight surround, housing two gorgeous PIAA spotlights. They also mounted an adjustable LED light spot right above, just for added functionality when flying through the desert. Speaking of flying, Adam’s impression of how it rides is quite impressive. “My favorite thing about the bike is how it rides off-road. It doesn’t feel big and bulky at all, even though it is quite heavy. The big American v-twin torque down low just gives it the ability to effortlessly climb, and get you out of challenging situations.” Sounds like a good time to me.

This Baja Harley is just an incredibly cool machine, through and through. While there are only a few true ‘adventure Harleys’ in existence, it is bound to become a growing trend of machines thanks to shops like Carducci and Gasser Customs. 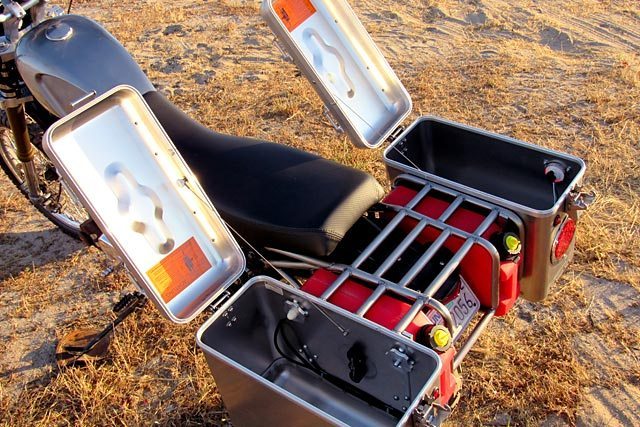 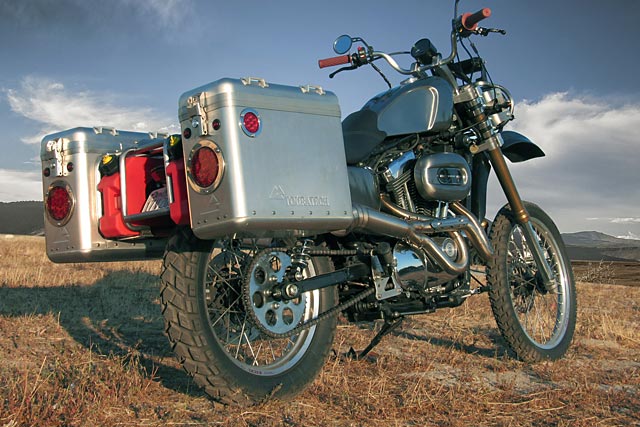 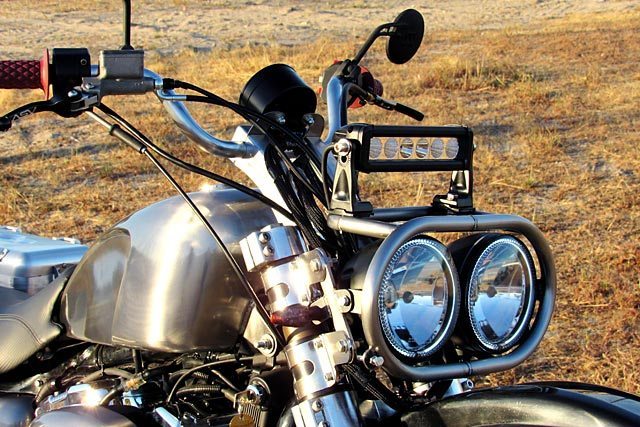 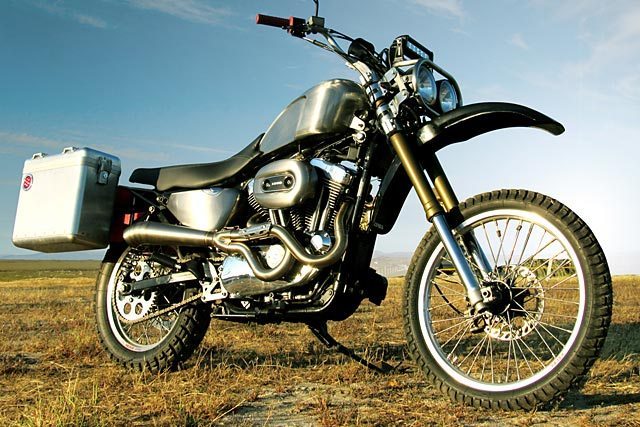 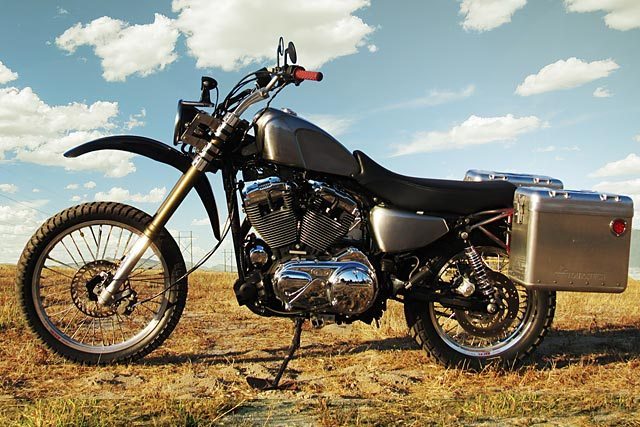