This year’s MotoGP season has been unfathomably good. Incredibly the season gets better and better with every race, to a degree that I didn’t think possible. And yet yesterday’s race at the famed Japanese Grand Prix not only lived up to the hype but may have set up for an end of season showdown for the ages.

Having been a lifelong fan, I honestly cannot recall a season that was contested this closely, let alone by so many different riders. The level of competition is quite incredible, creating a five-way fight for the championship, something rarely seen on the grand stage. But after 15 rounds, two men stand above the rest. Marc Marquez, Honda’s prodigal son, and Andrea Dovizioso, Ducati’s Italian underdog. What was once a battle, is now an all-out war. To be fair any other reading and you will inevitably encounter spoilers. This is your warning, if you have not been following this season go home, call in sick, and watch every. Single. Race. You will not be disappointed.

While attempting to write this, I have to admit I’m almost in shell shock. I can’t believe what my eyes are seeing, and I am a massive Dovi fan. And while the 31-year old Italian has always been a high caliber rider, he hasn’t been able to string it together enough to put himself in a competitive position. That is until now. For some much-needed perspective, from 2008 until 2016 Dovi managed just two wins. That’s 161 Grand Prix’s with just two wins. And it’s not as if Dovi hasn’t had a good seat, quite the contrary. He’s been a pilot for the factory Honda team. Yamaha’s well-sorted Tech 3 team. And then Ducati’s factory team from 2013 until now.

But DesmoDovi is as scrappy as they come. He hasn’t let the talks get to him, at least in a negative sense. At the end of 2016, Ducati signed Yamaha superstar Jorge Lorenzo, stirring many comments about ‘finally’ bringing a championship back to Italy. If I were a betting man, I would have to say those comments royally pissed off Dovi. In retrospect, I wish it happened sooner. As of yesterday, Dovi has won 5 of this year’s Grand Prix’s, tieing championship rival Marc Marquez. He came into this season with one of the lowest win averages on the grid and turned the field on its head. And he isn’t finished yet.

Marc Marquez is a man that needs no introduction. From the moment he stepped onto the world stage, Marquez has been an absolute wrecking ball. Marquez posses superhuman riding abilities, making the most difficult maneuvers look like a cake walk. Because of that raw talent, Marc has racked up 3 world championships, and he is still only 24-years old. He’s also the youngest man to ever win the world championship, and he did that his rookie year. 2016 saw Marquez clinch his title with three rounds to go, making the remaining races a moot point. It’s safe to say when he’s on, he’s almost unbeatable. Almost.

With 3 rounds remaining in this year’s championship we are locked in a dogfight. Dovi trails Marquez by a slim 11-points. It’s very much an uphill battle, but one Dovi has proven he is willing to gut it out for. Twice this year the two have gone head to head, and twice Dovi has come across the line first, if just barely.

The first real battle was at the Austrian Grand Prix. With 10 laps to go the two riders broke from the rest of the pack, locked into a dual for the ages. The high-speed Red Bull Ring made for an epic stage, Marc and Dovi did everything except throw blows, swapping positions with relentless speed. With both riders pushing each other to the absolute limit, Marquez goes wide at turn 1. Normally this would be race end, but this is Marquez we are talking about. The scrappy Spaniard pulls out two perfect laps, closing the distance with just one corner left. It’s now or never. Marc dives up the inside, forcing a pass deep into the corner. Dovi, in a brilliantly anticipated move, brakes just a bit harder, squares the corner a bit sooner, and shoots back up the inside, using the grunt of his Ducati to beat Marc to the line, ending one of the greatest last lap battles in history.

It’s the type of performance you assume you will only see once in a lifetime. Wrong. Because yesterday’s race at the Twin Ring Motegi circuit was just as good, if not better. And to add even more suspense, it was in the rain. Much like in Austria, the race came down to a brilliant last 3 laps. But unlike Austria, it was Marquez sitting out front, with Dovi forced to chase him down. While Dovi led a good portion of the race, things started looking a little glim for the Italian, with Marc holding a steady .4-second lead. That is, until, a massive mistake from Marc in turn number 8 nearly ended his race. With the massive rear end slide, Marquez’s lead evaporated, putting DesmoDovi hot on his tail.

In a moment of sheer will, Dovi rings out every ounce of grip that rear Michelin has in it, launching himself down the straight between 10 and 11. With his Desmosedici GP bucking and weaving through the mist, Dovi pulls off a spectacular pass entering turn 11, defying all levels of traction in the process. 3 turns to go and Dovi has just reclaimed the lead. Turn 12, turn 13, no change, until Marc once again dives up the inside of the last corner, the hail mary of motorcycling racing. And just like in Austria, Dovi is too wise, throwing his bike into a tighter line, squaring off the corner on his way to yet another victory. 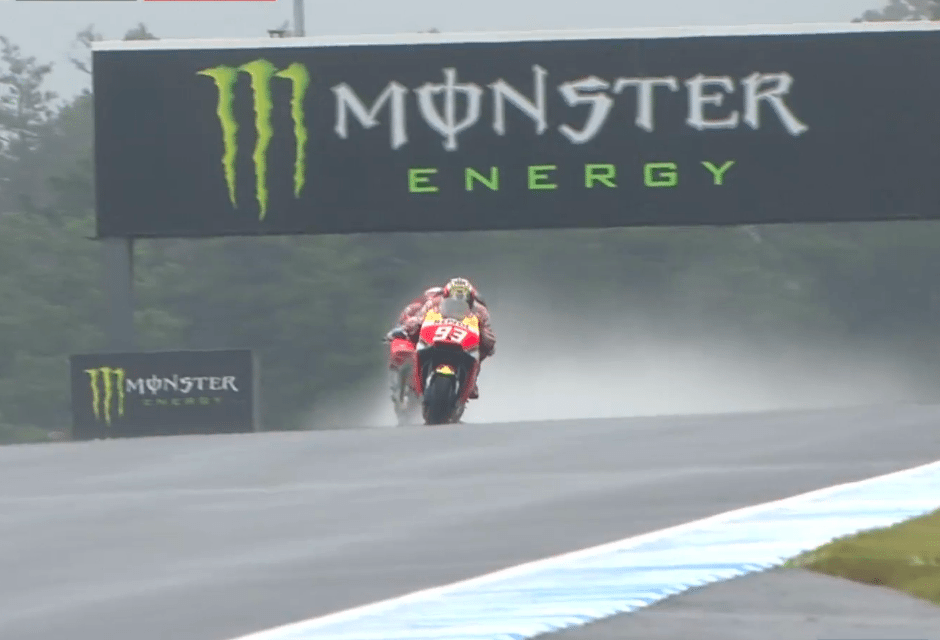 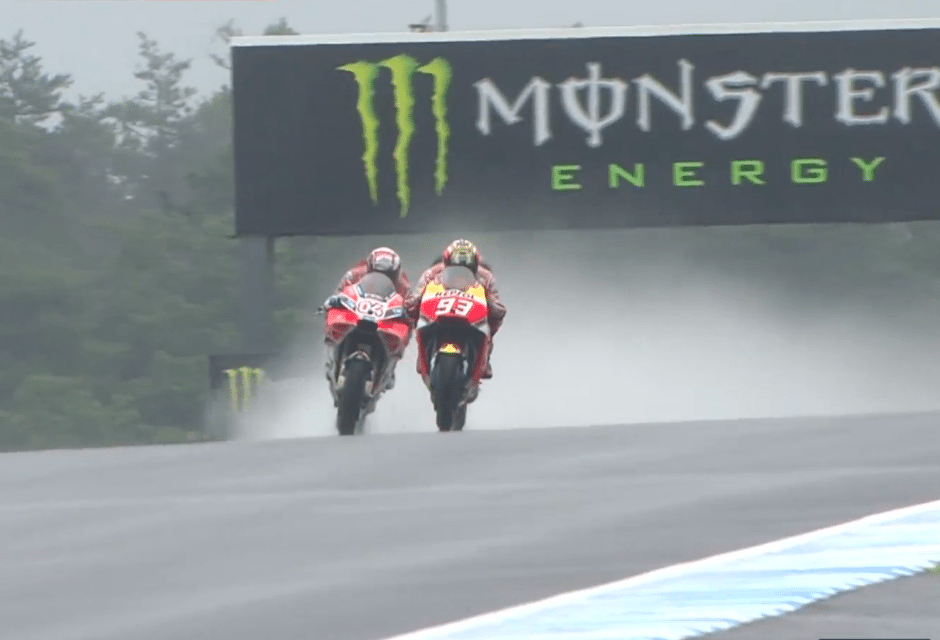 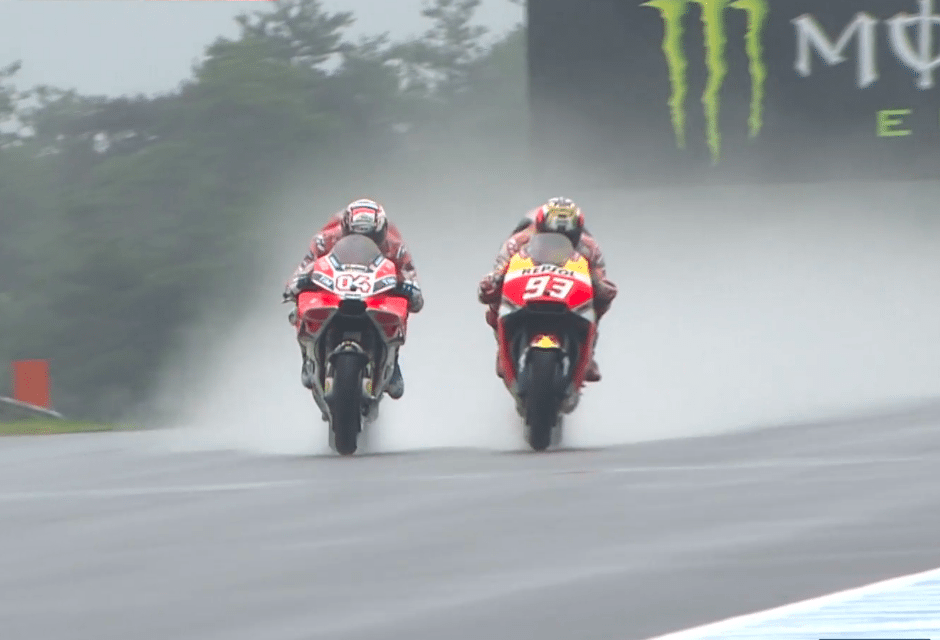 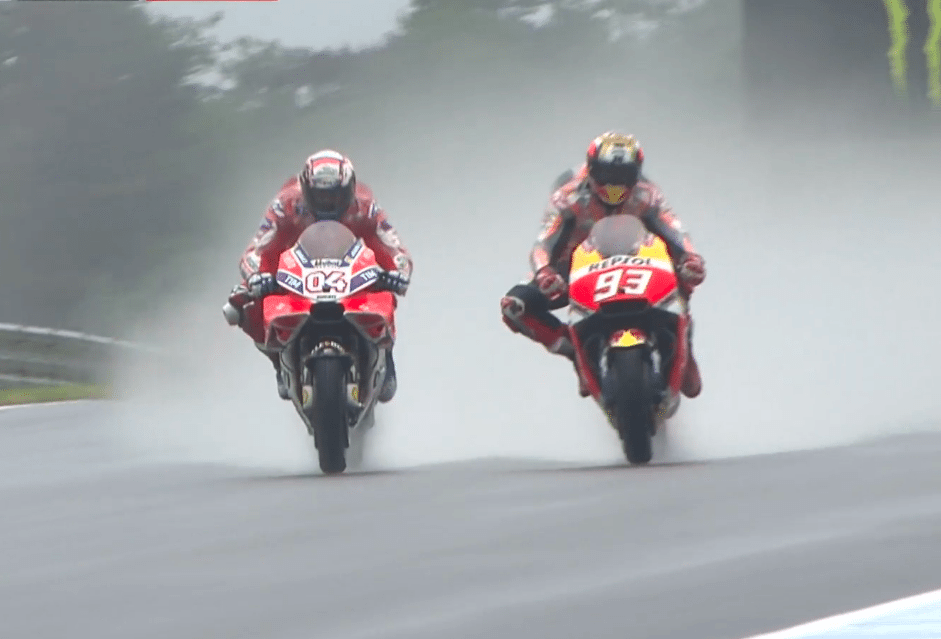 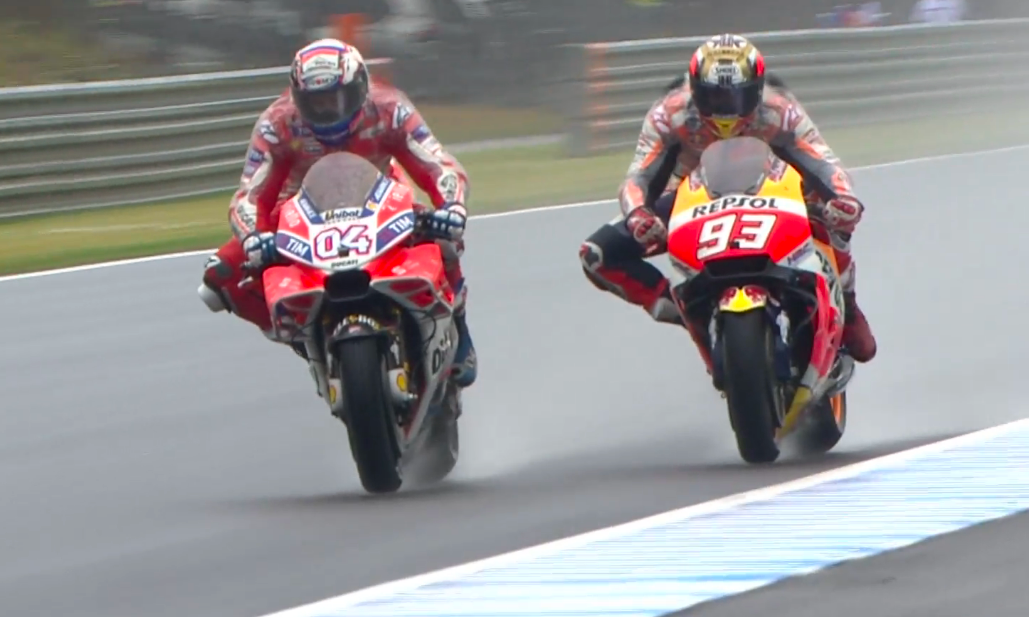 While both great races, with incredible finishes, I would have bet good money that we wouldn’t have seen a better last lap than Austria this season. If ever. I couldn’t have been more wrong. Austria saw Dovi fend off the wolf that is Marquez, a savvy rabbit that bought himself another day. But Motegi was a different story, one where Dovi became the big bad wolf. His blistering pace and constant pressure forced a mistake from Marc, and he pounced on the opportunity. When Marc fought back Dovi was ready, sinking his teeth in further.

The championship is now down to just 11 points difference, with the momentum firmly in Dovizioso’s corner. The next round will be contested at Philip Island in Australia, an extremely challenging track. It may be an uphill battle, but Dovi has shown time and time again that he won’t back down from the fight. 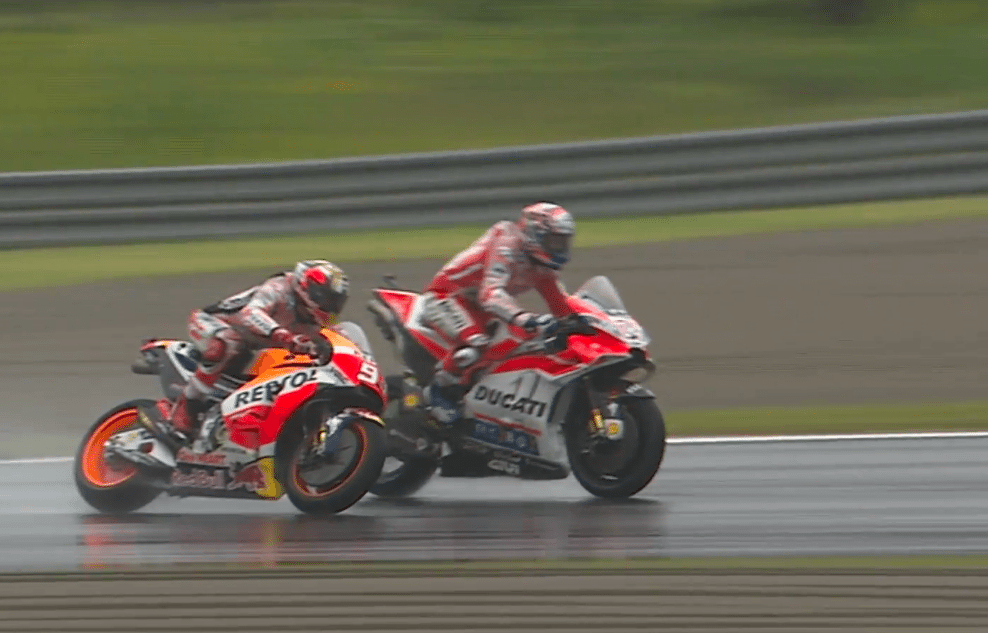 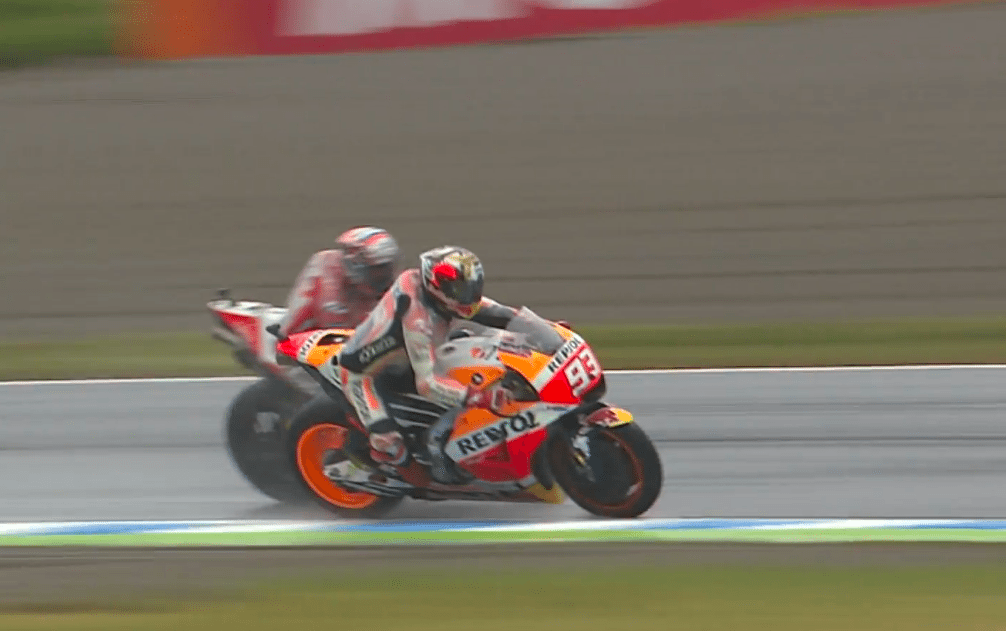 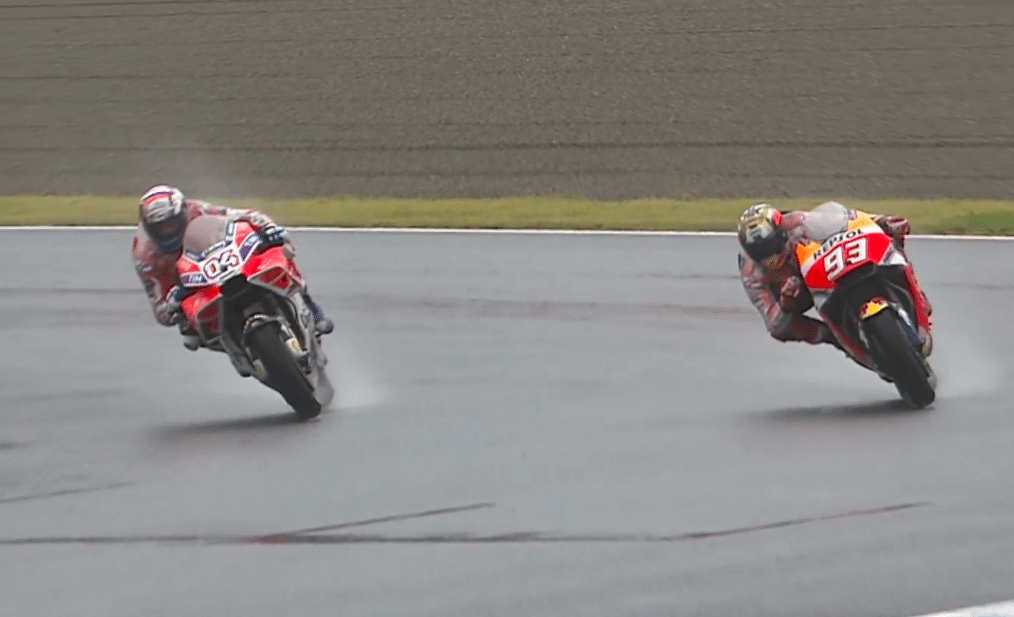 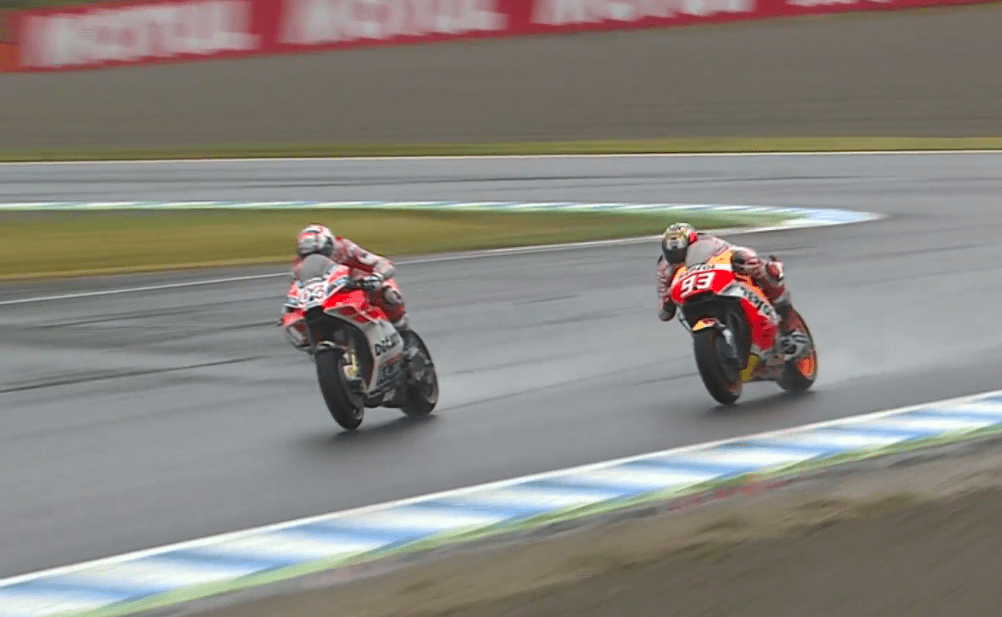 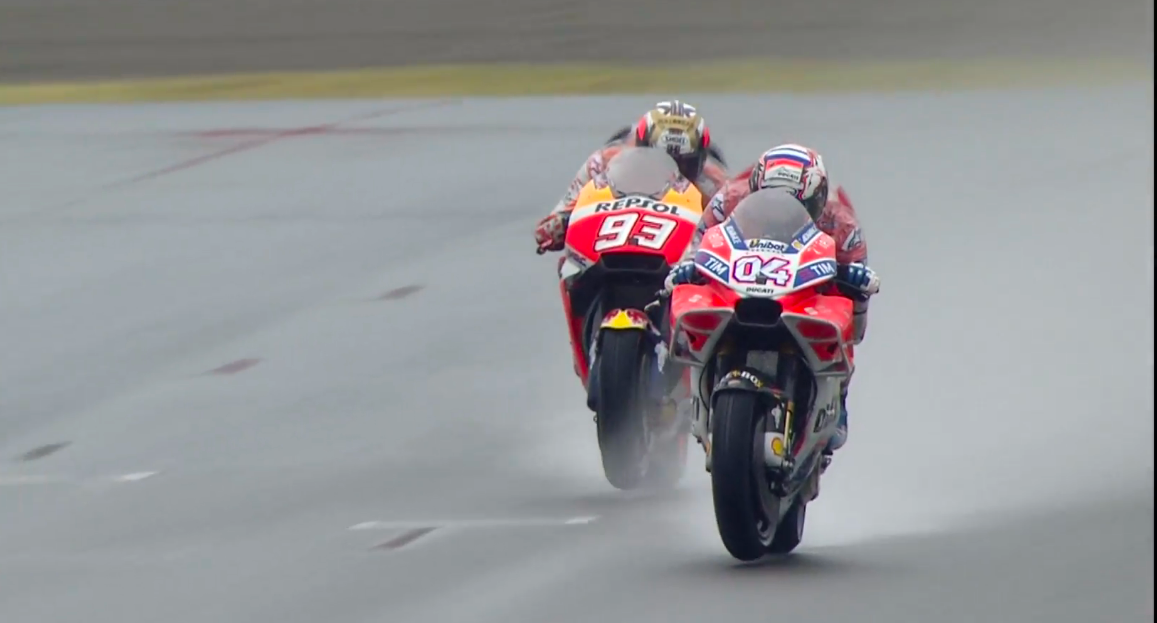